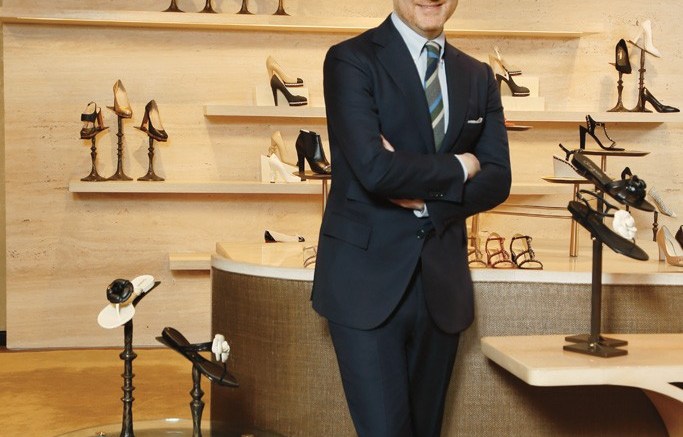 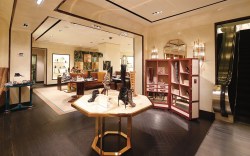 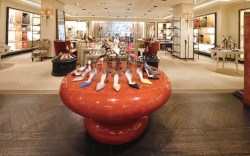 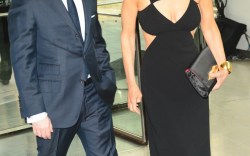 “I could spend all day on the floor just watching people. The energy here is one of a kind.”

That’s the sentiment from Joshua Schulman, who soaks up the scene inside Bergdorf Goodman’s venerable shoe salon on a busy Friday afternoon. The department store’s president greets his sales staff and shows off several exclusive Francesco Russo styles that have just arrived.

As he strolls through the space, Schulman immediately takes notice of what shoppers are picking up on this early spring day: “Look, she’s got Gianvito [Rossi],” he says proudly.

The executive relishes the opportunity to be at the center of the action, so it’s fitting that his office is six floors away. “There’s a great advantage to being right above the store. We look at a lot of reports and data, but nothing can match the experience of walking down to the floor, talking to the associates, meeting the customers, touching and feeling the product,” says Schulman, the former CEO of Jimmy Choo who also has held top roles at Gucci and Saint Laurent.

During his five-year stint at Choo, the executive helped craft and execute an aggressive growth plan that catapulted the label to the top of the luxury sector.

And Schulman isn’t wasting any time at Bergdorf, either. He has embarked on about 40 projects in his first two years on the job, among them an ambitious omnichannel push, a major men’s revamp and another expansion of the women’s shoe salon. “Working at a department store is much more of a jigsaw puzzle than when you are at a brand and have a singular vision,” he explained. “Here, you get a much broader view of the market.”

Now Schulman is plotting more big plans under a project called “BG 20/20” that will focus on the women’s business. He is working closely with a team that includes a mix of Bergdorf veterans such as fashion maven Linda Fargo, the store’s SVP of fashion office and store presentation, and Schulman’s own hires, including Tracy Margolies, the SVP and GMM of footwear, handbags, beauty and contemporary 5F who Schulman plucked from Saks Fifth Avenue. (Margolies started her career at Bergdorf.)

“In any company, it’s about the team you put together. They are the ones executing the vision,” said Schulman, who reports to Neiman Marcus Group President and CEO Karen Katz.

Part of Schulman’s vision includes fueling expansion in the hot footwear segment, which has always been a central focus in the women’s category. He is equally excited about the opportunity in men’s, a market that has taken off in the past few years.

“Obviously, I have a deep understanding and passion for shoes,” Schulman said. “It’s a business that has had tremendous innovation and that’s been important for Bergdorf. We were a pioneer in introducing the shoe salon as a more social setting. Clearly, that concept has taken flight.”

As major retailers here and abroad duke it out in the shoe floor wars, Schulman is determined to keep Bergdorf in a league of its own.

One of his first moves was to expand the women’s footwear space for the third time in recent years. The addition, which debuted a few months ago, evokes the same residential feel as the rest of the shoe salon. The new space is anchored by Chanel, while Valentino and Dior also get top billing. “One of the goals with the expansion was to improve the circulation,” Schulman said. “On a busy Saturday, the energy you feel at the top of the escalator now percolates throughout the entire floor.”

While the expansion helps pave the way for more growth, size is only one part of the equation for the executive. “We will never have the biggest shoe salon — or the biggest anything, frankly — because we have the smallest [footprint] of any of our competitors in the city or globally. What we have to win on is service, environment and product,” he said.

To that end, Margolies and DMM Nelli Terry are “laser focused” on what each brand means to Bergdorf, Schulman noted, and they’re editing the mix accordingly. “Our customer is at the center of everything we do, so when we look at a [style], we are agnostic about whether a shoe comes from a shoe brand or a ready-to-wear label. If it’s a great product, the customer responds,” he said.

One current standout is Italian designer Gianvito Rossi. “That is a brand the customer is choosing because of the product,” said Schulman. “It’s not because of flashy ad campaigns or celebrity placement. It’s simply beautiful product.”

He also cited Francesco Russo as another star in the making. “I usually defer to my merchant team, but in this case, we all walked in, saw the product and knew it was perfect for us,” Schulman said.

Other names creating serious buzz at the department store are Nicholas Kirkwood and Tabitha Simmons. “The LVMH investment can only be positive for the future of Nicholas’ brand,” Schulman said. “Tabitha is coming into her own. We’re excited about the way she’s grown as a designer.”

“Josh is an incredible mentor. From the very beginning, he dedicated time to meeting with me on a constant basis to review my collections and discuss my business plans. He is extremely knowledgeable,” Simmons said.

In the Blahnik business, for example, Bergdorf offers the largest assortment of the designer’s BB pump in the world. “If you can’t find the material, heel height or size you want, we can make it for you,” Schulman said, adding that the customization program is available both online and in store.

“Josh knows my product as well as I do,” said George Malkemus, Blahnik’s U.S. CEO. “He’s smart, enthusiastic and the new blood that Bergdorf needed. He has put his stamp on a lot of things that were already going very well.”

Under Schulman, brands such as Blahnik and Choo not only get prime placement in the main shoe salon but have a presence on the 5F contemporary floor as well.

“We noticed that the coolest girls are wearing contemporary ready-to-wear with luxury shoes,” said Schulman, who has rolled out a series of pop-ups such as the Jimmy Choo biker installation and the Manolo Blahnik “BB bar.”

“This is a business we’ve reinvented over the past five years,” he said of 5F. “Two years ago, the best-selling shoe was a $295 pump. Now our key pump on this floor is Manolo at $595. We’ve elevated the assortment and we have a powerful brand mix.”

Besides adding more upscale names to that department, the retailer also exited 30 brands between footwear and apparel as part of the overhaul, though Schulman declined to be more specific.

Similarly, reinvention has been the key theme across the street at the men’s store, which is undergoing the final stages of an ambitious renovation.

The men’s “Shoe Library” on the first floor, which opened in late 2012, was a significant part of the revamp. The new department opened as that category began to experience a resurgence, led in part by women’s brands who found new opportunity in the once-elusive men’s market.

“Women have a deep emotional connection with their shoes, and we’re starting to see men have that same type of connection,” Schulman said. “They’re feeling more free to experiment with their wardrobes, and the offering has gotten much more interesting. Many brands that have seen the potential in women’s shoes are now applying the same kind of innovation to men’s.”

One such label is Christian Louboutin, which has limited distribution in men’s but partnered with Bergdorf on the burgeoning business. In addition, the men’s segment has “exploded” for fashion houses such as Givenchy, Lanvin, Valentino and Saint Laurent, which Schulman cited as leaders at Bergdorf. Tom Ford has become a major force, too, “and that’s a brand that didn’t exist 10 years ago,” he added.

One of Schulman’s biggest accomplishment in men’s was the opening of a shop-in-shop for Berluti last December. (Bergdorf has the wholesale exclusive for the LVMH-owned label in the U.S. market.)

“That is a brand that was born in shoes, but now it has blossomed into an entire lifestyle brand. They have a clear vision, a true authentic legacy and they have benefited from smart management and significant investment,” he said.

Then, there are the emerging talents, such as Louis Leeman and Max Verre. “If you go back five years, men’s was very static, almost a commodity business,” Schulman said. “These brands are bringing a lot of [newness] to the market.”

Turning back to the broader business, Bergdorf’s president declared it’s full speed ahead as he moves into his third year on the job. “This is a great team that’s used to multitasking,” he said. “There’s more to come.”

The evolution of the footwear market:
“During the last 20 years, you saw a transition from the Italian factory brands to the rise of the big three: Manolo Blahnik, Christian Louboutin and Jimmy Choo. Now all the fashion brands — Saint Laurent, Balenciaga, Givenchy, Prada — are participating in the shoe business in a significant way. There is a new generation of designers who are coming of age in an era where shoes have been one of the most talked about and most exciting parts of the business. ‘Sex & the City’ was 15 years ago, so they’ve only known this type of excitement.”

The omnichannel equation:
“You can’t overstate how important technology is to our customers’ lives. We empowered all of our associates with iPhones. Just watching how they interact with their clients, it’s changed dramatically. During the polar vortex [this winter], I would go downstairs and ask our associates how business was. Even on a day when it was gloomy out, they were doing transactions on their phone, taking pictures of the product and engaging the consumers.”

How his past experience comes into play:
“At the places I’ve worked before, we always thought of ourselves as retailers, operated our own stores and looked at the wholesale business through a retail lens. I never looked at it as wholesale, even though a lot of my career was spent dealing with retailers. In this role, [I have] a slightly different perspective [than my peers] and a little deeper understanding of what our vendor partners are trying to achieve.”

Bergdorf Goodman’s history:
“One of my interests is department stores, particularly grand old buildings like this one. Bergdorf is a great place with a lot of deep roots and interesting stories. In a building as historic as this, people sometimes get attached to a certain part of it. The reality is if you go back in history, everything has moved around. Back in the 1970s, there was an art needlework department, which was Mrs. Goodman’s passion, on the ground floor. There was a Delman leased shoe department on the ground floor. There’s nothing in the building that has been the same for the entire time. You always need to refresh.”

Retail competition:
“We’re really focused on our customer. Everything we do is through that filter. We know there’s a lot of competition, and it isn’t just in big buildings within a 10-block radius. It is everywhere, and our customer leads a global, interactive life. She is very plugged in to what’s going on all over the world. Our mission is to provide her with the best product and the best customer service.”