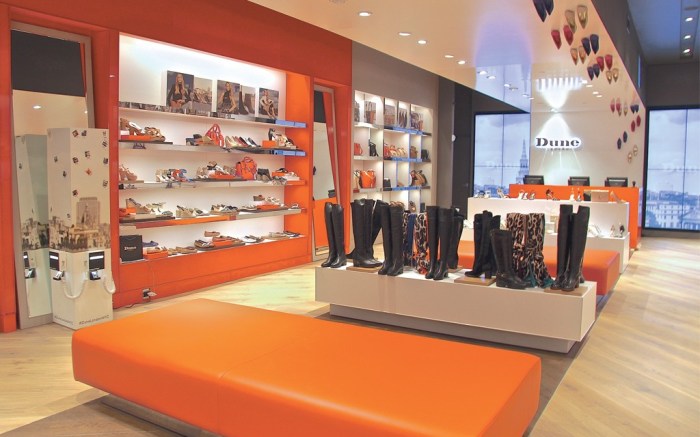 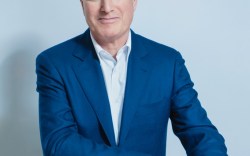 On opening day at Dune London’s Soho flagship store in New York last month, a line formed outside on Broadway, next to an iconic red British phone booth.

Company Founder and Executive Chairman Daniel Rubin approached his inaugural U.S. location, and an employee said, “We’re not open yet.”

With a smile on his face, Rubin responded, “I own the store.”

The launch was a major moment for the British executive, who is determined to make a big statement stateside. But he knows it won’t be easy. “It’s been a tricky market for U.K. retailers, but we’ve done a lot of research and we’re feeling confident,” Rubin said. “It’s always good to expand when you’re trading well in your home territory.”

The Soho spot — which features the London-based company’s new store concept that includes a “reverse catwalk” on the ceiling — marks the beginning of an aggressive U.S. push. The 22-year-old Dune Group aims to open 20 to 30 stores in the U.S. over the next three years and has already inked a deal for a 2,300-sq.-ft. store at the World Trade Center, in Tower 1 at Westfield Center.

The locations are heavily playing up omnichannel initiatives, with iPads in store to connect consumers with the company’s website.

“They are very effective. We’ve made significant investments in technology, and those are beginning to pay off,” Rubin said.

Overseas, the company also recently set up shop on Oxford Street in London and in Mumbai, India. Worldwide, Dune operates more than 300 stores, plus franchised locations in areas such as South Africa, the Philippines and the Middle East.

As he ramps up retail expansion, Rubin is also banking on trend shifts to fuel further growth across the brands. (Dune London retails for $80 to $300, and Dune Black is slightly higher-priced at $200 to $400.)

“A lot of [trends] are happening and that’s exciting for us, because we are a dressier brand and a lot of those fashion trends suit us well,” Rubin noted.

Here, Rubin talks about finding the right strategy for the U.S. market, the economy at home and new categories he’s eyeing.

What’s your view of the recovery in Europe? Is there still a long road ahead?
DR: There are big differences within [the market]. We still have this problem where inflation is higher than the rate of wage growth. The U.K. is somewhat separate — it’s a blessing that we don’t have the euro. It’s a mixed picture, but generally speaking, the euro zone is struggling. But in the U.K., there is a growth in confidence, and there does seem to be more of a feel-good factor.

Overall, what are the biggest challenges of entering the U.S. market?
DR: It’s much more global [than other markets]. But there is a commonality of product — what’s a best-seller in the U.K. is a best-seller in New York and Dubai, [United Arab Emirates]. But we want to try to gauge the differences, too. How do we adapt the product in this particular market? We don’t want to do too much or we lose the brand identity, so a maximum of 30 percent [of styles] could change. We’re going to be using the next three to six months to test the market and find out [what sells].

We’ve seen other British brands such as Kurt Geiger close their stores in the U.S. Why do you think your brands can succeed?
DR: I have a huge respect for them; they are a great company. I believe [the main issue] was pricing. In places like Harrods and Selfridges where Kurt Geiger dominates, they can afford to price quite fully. [In the U.S.], they were neither a premium brand nor a mid-market brand. We want to be competitive, and our pricing strategy is to be exactly the same as in the U.K. That’s the lesson we’ve learned. Obviously, you don’t want to underprice, but value is hugely important to us.

Is there a sweet spot in terms of price point?
DR: Michael by Michael Kors and all of the brands at the $99 mark is the core; there is no point in being $120. We also have our Dune Black all-leather label. We are more expensive than Nine West, Aldo and Steve Madden, but still very much in that space.

Explain the importance of setting up shop in Soho.
DR: It’s a major opening. It’s our biggest location outside the U.K., and I’ve been looking for a store for the past five years. We were thinking about high-density areas, including Prince and Spring streets. But in the end, we thought Broadway had a good mix. You’ve got Prada, but you have Forever 21, it’s very much our target market. The stores on Fifth Avenue are too big for us. Soho suits us well; it’s the right demographic.

Are there additional areas on your radar for retail locations?
DR: We will open in the World Trade Center in Westfield next year. I would be disappointed if we didn’t have 20 to 30 stores over the next two to three years. Once we see evidence that the brand has traction, then we will look for six to seven stores in New York, Los Angeles, Miami, Chicago, Las Vegas and San Francisco. We want to stick to the major shopping areas.

What are some more ways you plan to build the brand in the U.S.?
DR: We are also focusing a lot of effort on the wholesale operation, selling into Nordstrom, Zappos.com, Belk, Lord & Taylor and Piperlime.com. Our dedicated U.S. e-commerce site launched at the end of last year, and we see the U.S. as a key area for growth of our business.

Any other markets that are ripe for expansion?
DR: The U.S. we see as a real opportunity, but we want to get into China, and we are looking at a flagship store in Hong Kong. We’re looking at Mexico, Iran, North Africa and many different countries. We recently opened a store in Mumbai. We also refitted all of our stores in London. The biggest change we’ve gone through is opening much bigger stores. We’re now offering a full range of men’s, women’s and handbags. When we started, we had small stores selling just ladies. Some of the older stores that are too small and too feminine is where we’re struggling. We’re going through a process of [revamping] with our new format, the reverse catwalk. With that concept, we’ve seen a growth of 20 to 30 percent. That’s certainly been our formula for success over the last two years.

What category expansion are you planning for Dune?
DR: Handbags have been outstanding, and we’re making Dune into more of a lifestyle brand. For winter, we’re launching perfume. We’re doing watches, and we’ve had a very good reaction to jewelry and scarves. The men’s business is strong. Guys are getting more fashionable, and we have a lot of opportunities with men’s accessories that we haven’t tapped yet.