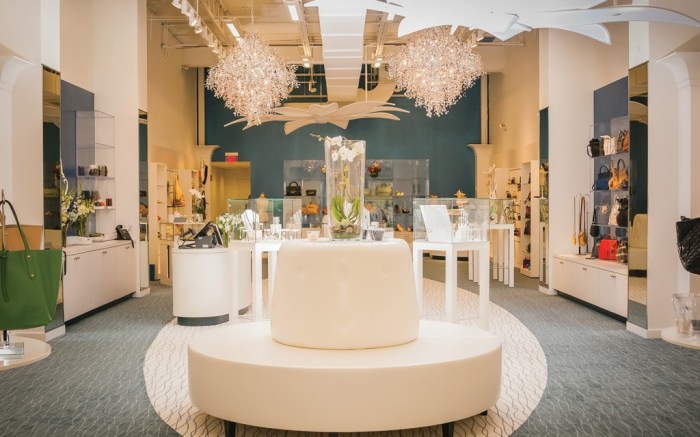 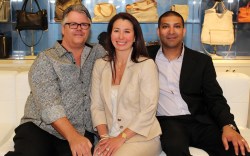 The name refers to the store’s mix of shoes, handbags and jewelry, but also could apply to the people who made it happen. Co-owners Jody Strauss-Figura and Tony Patel, along with buyer and store manager David Sugg, met several years ago when they worked together at the now-shuttered, high-end shop Shirise in nearby Glencoe, Ill., and estimate they have a combined 50 years of retail experience between them. The partners saw a void for a luxury shoe purveyor in Deerfield, Ill., and opened Tria in March.

“Our customers at our last job were telling us they couldn’t get what they wanted on the North Shore. Tria started as a joke that wouldn’t it be great if we had our own store, and then it just became the business plan that people got excited about,” said Sugg. “Things fell into place [from there].”

The group designed the 5,000-sq.-ft. space to stand out from other retailers and help lure a well-heeled consumer. Glossy, modern white fixtures set against deep-blue walls and feminine chandeliers give the location a classy and welcoming feel. In addition to the large selling floor, the Tria team built a second level upstairs to accommodate the inventory.

“Our whole goal is to be a breath of fresh air,” said Sugg. “We wanted to look different from the rest of the Chicagoland area and get a mix of vendors not seen on the North Shore.”

The store now carries about 50 international designers and brands that range from Oscar de la Renta and Rupert Sanderson to Arche and Splendid.

In addition to a breadth of product, Tria looks to offer the personal attention customers value at independent shops.

“Our customer service is the central focus of everything. We want to build relationships with our clients. We know their kids and dogs and sports teams,” said Sugg.

The focus on the customer has helped inform their buying, too, he said.

The store’s mix leans toward more casual looks, with a goal to constantly introduce new designers and styles. For fall, Tria has lined up Laurence Dacade, while Casadei and Jerome C. Rousseau were recently added. The store also scored the independent exclusive for L.K. Bennett in the area.

In addition to shoes, Tria stocks handbags from such labels as Jason Wu, Diane von Furstenberg and Henry Beguelin, and also offers jewelry.

Designer Jerome Rousseau said he visited the store in April for several days and was struck by the owners’ expertise and commitment to the brands they carry.

“They do such a great job buying the styles that tell the story and the inspiration of each collection,” Rousseau said. “Tria was a good fit for me because of the people there. I know they can show customers my line and help get my shoes on their feet because of the trust [between them and their customers]. It’s a great match for not just my line but any line they sell.”

“The [owners] wanted a store that provides the client with the best choice of shoes,” said Guiguin. “When they’re making that selection of shoes, they’re thinking about their client in terms of what they can or will wear.”

Marketing for the new shop has been largely driven by word of mouth and previous relationships with customers. Tria’s carefully chosen location in The Shops at Deerfield Square also has proven to be a prime asset for pulling in wealthy shoppers from nearby areas who are visiting the center’s yoga and fitness studios, book store and lunch spots.

Still, the partners have decided against further expansion. Strauss-Figura said they are more focused on getting the concept and brand mix right in the one store, and becoming an important destination for the North Shore shoe shopper.

They do, however, plan to develop Tria’s e-commerce business, which they said has always been part of the business plan. Later this month, an online shopping platform will debut and offer the same selection available in the store.

“This is just something you have to do [as a business owner today],” said Strauss-Figura. “When we opened the store, we knew we wanted it to be done right. We wanted the same to be true for Tria’s website, so we waited until we were ready to do both.”

The site also will continue Tria’s emphasis on customer service, as the platform will be handled in-house.

“I am striving to make Tria that special place and destination,” Sugg said. “Customer service will make or break us, and we all come from making relationship with clients, not just being a salesperson.”