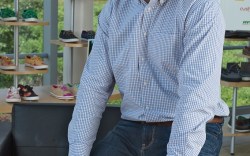 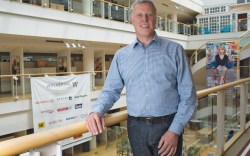 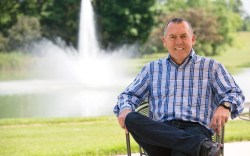 Blake Krueger has been busy stacking the executive deck.

On June 16, he tapped Jim Zwiers to lead Wolverine World Wide’s international efforts, elevating him from president of its Performance Group. He also announced the hire of two other big names: Jim Gabel and Andy Simister.

In a company that prides itself on promoting from within, Gabel and Simister will be charged with bringing a unique perspective to Rockford, Mich.-based Wolverine.

“With any new senior leader in the business, what you hope for is that they bring something new and fresh,” Krueger said.

Their resumes prove they are up to the job.

“Jim [Gabel] is very familiar with the entire North American market and very familiar with dealing with a company with a global view of its brands, growth and product development,” Krueger said. “He’s obviously a seasoned executive, a proven leader, and a great general manager and group president.”

“Keds, Sperry and Stride Rite Children’s, when we acquired them, had very little international distribution,” Krueger said. “Andy is used to taking a global view for brand building. He brings an intense focus and knowledge base to help develop those brands and accelerate the growth of those brands around the world.”

For his part, Gabel said the international view that the position offered, as well as the team in place, drew him to the job.

“I had met Jim Zwiers at a CEO summit five years ago for Footwear News, and I had heard a lot about Wolverine,” he said. “They have exceptionally talented people and a great work environment. I’ve had the good fortune to work with good brands, but I’ve never had a global mandate before.”

Gabel said he will continue the search for back-end efficiencies while keeping the brands distinct to the consumer and push for a more global outlook.

“We need to expand our global product development to have more consumer points outside North America and enhance our efforts online for storytelling and launching product,” he said. “And in my experience [our product launches] really are global, and that’s what our distributor network and what our customers internationally are looking for.”

Simister agrees with the international approach to business.

“It’s a domestic business, in essence, but the brands and appeal are global,” he said. “I can see phenomenal opportunity to stretch the business across the continents.”

But to do so will mean doubling down on fundamentals domestically, he explained: “Before we can seduce our partners overseas, we have to be absolutely capable of doing it in our market.”

Ted Gedra, who oversees the Wolverine, Bates, Sebago, HyTest, Harley-Davidson Footwear and Caterpillar Footwear brands, said he expects to have as tight of a working relationship with the two hires as he did with their predecessors.

“We’ve got two new players, but I don’t see any change,” he said. “We have to be aligned. Not on all things — every brand will do things slightly different — but we can’t appear to be not in sync and going in different directions.”

Jerry Stritzke, president and CEO of Kent, Wash.-based retailer REI, said working with the Performance Group under Zwiers has been smooth — and he’s expecting that to continue.

“Footwear is one of the most complex categories you can do business in, and Wolverine executes flawlessly,” he said.

“One of my philosophies has always been to hire and promote people better than me,” he said. “I’ve always believed that if you can do that in life, you have a chance to be a whopping success. I would say with Jim Zwiers for sure, I’ve proven to have done that. And with Jim Gabel and Andy Simister and Jim Zwiers’ new promotion, I’ll be batting three-for-three in that regard.”