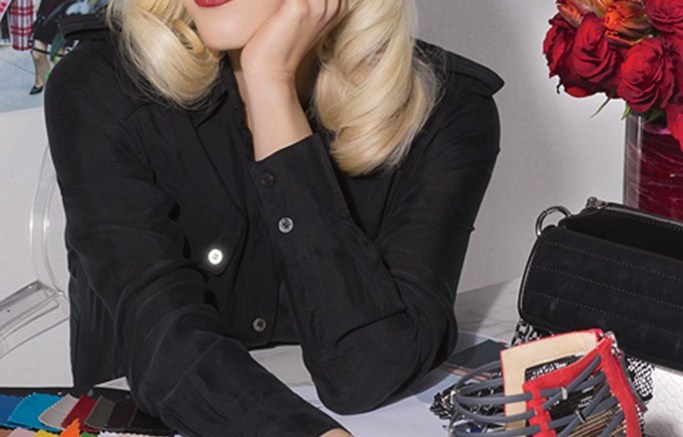 NEW YORK — For Titan Industries Inc., 2014 is all about rebuilding.

After a shaky past year, the Huntington Beach, Calif.-based company is updating its portfolio in a bid to become more competitive. For spring ’15, Titan will launch Gx by Gwen Stefani on a broad scale, partner with comfort line Olivia Childs and take over the license for Cynthia Vincent footwear.

The new lines will join four other licensed brands at Titan — L.A.M.B., Badgley Mischka, Joe’s Jeans and Charles Jourdan — plus in-house brands Penny Loves Kenny and French Follies, for a total of nine labels. (Titan recently severed ties with comfort brand Flogg . The firm has partnered with a rotating cast of brands over the past few years, including Bebe, Betsey Johnson and CeCe L’Amour. )

“We’ve had an amazing run here, and then we hit a wall in 2013,” Titan CEO Joe Ouaknine said. “The biggest challenge we had was that dress shoes were dead and not selling. We decided to make some changes, and things are already looking better.”

After producing Gwen Stefani’s L.A.M.B line for about a decade, the firm is taking its relationship with the pop star further with the launch of a lower-priced line called Gx by Gwen Stefani.

The collection, which retails for around $100, launched exclusively on ShoeDazzle earlier this year and will roll out in department stores, including Nordstrom, and independent boutiques for spring ’15. Since its launch, the line has perfomed well on the ShoeDazzle site.

“Gx has performed very well for us and exceeded our expectations from a sales perspective,” said Tim Callahan, SVP of merchandising for the site. “The collection has resonated well with our clients. Everything is accessibly priced yet on trend.”

Ouaknine echoed the importance of smart pricing for the collection in the $100 sweet spot. “[With Gx], we need to be more creative with the design so we can make the product as great as L.A.M.B. but available at a more accessible price,” Ouaknine said.

The executive, who has been working closely with the songstress on the product, said colorful high heels and wedges with intricate uppers and a few tomboy elements are on deck for spring. “Gwen is the coolest person I know. She’s patient, she’s engaging, and it’s her taste,” he said, adding that Stefani’s exposure will increase further when she joins on-screen singing competition “The Voice” as a judge in September.

For her part, Stefani told Footwear News that her decade-long partnership with Titan made the company a natural collaborator for the new line.

“They work hard to execute my aesthetic and work with us to make [product] that not only has style and attitude, but are also high quality and priced well,” the singer said. “Before we started working on Gx, they showed me they had the ability to source and manufacture really impressive product.”

In addition to the launch of Gx, Titan is also diving deeper into the comfort market. The firm unveiled Olivia Childs, founded by Julie Johnson in 2013, at the FFANY show in June.

Of her decision to partner with Titan, Johnson said, “This enables me to make sure I have great production. I will have more access to materials and metals, and it opens me up to have much more creativity with the brand.”

The collection, priced around $150, features detailed wedges and elevated ballerina flats that sell at independent boutiques.

Ouaknine said comfort brands can be more reliable, in terms of staying power, than fashion labels that rely heavily on trends.

“I’ve always been jealous of companies with a comfort business,” said Ouaknine, who dabbled in the business with Flogg. (After two years, Titan is ending its relationship with Flogg, whose designer, Carol de Leon, is moving forward with the brand on her own.)

That move enabled Titan, who had already been working with Cynthia Vincent on production, to add the designer as a licensee, according to Ouaknine. For Vincent, she is excited to spend more time on what she’s most passionate about: design. “Logistics took up too much time, and the product didn’t get my full attention,” said Vincent, who first launched her footwear division in 2006. “Now my [goals] are more tangible. I have a lot more support in bringing the shoes back to where I started.”

While on her own, Vincent was working with factories in the U.S., Italy and Portugal. Now Titan will move manufacturing to China and Mexico, which will enable the brand — sold at Bloomingdale’s, Saks and Neiman Marcus — to slightly lower its price points. Down the line, Vincent also plans to launch a contemporary line, CV, with the Titan family.