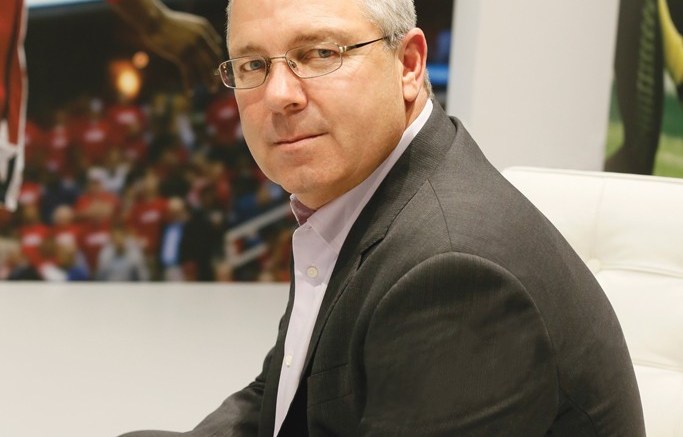 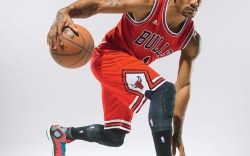 Mark King is pretty sure he knows why he’s in the top spot at Adidas America.

Speaking from the recently opened showroom in New York’s West Village neighborhood, the exec — who took over the reins as president of the Portland, Ore.-based company in June after former head Patrik Nilsson left to lead Swedish apparel company Gant — said his appointment is a sign that the German giant wants to do things differently.

“I’m hypercompetitive. I do not like to do things the way everybody else likes to do them. I like to stand out. I like to be the center of attention. And I believe that fortune favors the bold,” said King, 55. “I will go down swinging. I will either hit a home run or I’ll strike out — it’s one of the two — and I think right now, for us, that’s important.”

King, who rose through the ranks at TaylorMade Golf to CEO in 2003, has been part of the Adidas organization since it bought TaylorMade 14 years ago.

“After 34 years of being in one industry, to be able to touch all these sports like this is, for me — being a sports guy from the Midwest — exciting,” he said. “Yeah, there are tremendous challenges, starting with tough competitors and a business that has been growing but not at the same rate as our competitors. But the way I think about it, it’s a great opportunity to do things in a bigger way and bolder way.”

Herbert Hainer, CEO of the Adidas Group, said King brings a history of success to the table. “With Mark, we have an outstanding leader. He is the architect of TaylorMade’s rise to the No. 1 position in the global golf market over the last decade. I am very happy [he] has agreed to lead our North American business into a successful future.”

According to Matt Powell, an analyst at SportsOneSource, King has several issues to address. Year-to-date market share for the brand in footwear has fallen to 6.2 percent across the sports category in the U.S., down from 8.2 percent last year, with share in basketball shoes down to 3 percent from 5 percent, and in casual down to 15.5 percent from 22.5 percent. And while a small uptick in running — at 3.4 percent share vs. 3.3 percent a year ago — could be promising, failure to deliver significant quantities of the brand’s Boost shoes have meant leaving share on the table. It’s been a tough year for the Adidas parent company as well, which reduced guidance and dropped into the No. 3 spot (behind Under Armour) in the U.S. sportswear market for the first time.

A strong casual product pipeline checking well in Europe, strong assets in basketball and growing positive response to the brand’s casual offering should help catalyze new plans, he said, adding, “The horizon looks much better than the current picture.”

And retailers agree. “He’s a very successful executive who knows the company very well and understands the U.S. market well, and who will be a good leader for both Adidas and Reebok in the U.S.,” Ken Hicks, president, chairman and CEO of New York-based Foot Locker, said. “I have talked with him several times, and we look forward to working with him — he’s just now getting his feet on ground, [but he] will have positive impact.”

Here, King tells Footwear News what he’s doing to grow market share and why Adidas is ready for an American invasion.

With 90 days under your belt, what strikes you about the Adidas business you’ve taken over?
MK: We have incredible opportunity to grow market share in every place we compete: training, running, basketball, you name it. We have enough products out there that are doing well, like Boost running or Flux, [to know] that when we get the product right, consumers will buy it. We just have to have a tighter focus on where we want to win, invest more money and be committed to driving market share over an extended period of time through product, marketing and execution. I think the world is waiting for us to be better. And we’re going to be better.

What direction have you been given by Herbert Hainer and the global team at the head office in Herzogenaurach?
MK: I try not to talk to them. [Laughs.] No, listen, I’ve worked for Herbert for 14 years, and when he asked me to do this, I was honored, thrilled and excited. And they’ve definitely made my fairway wider than they did for Patrik [Nilsson], for a couple of reasons. One, I think they learned that we needed more creativity, and two, they know I’m a disruptive guy and that’s why they put me in here. They didn’t want their prototype guy to come in and do the same old thing. I want to be as bold and as controversial as they will let me be, because anything short of that will result in incremental improvement. And we need more than incremental improvement. We need something big and different.

Adidas has been criticized in the past for not fully understanding the American market. Is that fair?
MK: Well, honestly, it’s very fair. But what I would say is this: One of the reasons they hired me is because I’m American. I have this passion for U.S. sport, and they want to — for lack of a better way to describe this — “Americanize” the Adidas brand. Eric Liedtke, [the new head of global brands on the board], is moving the head of global design for all product, [global creative director Paul Gaudio], who’s an American, to Portland. He’s moving the head of brand communication, [VP Ryan Morlan], who’s an American, to America. These are big, bold changes for a German company. So I think everything you said is fair, but that’s not the future. The future is about let’s create an Americanized brand called Adidas that resonates with the American athlete.

What does that look like stateside?
MK: We certainly need to be more visible in American sports — football, baseball, basketball, volleyball, softball, lacrosse, field hockey. My first priority is to build a plan that allows us to have a foundation that we can grow on every year, and then be in search of something that changes the dynamics of the marketplace. Because the only way we’re going to see a quantum leap in business is to completely reinvent the space.

Is that a refinement or a repudiation of the Route 2015 strategy that focuses on the high school athlete and has been the Adidas America playbook for the past few years?
MK: It’s an intensification of that. I don’t think we were very successful in getting athletes to use more of our products. Certainly we have a very solid business, but it’s not growing the way it needs to. We’re going to make a major investment in getting athletes — kids, youth, high school, college, pros — to use our equipment. I would hope that 18 months from now, you’d notice that there are more college, high school and club athletes wearing our cleats and our apparel.

To that end, will you pursue more endorsements or partnerships?
MK: We have league relationships now, so to me it’s not more leagues, it’s more athletes that play the game starting out as kids. We have a big opportunity with kids and the youth programs.

What else does that include?
MK: We definitely need to advertise the essence of our brand, and do it consistently. And we’ll take a couple of categories to begin with — running and basketball and maybe Originals — and say yes to more things in those categories.

What are those things you plan on saying no to?
MK: Anything outside of running and basketball and Originals. The fewer things you do, the better you will do those things, and the more impact they will have, and, ultimately, the stronger brand halo they will have on all of your other categories.

Are those permanent focuses?
MK: As you start to get market shares that are strong, you can look at other categories. But brands are defined by a couple of things, and those couple of things allow you a platform to sell all of your other products. So [for] smaller categories like action sports or tennis, I think you end up doing better there having a strong brand in a few big categories.

What kinds of marketing are you looking at?
MK: You’ll see more consistent, big advertising campaigns around the brand. This year, for example, you saw a lot of advertising on ESPN during the World Cup, but other than that, you didn’t see a lot. We have to have a presence every quarter, not only in digital, but also on TV and in print. We need to speak to the consumer on a regular basis. I think you’ll see ways that we execute running and basketball and Originals [more fully] at retail, whether it’s within our own retail stores or partners like Dick’s or Foot Locker. And what I mean by that is, bigger spaces, better storytelling and advertising that’s connected.

Adidas made waves when it signed, among others, Kanye West and Pharrell as brand ambassadors. What role will they play in reaching the American market?
MK: I don’t know much about the role that Kanye West and Pharrell are going to play in terms of product execution. What I do know is that cultural icons are playing a bigger and bigger role [in terms of influencing young athletes]. So I think there’s an incredible advantage to having a connection to their culture and lifestyles. How we use those [icons], however, is going to be the challenge.

What do you mean?
MK: We’re an athletic performance brand, and whether it’s on the performance side or the style side, it has to be driven by athletes. Otherwise, it’s not authentic. But the hot debate is, how do we put those two together to be authentic to sport? You probably won’t see much in the next year or two, but when you wake up three or four years from now, you’ll see a very different Adidas in terms of how we blend performance and style.

You also took over responsibility of the Reebok business, which was moved under Adidas in North America in late 2013. What’s your outlook there?
MK: The brand is in a fantastic place to develop and own a place that nobody even competes in today. The largest participation sport is fitness or exercise. I believe that if we have patience, we will see a brand that starts to show its soul and why fitness people should be a part of it. The positioning is not known by many [yet], but over the next couple of years, as we do a better job of telling the story, there’s a bright future for Reebok.

You’ve been meeting with retailers over the summer. What are they telling you?
MK: They want us to be strong. They want us to be a growing-market-share brand in their stores. They believe in the power of the global brand Adidas that is the dominant soccer leader in the world, but let’s see if we can get other categories to have the same type of momentum. It has been fun, because although I have wonderful relationships with golf retailers, I battled those buzzards for so many years. But so far, I have met with all the big guys and it’s been incredible, and I can’t wait to get this thing up and running in a different way in 2015.