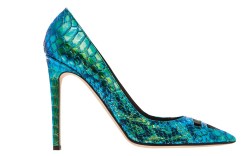 NEW YORK — The Fred Segal logo is going global, and its first stop is at the SLS Hotel and Casino in Las Vegas this week.

Design and media firm Sandow purchased the rights to the Los Angeles-based retailer in 2012, and an initial licensing agreement has transformed into something much bigger.

“Fred Segal was a pioneer of fashion,” said Adam Sandow, chairman and CEO of Sandow. “He developed new concepts for retail and was an incubator of new ideas in dining, exercise and things that would filter from California to the rest of the world. We want to take the motivations of Fred and create an environment that is more than shopping. Nothing we can do with Fred Segal can be ordinary.”

In the agreement, the Segal family retains ownership of the Beverly Hills and Santa Monica stores and licenses the name from Sandow. Dallas-based firm Gregory’s currently owns Fred Segal Feet on Melrose Avenue in LA.

Meanwhile, the execs behind Sandow opened a flagship at the Tom Bradley International Terminal at Los Angeles Airport in the fall of 2013. They are finalizing plans for a lifestyle center project in Tokyo, set to open next spring with partner Mark Styler.

Blum’s first project as CEO was to help develop the concept for the Fred Segal Collective at the SLS Hotel Las Vegas. The resort and casino designed by architect Philippe Starck opens Saturday and includes 1,600 guest rooms and more than 10,000 square feet of retail space, with six Fred Segal-branded boutiques integrated throughout the space.

Each of the stores represents one category: womenswear, menswear, gifts, jeans, jewelry and footwear.

According to Blum, the project was appealing because of the layout of the hotel, allowing for the unique experiential stores the retailer is aiming to create.

“You bump into retail stores as you go through your day. People will use the boutiques to take a bit of a break from the active nature of the property. The SLS is interesting because it mixes the pool, casino, club and retail atmosphere in an integrated way,” he explained. The CEO added that the Vegas location will also draw consumers from LA, who already are familiar with the retailer and often vacation to the city.

In terms of brand mix, Blum is banking on an edgy blend of designers to help it stand out in a highly competitive Vegas market. He said the goal for each of the new Fred Segal lifestyle centers was to curate brands and introduce new ones to each market. Top names at the new collective included Alexandre Birman, Ivy Kirzhner, Aquazzura, Alejandro Ingelmo, 10 Crosby Derek Lam, Diane Von Furstenberg and Jerome Rousseau.

“As a Los Angeles-based label, I have a special connection with them as a retailer, so it’s exciting to see them venture into other locations,” said Rousseau, who will sell six fall ’14 styles at the Fred Segal Collective. “Fred Segal is giving Vegas a bit of the fresh air it needed.”

Alexandre Birman is making his Fred Segal debut at SLS Hotel. “Fred Segal is playful, thoughtful and ever-changing, something that sets it apart from other department stores. The atmosphere is unique,” the designer said.

Looking ahead, Blum said Fred Segal will seek to invest in global lifestyle centers that blend digital and retail innovation under brick-and-mortar.

“We have interest from developers globally, but the challenge is to pick the right projects. We don’t want to be everywhere. We only want to be in locations where we can make a difference,” Blum explained.

In the Tokyo development set to open in 2015, Fred Segal is in talks with a health spa to develop a wellness concept and will have a beauty and fragrance bar called Blend. The company is also planning a new culinary farm-to-table concept for the store.

“Even as we do lifestyle centers, we’ll always have other owners and partners mixed in with what we do. We will bring in the best people to do it with us because you can’t do everything well yourself — it’s not possible,” Blum said.

On the product front, the company aims to strike high-profile collaborations as another point of differentiation. For example, it plans to partner with Kravitz Design, owned by Lenny Kravitz, on a clothing and accessories collection that launches next year. (Kravitz is represented by Sandow company Culture + Commerce.)

Overall, Blum said he is optimistic about the future of the Fred Segal name, thanks to its unique approach.

“There is an irony that we are building brick-and-mortar stores when everyone is talking about closing them,” said Blum. “We’re not opening [in a normal way]. We’re developing a new concept, so that is why I feel excited and comfortable with it.”