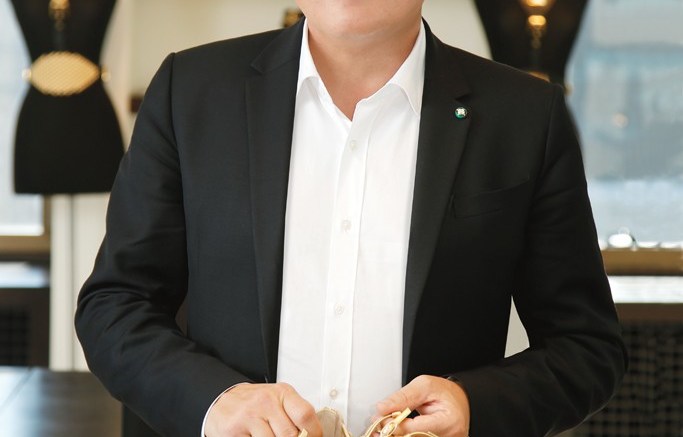 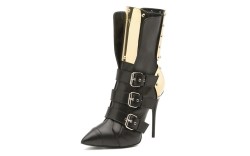 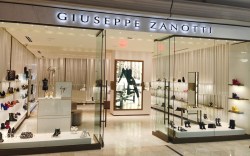 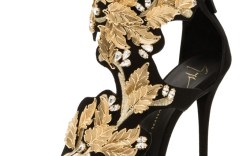 On a recent spring morning, Giuseppe Zanotti sat down at a table in his New York showroom and began to sketch miniature drawings on a blank piece of paper.

The designer, speaking to Footwear News about his 20th anniversary, illustrated the answer to nearly every question.

He traced a stiletto, then a sneaker, bag and cuff bracelet as he described the evolution of his namesake brand.

He drew a DJ booth while he reminisced about his former profession and talked about a deep passion for music.

Zanotti even doodled a logo for an imaginary collection based on midtown New York, home to his Big Apple digs and so many of his top retail accounts. (It’s also where he first debuted his line at The Plaza Hotel.)

Soon, the designer had filled the paper with an abundance of images — memories, inspirations, new ideas.

But the designer still views the venture as an “experiment.” “You’re not God, so you can’t know exactly what will happen. This work is full of problems and risks,” he said. “But you have to trust your instincts. You put your love into it and do your best.”

His instincts have helped him tap into a variety of opportunities, most notably in the burgeoning men’s business and in booming markets such as Asia. Global retail expansion is also high on the agenda; by year-end, he expects to have about 100 stores around the world.

Zanotti got another boost when LVMH-backed investment funds L Capital Management and L Capital Asia recently took a 30 percent stake in his company. “[Their involvement] will allow us to have more structure, reinforce our penetration in the international markets and enable us to keep growing,” said Zanotti, whose Italian factories produce about 450,000 pairs of shoes annually, mostly in his hometown of San Mauro Pascoli.

His production prowess has been a key factor in that success, according to major retailers. “Giuseppe is extremely strategic. He has built his infrastructure at the same pace he developed his collection,” said Elizabeth Kanfer, senior fashion director of accessories at Saks Fifth Avenue.

Kanfer said she always is impressed by how Zanotti incorporates his passions — music, travel, wine, people — into his work.

Indeed, partnerships with Kanye West and other musicians have helped the designer garner buzz, and Zanotti said he meets constantly with artists of all kinds.

“All my collaborations evolve organically; they’re not premeditated. Every artist is different. You can learn something from each one,” he observed, noting that he recently met the rapper Cardi and was introduced to Will.i.a.m in London.

Zanotti’s cultural connections are beneficial in a variety of ways, said Peter Harris, president of Hong Kong-based Pedder Group. “Giuseppe has a very prolific approach to design, which expresses itself in terms of how he explores and develops a collection,” he said.

Harris noted that in addition to furthering his presence in major capitals such as Shanghai and Beijing, Zanotti is making a name for himself in secondary Chinese cities like Chengdu, home to Lane Crawford’s newest store.

Tracy Margolies, SVP and GMM of footwear, handbags, contemporary 5F and beauty for Bergdorf Goodman, said Zanotti’s success is due in large part to his unwavering vision.

“He always has a strong point of view and stays true to his brand,” she said.”Giuseppe creates shoes for women of all lifestyles, which makes for endless future opportunities.”

Now as he plots the future, Zanotti, 57, said he also is pondering the past.

Would he have done anything differently? “Maybe changed professions,” he quipped. “You lose part of your life working 12, 13 hours a day and every weekend. It’s better now, but at the beginning, it was so hard because I had to do everything myself.

“But my heart is in fashion,” he concluded. “I’m a better soldier after 20 years.”

What is the significance of reaching the 20-year milestone?
GZ: I’m so young. [Laughs] For my first 13 years in this profession, I was a consultant in shoes. It was important for me to understand what I wanted to do with my life. When I started my own brand, the idea was for the company to grow, but not so fast. Each season, I’ve grown 10 or 20 percent, sometimes 30 percent. It was important to [expand] our level of expertise at the same time. When you open more stores and sell to more department stores and locations, you need to have more production capacity. You need to invest time to learn, teach and create. Now, we produce ladies’ shoes, men’s shoes, sneakers, belts, jewelry. There are few companies in Italy that have this kind of operation.

How has your life changed since you launched the company?
GZ: We launched the line at The Plaza Hotel 20 years ago without any money. We have money now and we can extend the business and open more stores. But every season, you still have to restart from zero. You need to have the same amount of passion.

How has the industry changed since that time?
GZ: The schedule is very busy. I was at my office in Milan yesterday, and I took the late flight here. I’ll be here for two days and go back to Milan and then to Tokyo for a few days. But then I have to go home to finish the collection; it’s very big now. Pre-collections are 65 percent of the season. Five years ago, they were 20 percent. The market asks us to anticipate the season. They want to have shoes merchandised in the stores earlier so they have more time to display them. I also show the men’s collection in June. So the deadline is May 22. Everything has to be done.

You’ve always been an ardent supporter of made-in-Italy. Why is that so important to you?
GZ: In Italy, it’s normal for companies to produce outside the country now. Perhaps they can [achieve] better margins that way. That’s one opinion. I’m more romantic. I want to preserve Italian production because I learned my profession from people here. It’s been a difficult time, but we need everyone to feel very positive about the future [and take pride] in the Italian tradition, our creativity and manufacturing. We need to look forward and rebuild.

Is it difficult to find skilled workers?
GZ: Of course. But if you have patience, you can build know-how. We have fewer locals who want to learn, but we have more people from other parts of the world who are coming to Italy. We have about 40 young, non-Italian workers who love to learn and need to work. We have a little line of production that we use to teach our Giuseppe DNA. Shoes are very complicated. For me, they need to have strong silhouettes, good lasts, heels, stability, proportion and excellent materials.

Your sneaker business has grown rapidly. Why has that category been such a success?
GZ: Sneakers were more limited at the beginning. They are a lifestyle now. People from all over the world ask me to customize their sneakers. We have the ability to do that since we produce everything in-house. My take is unique: We translate our glam DNA into the product. The same girls who have my stilettos also wear my flat sneakers. This was a surprise to me.

Do you think men and women are coming closer together in their fashion preferences?
GZ: Fashion is more unisex now, more uniform. If something is good, it’s good. A fashion element in a high stiletto can move into a flat sandal for men. The zipper we used on our booties for fall is also used in the men’s collection. After three years, we have a great business in men’s, especially in Asia.

Do you envision having a full lifestyle collection down the road?
GZ: Ready-to-wear is not my mission. It’s another story. I’m more leather-to-wear. I’d like to have some leather shorts or pants in my collection, but I prefer to concentrate on the accessories: the shoes, the jewels, the bags.

Which markets excite you the most?
GZ: Asia is so strong for us. It is a market that’s performing better and better. The people are so cool; they’re obsessed with music and fashion. I enjoy going to the big cities like Shanghai and Beijing, but also to other places like Guangdong, Guangzhou, Macau and Shenzen.

Would you like your two sons to get involved in the business?
GZ: If you love your children, you don’t suggest the same business. I don’t want to push them in any direction. They are free to do what they want. For me, this has been an incredible and beautiful experience, but very hard. You’re married to this profession and you can’t live a normal life.

Where will you be 20 years from now?
GZ: I don’t know if I will be as passionate as I am now, but we still have a lot of things to do, a lot of opportunities.

How to make it in the shoe business:
“[You can’t] go to university for one year and say you’re a shoe designer. It’s a more difficult [profession] than being a fashion designer. You need to spend time working in production, understanding how to work with leather, learning about fit, lasts, heels. You have to be passionate. This is not a job you can do on a whim.”

Being knocked off:
“There are fake Giuseppe Zanotti shoes online that sell for $39.99. I’m upset, but this is part of life. China copies us, but it’s also one of the most important markets in the world for us. Most of the time, people copy me after the shoes have been out there for a season. This is normal. It can be more dangerous when a huge designer [knocks you off] within the same season.”

The intense design cycle:
“When I need to start a new collection, it’s like, oh, my god, I just finished the last one yesterday. For 40 days, I suffer while I’m trying to figure out the new direction.”

Celebrities with style:
“For me, Jared Leto is a star. He’s a musician, an actor and he has this hipster look that’s amazing. He’s never boring. Miley Cyrus has a great sense of style. In terms of voice, Beyoncé is my favorite.”

Kanye West’s fashion aspirations:
“Kanye is an artist, a pure one. He’s an expert in fashion, but it’s not his priority. It’s exercise for him, in the same way music or cooking is my exercise. Of course he has talent, but his priority is art.”