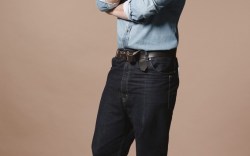 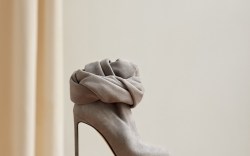 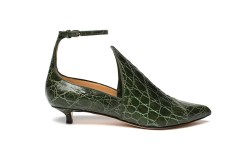 From his tucked-away atelier and storefront on the Rue de Valois in Paris, Francesco Russo has quietly staged a return to what he loves most: exclusive footwear of the highest order, no matter the cost or time consumed.

“I spent three months just working on making the shoes extremely comfortable. I believe as soon as a woman puts on high heels, she becomes a sort of butterfly,” said the insect-tattooed designer. “I’m fascinated by metamorphosis in life. If [the heels] are comfortable, she becomes something even more beautiful, light and feminine.”

Indeed, Russo, 39, has been behind some of footwear’s most transformative styles of late, as the former creative director of Sergio Rossi and lead shoe designer at YSL (now Saint Laurent) during Tom Ford and Stefano Pilati’s tenures. YSL’s Cherry sandals and Tribute platforms and Rossi’s Mermaid stilettos were all Russo creations.

Since launching his solo venture independently in 2013 from his base in Switzerland, the Puglia, Italy-born designer has cultivated an ultra-luxe vision for his eponymous collection.

“I’m very surprised to find that the woman who buys my shoes is not always who I am thinking,” he admitted. “Overall, it’s the sexiness [of my work] that she’s looking for.” Currently, that translates to a sophisticated color palette, single-sole constructions, sharp angles and a steep pitch in luxury skins such as crocodile. “What makes me excited is a 105-millimeter stiletto. That’s my ideal,” he notes, though his experiments with lower heels are also striking.

Russo is determined to not compromise on his designs, even if that means limiting distribution. For spring ’14, the collection is only available at Bergdorf Goodman and his own boutique. He will roll out to 10 points of sale worldwide for fall and is in the process of visiting each to meet with clients privately.

“We were very excited to have the opportunity to launch the shoes exclusively,” said Joshua Schulman, president of Bergdorf Goodman, who previously worked with the designer when both were at YSL. (For more on Schulman, see page 14.)

Between embarking on a world tour and managing a burgeoning consulting business, which includes overseeing footwear at Christian Dior, Russo sat down for an intimate one-on-one with Footwear News.

What is your approach to designing your namesake collection?
FR: It’s a personal journey. I continually look at how a woman is dressed and how she lives. I am trying to bring back fashion in an exclusive way. I always said if I ever did a collection, it wouldn’t be enough to just design, but I would need to have a store [to function] as a sort of atelier. I wanted to do something that goes back to the roots of shoemaking and craftsmanship, using only the best materials and embracing a luxury that has been lost because of today’s big numbers and speed of production. It was at the end of my period with Sergio Rossi that this desire became stronger and stronger, so I started to look in Paris for a store space. I knew exactly where I wanted to be and what sort of place I wanted. I was so lucky to find it. [Outside of that], the line is at Bergdorf and soon nine other different retailers around the world — for example, Neiman Marcus in Miami and Los Angeles, Beymen in Istanbul and Harrods in London. I don’t want more than three [stores] in one country because I want to keep the project very special. I don’t have the urgency to sell to just any store. I want to grow organically.

Were you worried about making the leap from luxury conglomerate to independent venture?
FR: I’m more scared now. When you’re starting, you have adrenaline and don’t think about what’s next. It’s something I have always been dreaming about, so I was focused on making it happen. At the beginning, it was difficult. All of a sudden, I found myself alone. I was used to designing 20 prototypes, and two days later they were on the table. Now, I design five and one month later they are still not there. I have to be the one calling or visiting the factories. When you work for a big company, everything is easy in the sense that you work a lot, but you are supported by a team. You have money to spend to develop your brand. You’re not alone. Even creatively, you’re supported by people and means. There were moments when I almost dropped everything and didn’t keep on going, but then I got strength from my friends and family.

What is it like to see your YSL and Sergio Rossi designs continue as major success stories?
FR: These are designs I’m very proud of because they pushed the limit — [for example], the cage boots from YSL or the shoes for Sergio Rossi with the spiral heel. I keep those special pieces. Those were more than shoes, they were technological challenges. I’m in the process of getting everything together and archived in one place. But I’m not really attached to what I’ve done. I prefer to go forward.

Your work at Christian Dior has been at the center of the runway sneaker revival. What is your take on this period in fashion?
FR: There is a big trend going back to sports right now, but it’s up to the customer to find her own style. Whatever fashion does, it’s only a suggestion. It’s no longer an obligation. That’s not what I do through my work.

Do you desire to grow into other categories?
FR: No, because what I am good at is shoes. I am a cobbler. I spend my time in the factory. It could look limiting, but it doesn’t mean those are my only interests. Theater, art, reading, friends and travel all play into my work. That’s the way it should be. My shoes are far better today than they were 20 years ago, and that’s because of the experience. You can never stop learning and trying to find new ways of doing things.

Who are your career mentors?
FR: I have many. Tom Ford is one of them. He has this fascination with high heels, but pays attention to the way a woman walks and how [the shoe] fits. Tom totally loves women, and you can tell that through what he does. Stefano Pilati was another [mentor]. One of the challenges of working with him was that you couldn’t have any limits. This is something that anyone in design should keep in mind — if you don’t push that limit every time, you are not going to do anything interesting. In the whole world of shoe design, I most admire Manolo Blahnik. This man is the king of shoes. I’ve never met him, but he’s someone I often think of because he’s been able to impose a style that goes beyond season and trend. Manolo is Manolo. The way he shapes the heel and the last — he’s a master and someone I respect quite a lot. He always stays true to himself. I want to do the same.