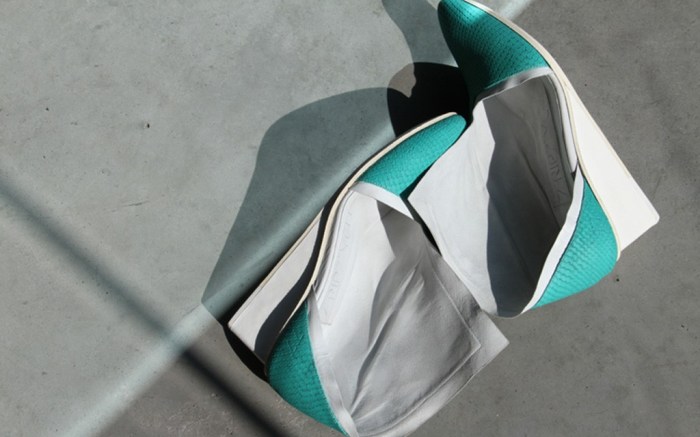 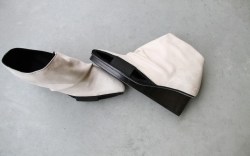 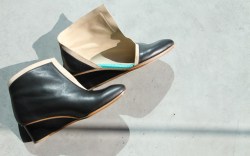 A professional architect and professor at Parsons The New School for Design, Ursomarzo has crafted a selection of six boots and booties for spring ’15. Handcrafted in Italy of soft leathers and suedes, the styles combine disparate, architectural elements, with sharp angles on the wedge heels and cutouts, and smooth curves on the loose boot shafts and gathered uppers.

While the jump from designing buildings to designing footwear seems dramatic, New York-based Ursomarzo said it was a natural and easy. “I’ve always had an interest in the relationship between objects and the body,” she said. “If you’re a practicing architect, those concerns carry through. For me, it was just a change of scale.”

The process of developing the line was more challenging, though. Ursomarzo spent 13 months searching for a factory that could execute her vision. “Because there’s no precedent for my shoes, structurally, there were a lot of things that had to be resolved, and every part of the shoe was developed custom,” she said. “Nothing is modified and everything is handmade.”

The designer said the goal was to create truly season-less shoes. That meant producing a high-quality product that defies familiar trends. She also emphasized comfort and wearability for the line by placing the boots on low wedges.

But Ursomarzo acknowledged her aesthetic is unusual and comes with risks. “There’s a lot of the same on the market already, and I wasn’t interested in doing that,” she said. “Maybe it would be smarter and more lucrative and more stable to do things other ways, but that’s not interesting to me. In my opinion, that’s a waste of time.”

Triptych shoes will retail for $850 to $1,300, and distribution is being targeted to fashion boutiques.

In the meantime, individuals can preorder pairs at cost through a Kickstarter campaign, running through Oct. 3.