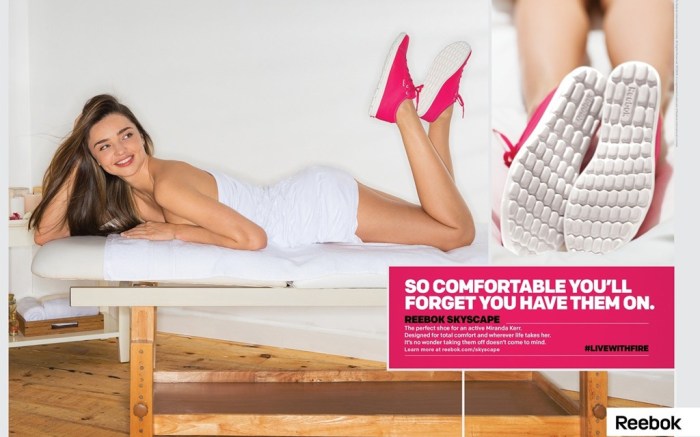 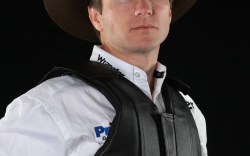 Reebok’s Sky-high Ambition
Reebok launched a campaign with supermodel Miranda Kerr on Tuesday to promote Skyscape, its new active-and-casual women’s shoe. The spring advertising campaign rollout is planned for TV, digital and print outlets. One TV spot shows Kerr getting ready for the day and ends with a close-up of pink Skyscape shoes. “I’m on the move all day, so it’s important to have a pair of shoes that balance comfort, style and practicality,” Kerr said in a statement. “My Skyscape shoes are a wardrobe staple that come with me everywhere I go — they’re the perfect in-between shoe to wear to work, running errands or to the gym, and because they’re lightweight and compact, they’re also great for travel.” The Skyscape collection is available beginning April 1 at Shoe Carnival, Rack Room, Kohl’s, Shoe Show and on Reebok’s website. The Skyscape campaign also is part of Reebok’s ongoing “Live With Fire” initiative, which Twitter users can follow via the hashtag #livewithfire.

Cowboy Up
Rocky is teaming up with two-time Professional Bull Riding World Champion Justin McBride. McBride will wear Rocky boots while competing in the American rodeo competition on March 2 at AT&T Stadium in Arlington, Texas. The competition entails the world’s best cowboys and cowgirls facing off in seven events for a $2 million prize. “We are thrilled to have Justin McBride representing Rocky at The American,” Kristin Dille, brand manager for Rocky’s Western division, said in a statement. “Rocky makes some of the toughest and most technology-driven boots in Western footwear, so partnering with a champion like Justin McBride is a great fit.” In addition to wearing the boots at The American, he’ll also sport the Rocky logo at rodeos, major events and during public appearances. In turn, Rocky will incorporate McBride in all upcoming marketing materials. “You’ve got to be tough to be a bull rider and you’ve got to have tough gear to accomplish that,” McBride said. “Whether it’s in the arena or out in the field hunting, from the apparel to the boots, head to toe I’m covered and ready for any situation with Rocky.”

Put Me in Coach
Brooks Sports will honor the year’s best high-school coach for the fourth time. The 2014 Brooks Inspiring Coaches program started this week, as nominations for the Inspiring Coach of the Year Award began Wednesday. “We want to wave the banner of these incredible coaches and reward them and their programs for the hours of dedication to our sport,” said Brooks’ team brand manager, Steve DeKoker. The winner receives $10,000 in Brooks performance running gear and $2,500 in cash to help pay for team expenses. Finalists for the award receive $5,000 in gear and $500 cash. Brooks’ internal voting committee will select 25 finalists for the award in June, and once finalists are announced, Facebook users and the running community will vote for their top picks. A winner will be announced in August.