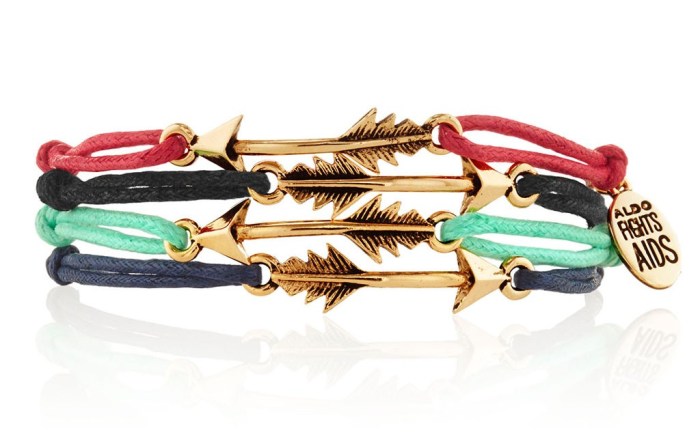 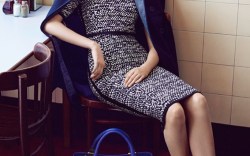 Aldo Ups AIDS Fight
Aldo has launched a new campaign in support of AIDS awareness called “Friends Fight.” As part of the effort, the company collaborated with jewelry designer Waris Ahluwalia, CEO of Waris Loves You and House of Waris, to create a collection of unisex friendship bracelets in red, black, navy and mint that will sell for $5 a piece at Aldoshoes.com and in Aldo stores globally starting Feb. 1. Aldo founder and Executive Chairman Aldo Bensadoun said the bracelets are an important symbol. “They represent friendship and solidarity,” he said in a statement. “It’s an invitation to join together in the fight against AIDS.” All proceeds will be donated to Partners in Health, a nonprofit organization that provides medical treatment, housing, water, food and support to thousands living with HIV.

Adidas Relaunches With Stan
Tennis legend Stan Smith’s iconic Adidas shoe is getting an upgrade. Through today, fans can tweet selfies with the hashtag #stansmith for the opportunity to have their face drawn on the shoe’s tongue, as Smith did himself. He has endorsed the model for the past 40 years.

Saucony Runs Strong
With the 30th annual Sundance Film Festival underway, Saucony is hoping to capitalize on the creative energy of Park City, Utah. On Sunday, in collaboration with Runner’s World magazine, the brand will present a private screening of “Finding Strong,” a film by director Brian Vernor, at an invitation-only conference of various creative and business leaders. “Finding Strong” premiered in November at the New York City Marathon. The 22-minute documentary profiles a variety of runners, ranging from National Guardsmen in Japan to physically challenged athletes in New York. “This film brings our brand mission — to empower the human spirit through running — clearly to life in a compelling and beautiful way,” Chris Lindner, chief marketing officer and SVP of commerce for Saucony, said in a statement. “The Collective platform, with its community of social entrepreneurs and change makers, is an amazing opportunity to celebrate both the power of the human spirit and the positive social impact a community can make.”

L.K. Bennett’s New Star
British luxury brand L.K. Bennett has tapped model Sam Rollinson as the face of its spring ’14 campaign. According a statement announcing the campaign, the idea of “a London rose” inspired the spring collection, which features slightly exaggerated silhouettes of dark navy and cream with pastel blue and rose highlights. “We are so excited to be working with Sam Rollinson on our spring and summer campaign,” said L.K. Bennett CEO Didier Drouet. “A confident and refined beauty, she brings an energy that mirrors the freshness and modernity of the collections.” The campaign was shot by Scott Trindle.

Cavallari Goes “Under the Gunn”
While they’re not being judged, Kristin Cavallari’s shoe line with Chinese Laundry will have a role in Lifetime’s new fashion-competition series “Under the Gunn,” developed by “Project Runway” judge Tim Gunn. The brand teamed up with retailer Francesca’s, which is sponsoring the accessories wall on the show.