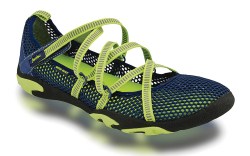 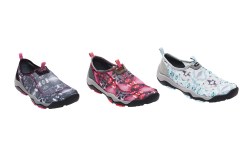 This year, the label is introducing a series of technical products and launching e-commerce, both contributing to double-digit growth for the fourth year in a row.

Jambu, a division of New York-based Vida Shoes International Inc., debuted in 2010 as a higher-end offshoot of the company’s J-41 line of hybrid outdoor-sport looks.

According to GM David Jonah, Jambu’s elevated product assortment, retailing for $89 to $329, has garnered shelf space in a variety of accounts, from better independents and outdoor retailers to department stores and e-tailers. Meanwhile J-41, which retails for $79 to $99, remains focused on distribution in chains such as DSW.

And the brand has introduced a number of performance pieces. This fall marks the debut of a men’s and women’s boot with retractable carbide steel spikes for traction on snow and ice, and the HyperGrip outsole, which offers enhanced grip on wet and icy terrains.

On tap for spring ’15 is the Terra Marine collection, a trail-and-water series with built-in drainage ports in the outsole, and Air Vent 360˚, a series featuring perforated insoles for maximum airflow.

“In our view, innovation can be very simple and not technical at all, as represented in our Eco Design concept,” said Jonah. “We also think it can represent something more progressive for consumers who are free thinkers and early adopters.”

To acquaint consumers with the new line, Jambu will run ads this fall in Backpacker, Field & Stream and Ski magazines. It also will launch e-commerce this month as part of its revamped website.

Moving into 2015, the brand is implementing a broad digital advertising campaign and will continue its partnership with American Forests’ Global ReLeaf program to aid in the preservation and restoration of forests devastated by wildfires and natural disasters.

Those initiatives are fitting. Jambu takes its name from the Southeast Asian fruit that provides sustenance to rain-forest animals. “It’s who we are as a brand,” Jonah said. “The Jambu consumer lives in the moment and engages life with gusto, whether strolling the neighborhood, climbing a mountain or navigating the city. We offer innovative ways to solve the outdoor-adventure consumers’ needs.”

The label has been a strong performer at Waltham, Mass.-based Planetshoes.com, according to Brooks Maitland, director of merchandising for Planet Inc. “What’s nice for the average customer is the fact the collection blends sport and feminine elements very well,” Maitland said, noting year-to-date sales as of July were up roughly 18 percent over 2013. “When we added Jambu five years ago, they didn’t have a dressy segment; it was more sport-casual. [Today], we do well with both categories.”

In addition to its women’s collection, Jambu launched a kids’ line in 2012 and added a concise men’s offering in 2013. “We were only satisfying half the population,” Jonah said. “Once we developed a strong women’s presence, it was important to become a full lifestyle line with men’s and children’s.”

While Jambu aims to establish itself as a player in the performance market, retailers such as Sole Desire in Santa Rosa, Calif., carry the brand for its everyday casual vibe, as well as its comfort aspects such as memory foam footbeds and All Terra Traction outsoles made of partially recycled rubber.

According to Sole Desire President David Astobiza, Jambu takes a more fashionable approach to the outdoor niche. “They were the first [brand] to come out with a sporty wedge in vegetable-tanned metallic leather,” Astobiza said. “They were the feminine genre.”

Jared Friday, outdoor footwear buyer for Zappos.com, touted Jambu for seamlessly marrying function with fashion. “What attracted me to the line is the fact Jambu doesn’t take itself too seriously as a technical outdoor brand,” he said. “Instead, it focuses on the everyday customers who still identify themselves as an outdoor person — someone who focuses on comfort and style with some outdoor roots.”

At Holliday’s European Walking Store in Houston, co-owner Nadia Holliday buys the line for its pure fashion appeal. “Customers love the wedges,” she said. “Once we sold them [their first] pair, they came back for more.” Holliday added that women over 40 are the target audience for the wedges, but the more-casual flats resonate with all ages.

For Jambu, the goal now is to balance that fashion image with performance-driven goods. “It’s always tough to grow outside what people think is your comfort zone,” Jonah said. “We look to adopt those consumers who shop performance products but are more diverse [by nature]. The real challenge has been convincing consumers they can be fashionable, outdoorsy and comfortable.”