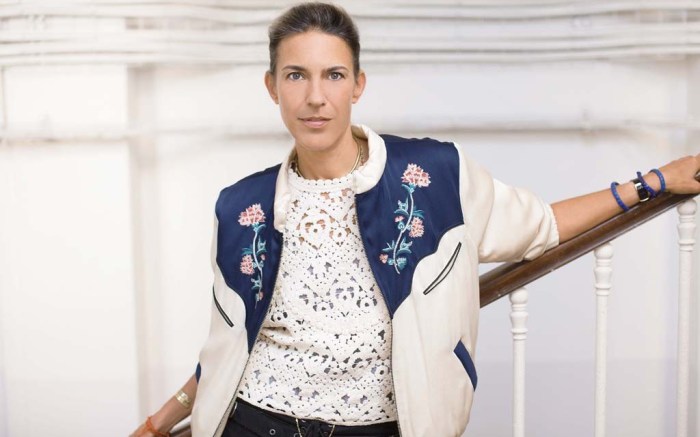 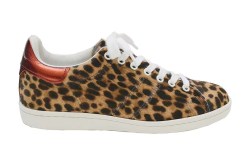 The fashion world has become a more comfortable place in the past several seasons, thanks to the rise of understated and athletic-inspired shoe silhouettes. But fusing fashion and functionality is nothing new for Isabel Marant.

“We are all looking for comfort most of all,” said the French designer, who took time out from preparing her Paris Fashion Week show, slated for Feb. 28, to speak with Footwear News.

Marant has built her 20-year-old brand on wearability and an aesthetic she describes as “a little casual but quite chic at the same time,” especially when it comes to footwear. In addition to her blockbuster sneaker wedges — which hit retail in 2012 and became a much-sought-after, often-sold-out shoe — the designer’s footwear mix includes single-sole boots, booties, slippers, ballet flats and pumps, all with deliberate, minimalist detailing.

“Being a woman, I understand what shoes can bring to a silhouette,” Marant said. “I have a very personal approach that is always quite feminine but also has a strong attitude. It’s a bit boyish, and that really relates to my style.”

Although the designer strives to maintain a degree of exclusivity, she also understands the importance of global expansion. On the heels of her sold-out fall ’13 apparel and accessories collaboration with H&M, Marant celebrated the opening of her first London flagship in December, bringing the worldwide tally to 14 locations in seven countries. Two additional boutiques are slated to bow next month, in Thailand and China. “We are choosing [carefully] with whom we are working, and we are trying to have very selective distribution,” the designer noted. “It’s everywhere because you need to be everywhere, but not in a too-massive way.”

Below, Marant shares with FN how her line is moving beyond the sneaker wedge and why she prefers to keep a low profile.

Were you surprised by the intense popularity of the sneaker wedge?
IM: At this point, yes. When I created those sneakers, I was really into, “How can I have something super-comfortable but still have the height.” I remembered putting cork wedges into my sneakers to look taller when I was a child, so I wanted to push that. Height always brings more confidence. I worked to achieve a balanced look, which is not easy with [the sneaker wedge]. I worked on [the design] for more than nine months before launching, and when it was finished I looked at it and said, “Oh, that’s going to be a hit for sure.” But I wouldn’t have thought [the style would still be in demand today]. They still have something special, even though there are a lot of copies, and the bad copies are super-ugly. People want [the original]. I’m still selling a lot.

Do you wear the sneaker wedge yourself?
IM: I don’t wear them as often as I [used to] because I see too [many bad copies] in the street. I’m not saying mine are the most beautiful shoes, but they have a certain [style]. And on the weekends, I’m so happy to have them because I feel so good in them. I don’t want to throw them out.

Where are you taking your footwear collections for pre-fall and fall ’14?
IM: For my Étoile [diffusion] line, I did a lot of furry moccasins that were inspired by comfort — that super-plain shoe with fur inside. You can wear them barefoot even in the winter. People want to have something that’s cozy and comfortable, and with the Étoile line, I can go more casual. For Isabel Marant, I worked on a lot of boots that have a quite heavy heel that is very comfortable.

What has been inspiring you lately?
IM: It’s always little things. It can be a color or a way of behaving. I’m into a strong attitude with a casual look, but also chic at the same time. It’s giving attitude but keeping in mind something very comfortable. I believe we are all looking for comfort most of all.

Comfort is now a buzz word in fashion, but it always has been paramount in your collections. Why is wearability so important to you?
IM: When I am dressing in the morning, I go first toward things that I feel well in and that I can spend the whole day in. I don’t want to put on a pair of shoes that break my feet or a jacket I don’t feel comfortable in. Sometimes you want to dress up and you are ready to suffer a bit, but in the end, it’s something you will give away. The most comfortable things are the things you will always wear and that you are never fed up with.

Are there any new shoe categories you’d like to explore?
IM: Tons of things. Sometimes I wish I could be only a shoe designer because I love doing it and I have such a [short] time to do it. I’m very frustrated about that part.

You covered some new terrain with your H&M collaboration. What attracted you to that partnership?
IM: I’m [often] requested to do this kind of collaboration, but I don’t want to be everywhere all the time. H&M was something special. There are not [many] collaborations that offer the opportunity to reach people on this level. It was a good opportunity for me, after almost 20 years of my label, to do a kind of overview of my style and [reach] people who love my clothes but can’t afford them or [find them], and also to bring the global image of Isabel Marant to a wider audience.

You created some men’s looks as part of the H&M line. Would you ever add that category to your main collection?
IM: That’s another thing I would love to do. I had a great time doing it, but I’m so invested in what I’m doing, and I’m already working so much on the three lines plus the shoes, jewelry and other accessories, I can’t afford to do another collection. I’m not the kind of designer who just gets another designer to do the job. I don’t think I will ever do men’s, unfortunately.

How has globalization affected the way your French and American customers shop?
IM: There is almost no difference between the big capital cities. I check the records of the shops often, and what we sell in Paris is what we sell in New York. Maybe there will be a little difference between Paris and Los Angeles, or even New York and Los Angeles, but it’s more about the weather. There was a difference maybe 10 years ago. I remember selling to big department stores, and they would go more for the [professional] looks in my collection, which is not the case anymore.

How often do you visit your own boutiques, and do you interact with customers?
IM: In Paris, I go every 15 days. The excuse is that I always want to bring a present to a friend, but I quite like to pass through the shop from time to time. When I was not so known, it was much easier for me to stay in the shop, and I really loved it. I loved to see women trying on things and sometimes I would even give them advice. It was a pleasure for me, but now it is more complicated because people want to take pictures of me and it goes up on the Internet. I don’t want to expose myself too much. I’m quite shy.