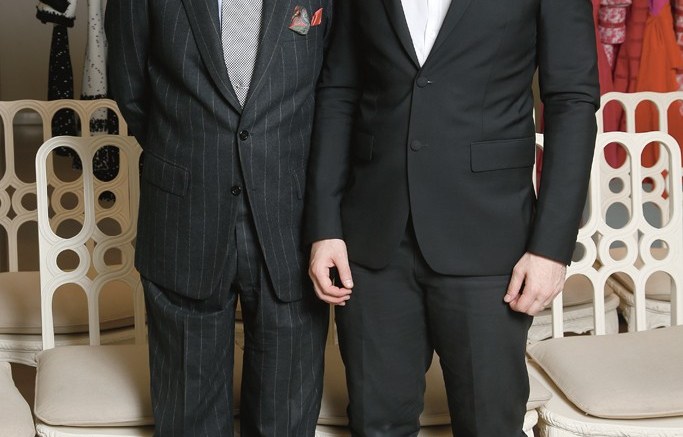 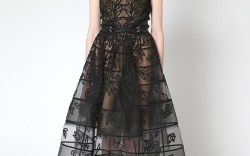 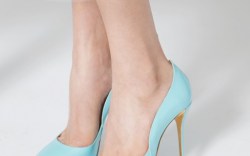 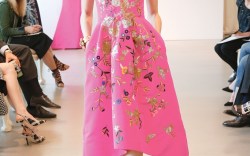 “We’ve been emphasizing shoes for a while,” said Alex Bolen, company CEO and director. “But to be honest, we’ve not been as successful as we would like. When I look back, we’ve tried to be too many things to too many people.”

Enter Chicago-born designer Daniel Lawler, 35, de la Renta’s new VP of footwear. He joined the company in March after stints at Balmain and Christian Dior, where he worked under John Galliano.

“John is a friend of ours,” Bolen said of the famed designer, who did a three-week stint at the house in 2013. “I discuss a lot with him, such as the need to improve our shoe business. He said, ‘You should talk to Daniel,’ and we did.”

Lawler’s first effort for de la Renta was on display at the label’s resort ’15 presentation, held last month. And this week, retailers from Net-a-porter.com, Neiman Marcus, Saks Fifth Avenue and others will get their first glimpse of the 30-style collection, priced at $590 to $1,800.

“It’s been a whirlwind because I had to launch the collection so quickly after I started,” Lawler told Footwear News backstage at the presentation, as models slipped in and out of his selection of slingbacks, jeweled stilettos and curvy pumps.

As he was crafting the designs, Lawler said he was surprised by the firm’s collaborative approach. In fact, he often toils away alongside the brand’s namesake leader.

“It’s an open studio. We all work together, and I show Oscar everything. It’s rare because shoe [departments] are usually quite relegated,” Lawler said, adding that de la Renta is very involved in his team’s progress. “He’s very honest and great with feedback. It’s been amazing having that access to him. My favorite thing he kept reminding me of was that he needs to be able to envision everything on one of his friends. It has to be wearable, it has to be practical, but it has to be amazing. But because his name’s on it, there’s a lot of pressure.”

Luckily for Lawler, he had studied the archives when he was at Balmain, taking particular interest in de la Renta’s tenure (from 1992 to 2002), which gave him insight into the fashion icon’s distinct oeuvre.

But before his time at the Paris fashion houses, Lawler gained valuable experience working at Jimmy Choo, where his career began unexpectedly after a short stint at Cordwainers College.

“I got an internship in the PR department. I put my book of sketches on [Jimmy Choo creative director] Sandra Choi’s desk while she was on the phone and sort of ran away,” he recalled. “Later that day, she came up to me and said, ‘Who are you?’ They pulled me out of school after two weeks.”

Before he knew it, Lawler was an integral part of the team and responsible for such big-ticket designs as the Lance strappy stiletto, a red-carpet favorite. “My career just fell into place from there,” he said. “It was such a blessing. Sandra taught me everything. She was my school.”

His starting point at de la Renta was the Sabrina pointy-toe matte patent pump, a style that meshes well with the brand’s customer and a personal favorite of the designer himself. “Oscar is a big fan of the pump, so Daniel has tried to understand his desire, but bring something unique to the market,” said Bolen, who is thinking both short and long term when it comes to growth. “Look, I have goals for today, I have goals for tomorrow, but [my focus] right now is that we establish a brand identity with footwear so people know what Oscar de la Renta stands for in shoes again.”

To drive sales, the de la Renta team is banking on Lawler’s 100-millimeter heels and the Samie kitten-heel slingback, which will be offered in nine hues in both patent and crackled metallics. “They’re fun and so easy, but still quite chic. It’s not reinventing anything, but it is modern,” Lawler said. “It’s so difficult to create a pump that has a strong identity. We wanted to do a signature but not have it be a pared-down version of Manolo [Blahnik] or Christian Louboutin.”

To match the house’s aspirational elegance, Lawler also threw flights of fancy into the mix, including dramatic back-tassel mules and exotic goose-feather-trimmed stilettos, which involved considerable back-and-forth with the embroiderer. “You’re not building a footwear collection as much as you are dressing these women, so it was a different approach for me,” the shoe designer said. “Balmain was very directional and Dior is very theatrical, but still everything was distilled into a huge commercial collection.”

While Lawler admitted he has only begun to delve into the role, he thus far is pleased with the results — and his boss’s positive reaction. Indeed, de la Renta offered his full endorsement at the presentation. “Oh, I like them all. But you know, I really love the little kitten heel and then the pleated chiffon sandal — so gorgeous,” he told FN. “Freedom,” is how he described the direction he gave Lawler. “I have no question he knows what he is doing.”

Still, this is not the firm’s first attempt at bringing on a high-profile hire to revamp footwear. In 2010, Annelie Hofstrom joined de la Renta via Manolo Blahnik. (She left several months ago.)

De la Renta was seeking someone who could capture the spirit of his regal, Latin-infused designs and apply it to shoes. “Oscar has a very clear DNA and distinctive look when it comes to ready-to-wear,” noted Bolen. “We challenged Daniel to bring that to our shoe business, and he’s off to a great start.”

Lawler is aware of the competition facing the brand. After all, the luxury footwear arena is still dominated by specialists such as Blahnik, Louboutin and Choo. Still, he remains upbeat. “American [fashion] is looking for a brand like this to succeed in this product [category]. Everyone wants it to work.”