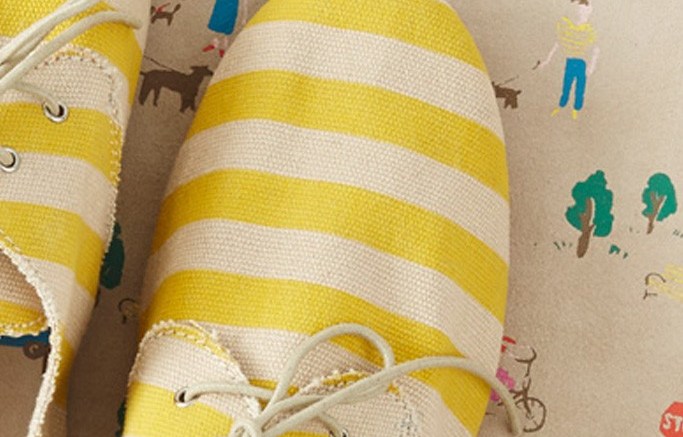 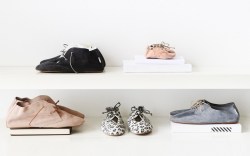 America’s looking down under for style inspiration of late.

As we reported in August’s “Aussie Invasion,” the number of footwear talents bringing their wares to the States is rapidly increasing.

Since 2010, Hobes has seen a rise in interest — and requests — for its lightweight suede shoes across the globe. For its latest fall ’14 iteration, the brand approached Brooklyn-based artist Leah Goren to capture the spirit of New York in its soles.

Here, Hobes’ founder Georgia Hobart discusses her latest project, the brand’s approach to American style and the task of creating a digital brand with international footprints.

How did the collaboration with Leah Goren come about?
We introduced a platform into the business to facilitate our partnerships, called Hobes Projects. We work with designers around the world to come up with new products and prints for our core range. When I decided to launch in the U.S. market, I immediately thought of Leah. I spent some time in [New York] at the start of this year, and we immediately hit it off and decided to work together.

Our idea was to develop a print that would bring the streets of New York right into Hobes. Leah’s design perfectly captures this with a really sweet Brooklyn streetscape. Printing such a detailed design onto fine suede isn’t that easy, so sourcing the right support for this took a little while. The idea was for the print to be used within the shoes, and designing the linen carry bag to go with this was a great way to tie the project together.

What has been the most challenging part about bringing the line to the
U.S.?
There have been many!

[The U.S. is] such a different market to Australia. Obviously the size and scale of media is a little daunting for a small brand like ours. But I must say we’ve had such an amazing response from the U.S. market so far. I think the relaxed and casual, and very simple, nature of our designs is really appealing in today’s market of back-to-basics and simplicity in style. We have learned a lot along the way and have made some lovely friends. I feel like America is ready for Hobes, and with the response we have had so far I’m really excited to see what the coming months will bring.

What’s your take on Australian vs. American style?
Australian style is very laid-back. I think this is how Australians in general are viewed by Americans: pretty easygoing, but also very hardworking. I feel like our style in Australia definitely is casual, and while styling is quite simple, there is a firm emphasis on high-quality tailoring and beautiful detail.

The strong Italian influence in Melbourne and Sydney has played a role in the evolving style of Australians. There are lots of young Australian designers that have an Italian heritage, particularly in the area of men’s bespoke tailoring, which is having a real moment in Australia right now. It has taken a while for Australian brands to be taken seriously on an international scale, but in the last few years, things have changed significantly, and it’s great to see Australian labels to be so respected and sought after.

Is social media playing a part in expanding brand awareness abroad?
Yes, of course, this is so important for us. We’ve had many bloggers contact us about our label after seeing us on Instagram, and it goes without saying social media is essential in reaching out to new audiences around the world.

What’s next for Hobes? Any hints as far as the spring collection?
We have lots of things in the pipeline! The Cotton Hobe is being redesigned and will be introduced shortly. We have a new Hobes Project in motion with a Berlin-based designer, and we’re also working on a travel capsule with one of our favorite Melbourne brands.