Granoff Opens Up About Vince Footwear 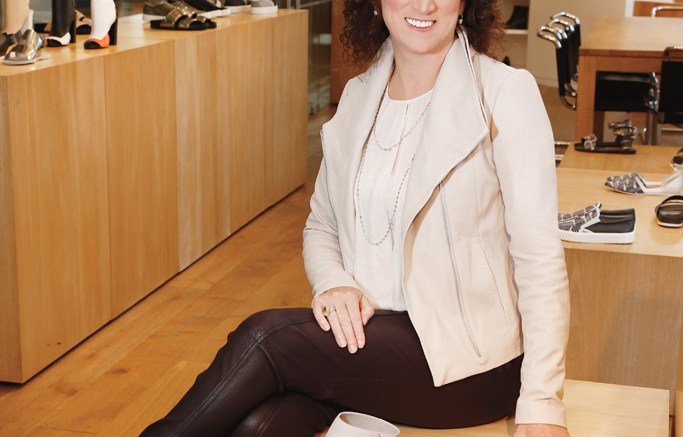 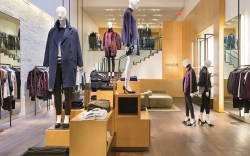 Jill Granoff, chairman and CEO of Vince Holding Corp., can often be found perusing the floors of her company’s Madison Avenue store, talking to consumers and taking the pulse of the people buying the brand.

Feedback from shoppers, including requests for new product categories, was one factor in the New York-based company’s decision to foray into men’s footwear, which hit stores last week.

The new collection features sneakers, boots and chukkas, ranging from $225 to $550, with an expanded assortment in the cards for spring ’15.

“We believe we have tremendous growth opportunities ahead as we evolve into being a real lifestyle brand, and footwear was one of the first initiatives to move us in this direction,” Granoff said.

“There are [shoe] companies that have transitioned into apparel but not a lot of apparel companies that have successfully done the opposite. We saw a white space in the market in terms of having cool, comfortable, casual and sophisticated footwear at a great price point,” she added.

Granoff, who was tapped as CEO in 2012 and took the company public last year, has a vision to evolve Vince from a primarily U.S.-based wholesale-driven women’s apparel business to a global, multichannel, dual-gender lifestyle brand. In fact, the men’s footwear line comes on the heels of the launch of women’s footwear in 2012. Next year, the firm — which produces its shoe collections under a licensing agreement with Brown Shoe Co. — will introduce handbags.

When Vince debuted its women’s shoe line in fall ’12, the brand was stocked in about 80 department and specialty stores, with about 13 styles on offer. Since then, the company has expanded its door count to more than 300, with additional growth expected to come from increasing the number of international partners.

“Since launching women’s footwear, our style count has tripled,” Granoff said. “We believe we are emerging as one of the leading footwear brands in the advanced contemporary market. Footwear ties in with the overall brand DNA.”

Rebecca Damavandi, group president of global business development for Vince, said the momentum the company has seen in its women’s footwear business is already carrying over to men’s.

“We have had a great initial read on the new line and already have a waiting list — we have opened our first freestanding men’s store down in the Meatpacking area, and people have seen the samples in store and shown lots of excitement,” she said.

Vince’s decision to work with Brown was driven by the latter’s manufacturing prowess and deep understanding of the contemporary market.

“Our partnership with Jill and her entire team has been terrific,” said Diane Sullivan, president, CEO and chairman of Brown Shoe Co. “She is always looking for new ways to build the business, and she challenges everyone on her team to do the same.”

Overall for the firm, growing the direct-to-consumer retail business globally is a key focus for Granoff.

The company — which derives 80 percent of its business from wholesale — plans to expand its retail footprint with the opening of seven or eight new stores in the U.S. in fiscal 2014. Leveraging the success of its shop-in-shop investments, it plans to open an additional 15 to 25 domestic shops over the period, including a women’s space at Bloomingdale’s 59th Street.

On the online side, Vince relaunched its website in February with a more refined look and feel, a decision that helped drive double-digit growth in e-commerce sales in the first quarter.

In addition to a new “Shop the Look” function, the site features a neighborhood section with tips and advice on things to do near different retail locations. The company plans to spotlight its Japan store in the section in coming months to celebrate its one-year anniversary.

“We will likely see accelerated growth in the direct-to-consumer segment — one, because it is off a smaller base; and two, because we believe we can open up more stores as we also [grow] our e-commerce platform, which today is our fastest-growing channel,” Granoff said.

While Vince operates in 47 countries, its international arm represents less than 10 percent of its total business, Granoff said, adding that the company plans to expand in the largest markets in which it operates and in strategic territories, such as Western Europe, Hong Kong, China and the Middle East.

Globally, the brand has launched its footwear line via a piecemeal approach in key department stores, which include Lane Crawford in Hong Kong, Harvey Nichols in the U.K. and Bloomingdale’s in Dubai, United Arab Emirates.

The firm is targeting consistent top-line advancement of 15 to 20 percent and earnings increases in the range of 20 to 25 percent.

“We have achieved double-digit growth and posted total sales growth of 32 percent in the first quarter, with our wholesale business revenue growing 29 percent and our retail business up 41 percent,” Granoff said, noting the company’s robust performance amid the challenging retail environment in the U.S.

One factor impelling Vince’s expansion trajectory, she said, is the brand’s broad appeal, with the customer ranging from age 16 to 60-plus.

“I tell people, ‘My son wears Vince, I wear it, and my mother wears it.’ It’s very unusual that a brand can have such a broad reach, which means our marketing strategy is more about the psychographic than a demographic,” she said.

Frank Doroff, vice chairman and GMM of ready-to-wear at Bloomingdale’s, agreed. “The brand appeals to designer and contemporary customers, and the collection can be used for a multitude of purposes,” he said. “You see people of all ages wearing the brand.”

Moving forward, Vince plans to increase its ad and public relations spend globally. “You will see stepped-up marketing, and it will be dual-gender year-round. In addition to this, we will be broadening the marketing media that we use to take more of an omnichannel approach,” Granoff said.

Even as the company fuels expansion, Granoff said she and her team remain focused on preserving the DNA of the Vince brand. “Looking at the numbers, you can see the success of the company, but to me the ‘aha’ moment is when I talk to people, and they are so passionate about not only what the brand is today, but also what it can do in the future,” she said.