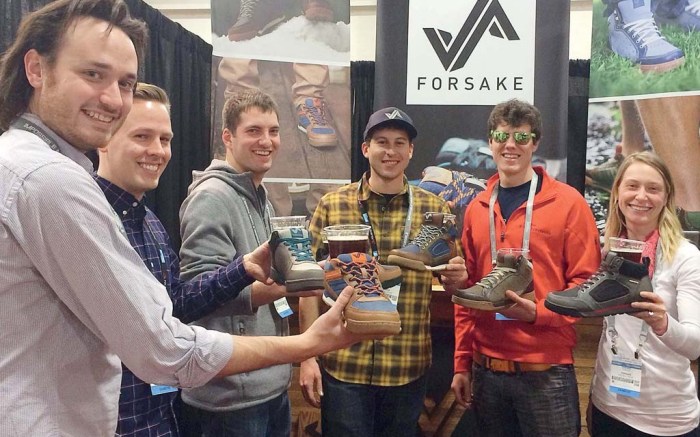 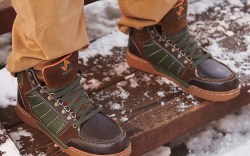 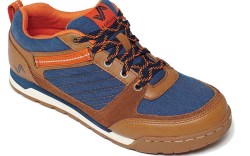 An idea hatched on the slopes and refined in college has turned into a full-fledged shoe business.

Forsake founders Jake Anderson and Sam Barstow met at Union College in upstate New York, and during their junior year, started comparing notes about their time spent as ski instructors out West.

“Everyone we were with was in their late teens and early 20s, and none of us were wearing the appropriate shoes for the environment,” Barstow said. “We were all wearing skate shoes. It was snowy, wet, slippery and we were all soaked to the socks and sliding around.”

Spurred by a business plan competition sponsored by the school, Anderson and Barstow laid the groundwork for a line of men’s boots with skate aesthetics but protective features: waterproof constructions and rugged, gripping outsoles.

Forsake gets its name from “For Sam and Jake,” and the founders got an assist when the school connected them with alumnus Jake Mann, a footwear industry veteran who helped source samples and hire designers. Even after the contest was canceled (Forsake was the only entry), Barstow and Anderson interviewed designers and refined the aesthetic through their senior year. After graduating in 2011, they decided to make a go of it.

“We were cold calling and walking into every store between Boston and upstate New York that sold shoes, spanning the gap between outdoor, performance and fashion. We were both in our early 20s with a suitcase full of shoes,” Barstow said. “We weren’t very successful.”

While some bigger accounts showed interest, the duo’s lack of experience made retailers wary of taking a chance. That’s when the partners turned to Kickstarter.com.

“It seemed like the perfect platform: If we can’t get into stores, how do we get into the hands of the customer,” Barstow said. And after being financed by savings, friends and family, a Kickstarter cash infusion would allow them to get the orders they needed to make the production minimums, he added.

In early 2012, Forsake tried to raise $225,000 on the site, but failed to make the goal. After switching factories for one with lower minimums, the team tried again for a $100,000 campaign, which ended in December 2012 and raised more than $116,000. It was enough for about 1,000 pairs of shoes. Even better, Barstow said, the result provided data they could take back to retailers.

“Kickstarter was our traction,” he said. “We had proof that in a 35-day campaign, 1,000 people committed to buying the shoes without seeing or trying them on.”

Early last year, Forsake gathered enough orders to move ahead with five of its six initial designs and colorways, which hit stores in September 2013. The three high-top models, which retail from $110 to $130, use leather, Cordura, nubuck and suede on the uppers, with a clean, logo-free treatment. The outsoles feature recessed lugs that keep the look casual. For spring ’14, Forsake expanded the line with a low-top model, non-waterproof options and an EVA wedge outsole. And for fall ’14, the brand is adding a high-top on the wedge construction.

Online e-tailer Backcountry.com signed on early, and footwear buyer Emma Hunter said the product has a distinct point of view.

“Winter waterproof is a very popular product, and a lot of brands have it, but [Forsake] comes out of the ski culture around freestyle. We see that demographic — the guy in his 20s and 30s — as a void that needed to be filled,” she said. “I’m a big fan of the colorways, the details and the overall aesthetic. The product is beautifully constructed and holds up well.”

Stella Quatrano, footwear buyer for Boston-based City Sports, said the look of the shoes worked, and so did the positioning.

“It’s a competitive price point and the product looked really good, definitely trend-relevant. We’re seeing a 1990s comeback of the hiker silhouette with speed lacing as an alternate execution for the younger consumer,” she said. “There’s versatility to wear to work and battle the water situation and the commute.”

Now based in Boston, Barstow and Anderson hired Jake Knoll to handle marketing, and after an initial seed round of funding, the team is focused on adding to its 55 accounts and managing the e-commerce operation. They’re also considering ways to grow the brand, including more low-top styles and a potential women’s launch.

“We started by straddling performance and fashion,” Barstow said. “Now we can push in either direction.”