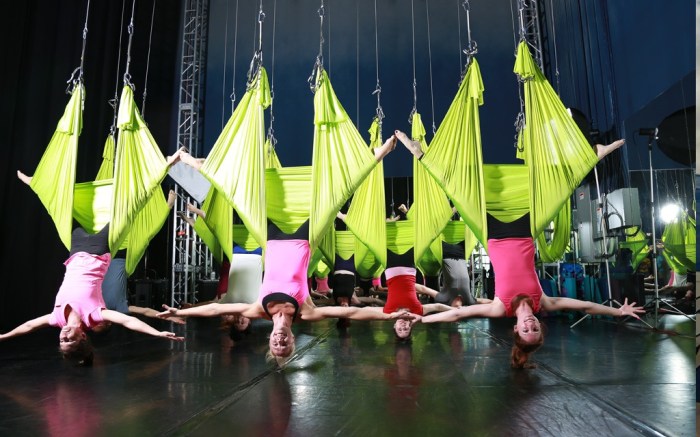 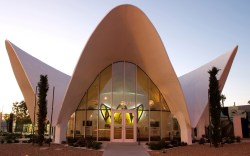 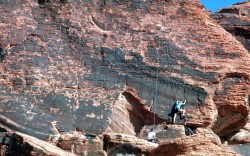 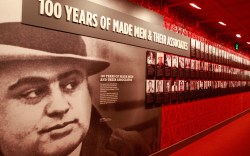 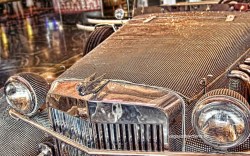 Suit up, take off and explore Sin City, because many of the best sights are off the beaten path. Here’s a look at 10 of the most unexpected spots.

Sky Combat Ace
What: The place for thrill-seekers to realize their “Top Gun” dreams
Where: 1420 Jet Stream Dr., Henderson, Nev.
Why: Grab a pair of aviators and buckle up. Sky Combat Ace has five types of experiences to satiate adrenaline junkies and experienced aviators alike. “If you regularly imagine yourself smack-talking your boss or co-workers, or go so far as to envision shooting them down in an airplane, look no further than SCA’s aerial dogfighting package, Operation Red Flag,” said Richard “Tex” Coe, SCA’s founder and owner. SCA’s latest experience pits two stunt planes against each other in a military training exercise where Blue Air is tasked with protecting a ground target, and Red Air is tasked with destroying it — all at 250 mph.

The Container Park
What: An outdoor shopping and dining venue
Where: 700 Fremont St.
Why: There’s nothing like a greeting from a 40-foot praying mantis that shoots flames. Here, shoppers are encouraged to try everything from a glass of wine at Bin 702 to the Treehouse play area. “The [play area] is definitely a unique experience,” said Zappos CEO Tony Hsieh, who continues to lead the redevelopment of Downtown Las Vegas. “There’s a Swiss Family Robinson-style tree and a container with three slides. It has been a great draw for bringing families … but the adults usually scream louder than the kids.”

Haunted Vegas Tour
What: Vegas’ spookiest destinations
Where: Departs from the Royal Resort at 99 Convention Center Dr.
Why: Equipped with electromagnetic field meters, temperature guns and dowsing rods, ghost-hunters track down the local haunts of Elvis Presley, Bugsy Siegel, Liberace and Redd Fox with the help of paranormal investigator Robert George Allen. “The sites we visit are extremely active with paranormal activity,” said Tom Peck, a guide at Haunted Vegas. “The ghosts provide for an exciting hunt that is a different experience every night.”

Shine Alternative Fitness
What: Exclusive workouts led by world-class performers
Where: 6415 S. Tenaya Way
Why: Fly through the sky like a member of Cirque du Soleil. The show’s dramatic acrobatics have been one of Vegas’ must-see attractions since the production first debuted in the city in the early ’90s. Now, two alumni, Dima Shine and Russ Petroni, have started their own exercise community. Past and present Cirque members teach many of the classes, which range from AntiGravity Yoga to Aerial Arts.

Neon Museum
What: A destination dedicated to the city’s iconic signs
Where: 770 N. Las Vegas Blvd.
Why: “Uncover the story behind the city of bright lights on this tour, home to more than 150 of Las Vegas’ famous signs,” said Alice Glaze, product executive at Quintessentially Travel. The collection includes some of the most iconic relics from casinos and local businesses, each representing a piece of the city’s heritage. Highlights include artifacts from the Lucky Cuss Motel, the Silver Slipper, Binion’s Horseshoe and more.

Dig This
What: America’s first heavy-equipment playground
Where: 3012 S. Rancho Dr.
Why: Guests can dig, trench, push and pile in heavy-metal yellow toys for adults. The Nevada chapter of this construction-yard-come-to-life welcomed its first patrons (two women) in 2011, and now half of all clients are females. “Playing bucket basketball is a favorite,” explained founder Ed Mumm. “We line up construction cones, then place a basketball on top of each, and [guests have] to maneuver the bucket and scoop up the basketball without knocking it off the cone before dropping it in 2,000-pound tires.”

Red Rock Canyon
What: Nevada’s first national conservation area
Where: Charleston Blvd./State Route 159
Why: Jump on a horse and head west for more than 30 miles of hiking trails in the Mojave Desert. “A maze of canyons and peaks, ledges and chimneys, chutes and gullies, discover surprises around every corner,” said Quintessentially Travel’s Glaze.

The Mob Museum
What: A look inside the contentious fight between organized crime and law enforcement
Where: 300 E. Stewart Ave.
Why: Can’t get enough of “Casino”? This museum tracks the legacy of gangsters (Al Capone, Whitey Bulger, Lefty Rosenthal) and crime busters (J. Edgar Hoover, Eliot Ness, Elmer Irey) to find out how Vegas became an “open city” for organized crime. “Signature artifacts include the St. Valentine’s Day Wall, where seven men affiliated with the Moran gang were murdered by the South Side Italian gang led by Al Capone in Chicago on Feb. 14, 1929,” said Carolyn Fisher, the museum’s registrar. “From their first sale in 1967, the bricks were lettered and numbered, allowing the museum to accurately assemble and display the wall in a manner very close to its original format. Although some bricks were sold over the years, the bullet holes remain.”

Liberace Collection
What: Peek into the life of the man who best represents Vegas.
Where: Currently touring at the Cosmopolitan Hotel
Why: Since HBO’s “Behind the Candelabra,” this Vegas music man is having a major moment. Liberace’s most intricate costumes, blinged-out cars, dinnerware, footwear and jewelry are on show in the touring collection. Jonathan Warren, chairman of The Liberace Foundation, said his organization is preparing to expand the exhibit, but even two new permanent locations in Vegas cannot house all the opulence.