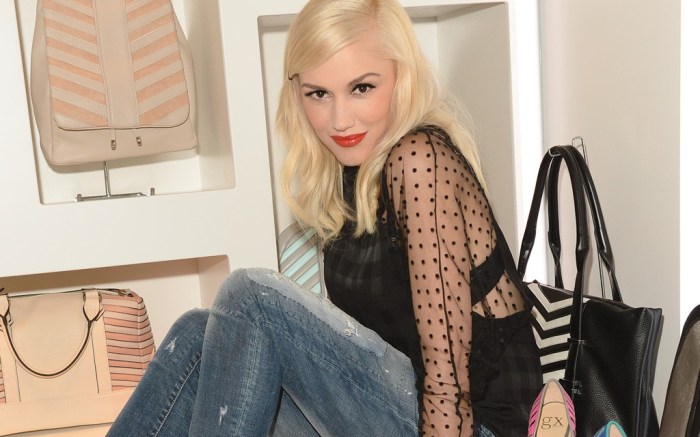 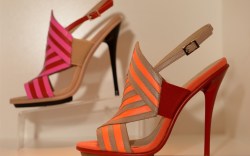 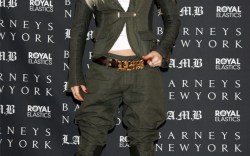 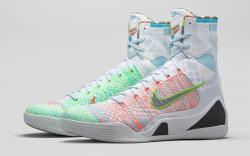 “It feels like one of those moments when something exciting is bubbling,” said Gwen Stefani, sitting in Titan Industries’ showroom in midtown New York earlier this month. “I’m in a new chapter and a new phase.”
She had just finished feting her new footwear line at a packed event, spending more than an hour greeting top buyers. Many acted like starstruck fans as they posed for pictures with the musician-turned-designer. Titan CEO Joe Ouaknine acted as the unofficial photographer for the evening, perfecting iPhone shots for his retail partners.

Stefani was clearly energized about the rollout of Gx by Gwen Stefani and her other high-profile projects on deck, including an upcoming gig as a coach on NBC’s hit show, “The Voice” and a return to New York Fashion Week. She’s also settling into another big role: being a mother of three. Son Apollo, who was born earlier this year, was on hand at the party, and Stefani took time out to feed him after guests admired him.
It’s certainly a lot to juggle, but the 44-year-old songstress is excited about the opportunity to move back into the fast lane.

“It has all happened very spontaneously, but timing is everything,” said the founder and creative director of Gx. “I never thought I would get this far.”
In fact, Stefani is one of the few celebrities who’s achieved staying power in a fast-changing, highly competitive fashion business. She launched her L.A.M.B. footwear label with Titan nearly a decade ago and still operates that line today. After building expertise, Stefani told FN Spy that bowing a secondary line with Titan felt like a natural move.

“[Designing] feels a little more accepted in a way [than when I started], and maybe that’s why this timing doesn’t feel weird at all,” she said. “I feel that I’ve earned the right to be able to do this now, and at the end of the day, an accessory line feels good.”

The Gx product, which launched exclusively on ShoeDazzle earlier this year at a price points between $59 and $129, has gotten off to a strong start. “It’s sexy and aggressive product, and it has an edge to it,” said Tim Callahan, SVP of merchandising, production and design for ShoeDazzle. “We prefer [to work with] people who have a fashion background than a celebrity. She used to make her own costumes [on tour].”
For spring, the collection of more than 40 styles will be introduced at select Nordstrom doors exclusively for one month. Then it will roll out to Amazon.com, Shopbop.com, Belk and select independents. (ShoeDazzle will continue stocking the collection, with some exclusive styles.)

“Gwen has an amazing personal aesthetic, and her distinct take on fashion shines through in Gx,” said Scott Meden, EVP and GMM of shoes at Nordstrom, noting that the retailer has seen strong success with L.A.M.B. “We think our customers are going to be excited about this line’s unique styling, colors and materials.”
In addition to expanding her relationship with top retailers, Stefani said the project offered her an opportunity to reach consumers who were looking for a more accessible price point than the core L.A.M.B. line, priced between $250 and $395, saying, “This is for someone who can’t afford a more expensive shoe.” But that isn’t always easy, she acknowledged. “It’s really hard to make shoes at this price point look good.”
Her favorite looks for spring? “I love the booties and all of the color. It’s fun to be able to wear color, it’s a great way to be bold. I also love incorporating a lot of tribal [influences],” she said.

Amazon Fashion believes its customers will also gravitate to the bright shoes. “Gwen Stefani is an icon whose distinct personal style resonates with so many people,” said Yasmine Lee, GMM of women’s shoes and handbags for Amazon Fashion. “These are shoes that make a statement. Customers will love the edgy design and pops of color.”
For his part, Ouaknine said Stefani’s role is critical in making sure the collection has a distinct voice. “Gwen is involved in the trend and direction of the collection, plus the approval process,” he said. “Her interaction with customers is great, and the product speaks for itself.”

Stefani also wants to speak to shoppers through social media platforms, which she views as an important marketing vehicle.

“The way I’ve always promoted [styles] in the past is to wear them,” she said. “I’ve been working hard over the last year-and-a-half to get on that social bandwagon. It’s fun to have access to people who care about what I’m doing and show a picture of my shoe. That power feels good.”

The star — who is also working on revamping her personal site (Gwenstefani.com) — said she also appreciates the feedback she receives from consumers through social media.“It’s interesting to know when things don’t work,” said Stefani, whose favorite platform is Instagram. On the flip side, “when you have a hit and you get feedback, it [helps shape future lines creatively].”

For Stefani, being creative has always been a central focus, whether she’s on stage or in the design studio. In fact, at one time, she thought her fashion career would eventually become her main gig.

“I knew that this magic and whatever was happening in my [music career] wasn’t going to last. I’m a logical person,” she said.

To the contrary, Stefani is still making music and will perform in New York’s Central Park with Jay-Z on Sept. 27. Plus, she will tap her decades of experience to serve alongside Pharrell Williams as a coach on “The Voice,” which returns for its seventh season on Sept. 22.

Stefani said she will likely wear Gx styles on the show, but she admitted the heel heights might not be the right fit for on-stage performances.

“I have to wear something that I can move in,” she told FN Spy. “I wear menswear-[inspired looks] a lot, it gives me more of a masculine feeling. I grew up wearing Dr. Martens on stage.”
As she gears up for “The Voice,” Stefani is also looking forward to her return to the New York Fashion Week stage with her L.A.M.B. collection after several years on the sidelines. “The reason I’ve skipped out is because my kids usually start school that week, and how do you say, ‘I’ll be in New York while you’re starting kindergarten’? I just couldn’t do that,” she said.

As she preps for her showing this year, Stefani said she enjoys all aspects of creating a production. “The idea is to keep making it fresh. I love picking the models, the hair, the makeup, and I love creating pieces that are special for the show. It’s one of those things that always comes together last minute,” she said.
For all of her fashion collections, her family remains a big source of inspiration, particularly for her Harajuku Mini collection. “I love doing the kids’ line; I spent about an hour-and-a-half this morning looking at Korean children’s clothes online,” she said.

Balancing all of her ventures will certainly be a challenge, but Stefani said she’s looking at this new chapter with enthusiasm. “Everything comes in waves and happens for a reason,” she added. “These [projects] are all my babies, and it’s incredible to have. I never thought I could do so many things at one time, but I have so many creative people on my team [so I have that ability].”
“Any idea or project, she is open to it,” Ouaknine added. “She challenges me, and we’ve always found a way to make [the product] better.”
After 10 years with Titan, Stefani is confident about the future with her partner. And she already has her eye on category expansion for Gx.
“I would love to do clothes to go with Gx,” she said. “The sky is the limit, as they say.”