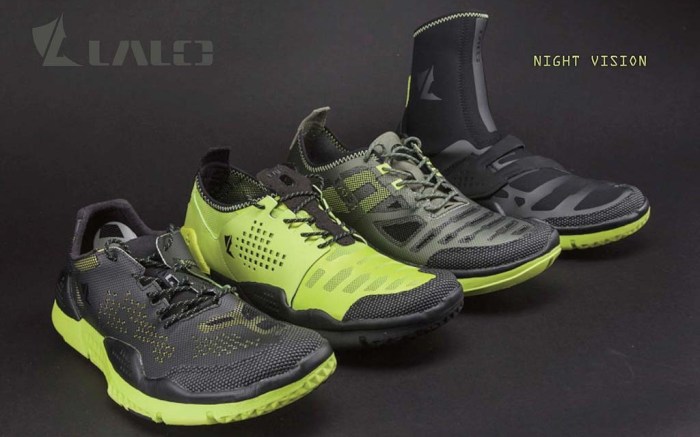 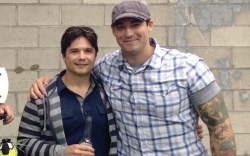 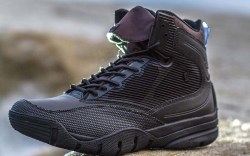 Lalo Footwear, the brainchild of former Navy SEAL Nathanael Roberti, will offer a tactical perspective to the fitness and training market for fall.

Named for Roberti’s childhood moniker, the line of training shoes and tactical boots was built to withstand punishing workouts and drills — whether military-issued or on a CrossFit circuit or adventure race.

To create Lalo, Roberti partnered in 2013 with CEO Jay Taylor, who previously launched Hoka One One in North America. The line is designed and developed with industry vets Kyle Pulli and Nathan Crary, while Roberti brings his firsthand experience to the design process.

He said his goal is to improve upon the ill-adapted footwear he wore in training, crafting boots and shoes that are flexible, durable and comfortable. The resulting line consists of three men’s and women’s tactical boots retailing for $225 to $350, designed for use in both wet and dry environments. “SEALs need something light, quick, fast, packable and breathable,” Roberti said.

“[People are] looking for something they can train in or use in a Tough Mudder, Spartan Race or Warrior Dash,” Taylor said. “We knew if it was good enough for SEAL teams to train in, it would be good enough for civilian use. There’s a huge hole in the market for an authentic brand to bring product for those categories.”

Targeting specialty running, hunting-and-fishing, law enforcement and military channels, the collection debuts July 1, 2014. The label plans to raise awareness online. Its website is currently holding a promotion for a 2014 Chevrolet Silverado giveaway. The truck will be decked out with Lalo branding. By gathering the zip codes of interested parties, Taylor said, Lalo can pinpoint local specialty stores in particular areas.

The Founder
Nathanael Roberti (at right, with designer Kyle Pulli) began working on the prototype for the Lalo boot in late 2007, after leaving the Navy SEALs program in 2006.

The Buzz
Mark Rouse, owner of Runners High ’n Tri in Arlington Heights, Ill., was among the first retailers to write an order for Lalo, and said the product should help the store bring in a new customer. “We’re seeing a large growth in the Warrior Dash and Spartan Race kind of events, and Lalo is really good for that,” he said. “We want to be at the cutting edge and this appealed to us.”

The Inspiration
Roberti said the loss of 11 of his teammates in a helicopter crash in Afghanistan in June 2005 — part of Operation Red Wings, which was profiled in the book “Lone Survivor” — drove him to create the line. “I started this [brand] because I wanted to do something to carry on the legacy of the guys who had fallen, my brothers,” he said.