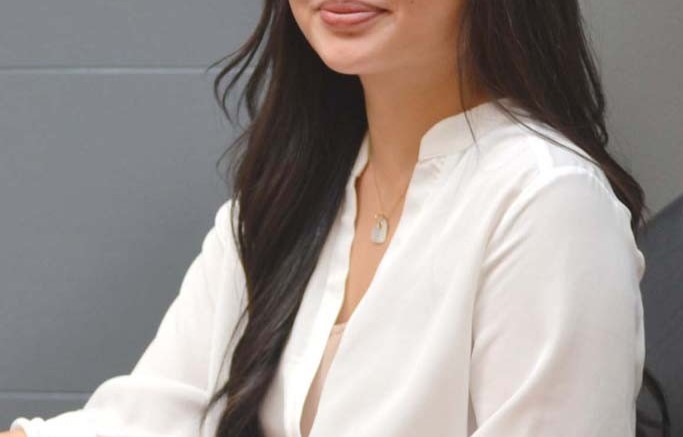 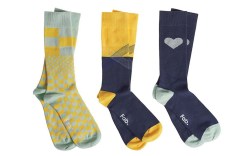 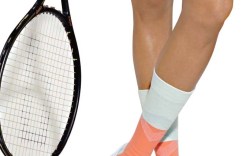 Fab.com is looking to legwear to kick off its next growth phase.

The New York-based e-tailer launched socks for men and women under its in-house Fab label for spring ’14 and plans to develop the category further for fall. “Socks are a trend that isn’t going anywhere,” said Fab.com’s VP of design, Evan Clabots.

Retailing at $19 for three pairs, Fab Socks are priced comparably to the other bold, style-driven legwear brands carried by the e-commerce site, including Cynthia Rowley, Stance, Happy Socks, Richer Poorer, Hansel from Basel and Da-Sein.

It’s a rebuilding year for Fab, which began as a design-centric flash sale site in 2010 and quickly garnered backing from big names like Ashton Kutcher and venture funds such as SV Angel. The firm shifted to a more traditional selling format emphasizing social media earlier this year, following a tumultuous 2013 that saw hundreds of layoffs and the exit of co-founder Bradford Shellhammer.

Under its new model, Fab is on the upswing again, boasting more than 12 million customers and an evolving product mix. Part of the company’s continuing resurgence plan includes making a name for itself in personal fashion accessories.

The move is logical, considering that, overall, fashion and accessories have performed well for Fab. Although the firm declined to share updated details, accessories made up 20 percent of overall sales in 2012 (second only to home goods, per a press release dated June 2013) and continue to drive a good portion of the business. “For our female customers, jewelry, bags and scarves show consistent high demand, and we are exploring new [Fab-branded] and designer collaborations in those subcategories,” said Renee Wong, GM of personal accessories at Fab. “Consistent consumer demand, a longer sales runway and an accessible price point make accessories an attractive area for in-house development.”

Fab’s foray into hosiery is an important part of that larger push, according to Clabots. “This year, Fab will launch a wide range of original product,” he said. “Since our start, we’ve been curating a shop of great products from a wide range of designers, and we’re excited to add our own voice to the mix. We’ve been developing Fab-branded furniture, lighting and home textiles, as well as jewelry, bags, socks and other personal accessories.” He added that a scarf collaboration is in the works with home-goods designer Caroline Hurley. In addition, the firm plans to exhibit its new private-label offerings in Manhattan as part of the NYC x Design festival in May.

Hosiery was a practical place to start, according to Fab designer Anne Lopez, who created the debut patterns and colorways. “[Socks] are a relatively low-impact way to test our design direction in the accessory market,” said Lopez, who started at Fab as a graphic designer in 2011 before transitioning to textile design.

And the response has been particularly strong in the men’s market. “We are seeing a consistent increase in demand for socks, especially for men,” Clabots said. “It’s an easy way for men to updated their look. Socks are a great accessory category for us to explore in-house [because] sizing and fit are straightforward, there is no shelf life and the price point is accessible.”

It also makes sense from a business perspective, according to Sucharita Mulpuru, VP and principal analyst at Forrester Research. “It seems like a low-risk experiment,” the e-commerce expert said. But she also was quick to point out that such a move can have risks when it comes to the payoff. “It’s likely low reward as well. Most off-price retailers start to manufacture goods at some point … because that’s the only way you grow and grow profitably. I assume Fab is more focused on profit [now], as they’re still around … and they seem to want to try new, profitable, albeit small, initiatives.”

And not all socks are created equal. “To be clear, we don’t see an increasing demand for [ordinary] socks,” Clabots said. “We’ve experimented with offering basics, and those don’t excite our shopper. The socks that entice people to buy are colorful, playful, quirky pairs.”

Lopez agreed: “While female shoppers have had compelling sock options for years, we are finding that men are increasingly looking for ways to incorporate color and design into their outfits. Socks are the easiest way to do it and will continue to be [popular], though we also are seeing fun options in shoelaces, which might be the next-easiest way to jazz up your footwear.”

The designer noted that, while Fab Socks are now exclusive to the brand’s website, wholesale could be an option for the near future. Also on the horizon is an expanded mix, including ankle and knee socks. “We are pleased with the [consumer] response,” Lopez said. “The sell-through has been on track, and we are excited to grow the private-label offering in our collection.”