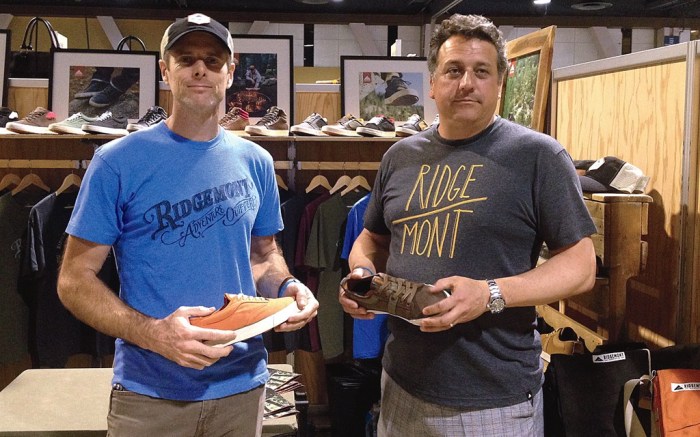 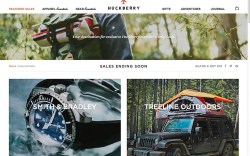 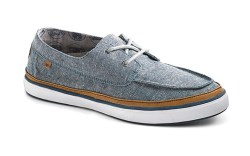 What is the new outdoors?

A crop of young brands seek to answer that question by launching rugged but style-conscious product with a new vision for the category — one that blurs the lines between outdoor and not.

The product is garnering buzz, though these labels face challenges as they work to find their place in the market.

Long Beach, Calif.-based Ridgemont Outfitters, the brainchild of former pro skater and Duffs executive Stacy Lowery and business partner Alex Hall, grew out of Lowery’s search for a pair of shoes for his Costa Rica honeymoon. “Everything that was built to last for the duration of the trip would make me look like a crazy person walking around the airport,” he said. “I would have had to become a different person to buy those shoes.”

The four-style men’s line soft launched last summer at the Agenda: Long Beach streetwear show. The line features oiled suedes, leathers and waxed canvas uppers, and a stable shank on a vulcanized construction, which the team borrowed from the skate world. The shoes are built for everyday outdoor activities, like taking the dog for a walk or scrambling down to the surf, but won’t alienate stylish shoppers, Lowery said.

“Outdoor is booming, and other sectors are getting younger and more influenced by the [action-sports] world, but nothing was happening in footwear,” said Lowery, who watched the market for a full year expecting a bigger company to have the same insight. “If I was feeling this way, there had to be other people who’d grown up in skate, snowboarding, BMX and similar activities who had a personal aesthetic that didn’t mesh with what was on the shoe wall, but still wanted to enjoy the outdoors.”

The time might be right for the worlds to collide.

And Eli Marmar, one of the founders of 3-year-old Freewaters Footwear, based in Portola Valley, Calif., said the market has been moving steadily toward an intersection. “All the lines are being crossed between what used to be outdoor and athletic, and street fashion and high fashion,” he said.

“We’re for guys who live and work in the city but try to get out as much as possible. And Ridgemont is definitely for the everyday guy,” said Huckberry buyer Michael Belen. “If you go to an REI and pick up a pair of hiking boots, they’re almost scary — they feel like they’re gearing up for huge elevations. That’s why we liked Ridgemonts: They relate to the normal guy. They’re strong enough to support you when you’re going on a weekend hike, but stylish enough to outfit you for the local cafe.”

Greg Zuckerman, buyer for Boston-based City Sports, said that stocking smaller brands with style-conscious outlooks is crucial to connecting with active young shoppers, even if it means taking on more risk in the business. “We continue to sell legacy pieces and the brands that are our bread and butter, but we need something to excite the consumer,” he said. “Finding ways to bring in those vendors in a financially responsible way is the beating heart of City Sports.”

For the brands, getting established in an ultracompetitive market isn’t easy. Marmar said many retail accounts have asked to see proof of customer demand before writing orders. “They want new, but they want guaranteed — new without the risk,” he said. “People love supporting the smaller brands, but at the end of the day, you still come up against a lot of barriers.”

Ridgemont’s Lowery noted that finding the sweet spot for the product mix will be essential. “It’s still very much a case of, we know our customers are out there, but what are the right avenues to get to them?”

There are opportunities outside the sporting goods channel. Streetwear boutiques have shown increased interest in the category for several seasons. And thanks to the hot heritage trend, fashion- and trend-oriented stores are adding classic outdoor labels to their mixes.

Core category players may be catching up, too. Earlier this month, Outdoor Retailer announced that its upcoming event will host a new area, dubbed Venture Out, to showcase what show organizer Emerald Expositions calls “the modern outdoors.”

“There is a growing trend of urban, younger consumers seeking outdoor experiences that aren’t the classic ‘man with ice axe on side of cliff’ things,” said Scott McGuire, president of Mammoth Lake, Calif.-based Mountain Lab, the branding company developing Venture Out.

He pointed out that new brands can play an important role in that space. “A lot of the traditional outdoor brands don’t resonate with their experience. They’re too hardcore or they don’t match with the aesthetics. I see people wearing Stance socks, board shorts and skate shoes coming off the trail taking pictures for their Tumblr. And they’re having an outdoor experience.”