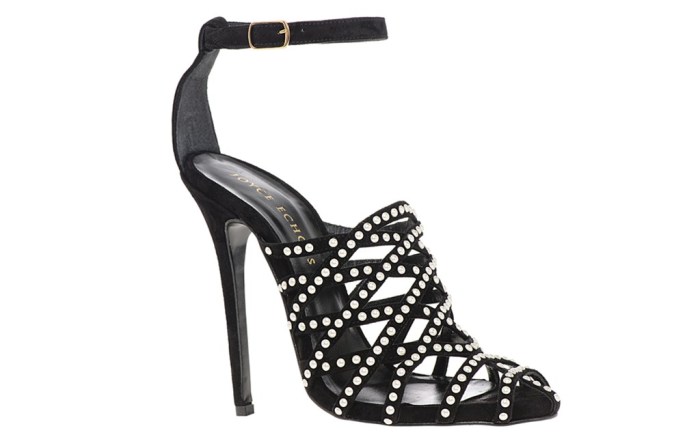 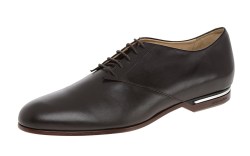 In addition to the core namesake line, the company has inked a production deal for two collections. Beginning for spring ’15, it will distribute Aston Martin footwear in the U.S., Canada and South America. It has also agreed to produce and distribute Joyce Echols, a new Texas-based designer.

“We’ve had a steady business for the past three years, but we want to be a better company,” said CEO Roberto Angiolucci, who helms the brand with his wife, Claudia Ciuti. “We like new projects.”

Echols partnered with Angiolucci for her first namesake collection. Priced between $450 and $1,950, the styles take large inspiration from her hometown — think longhorn bulls, barbed wire and guns added as details.

“She is very different than what is around, and women don’t want to look like everybody else,” Angiolucci said. “The design is very unique, and we believe there is big potential there.”

Currently, the collection is confirmed to sell at independents such as Forty Five Ten in Dallas, Tootsies in Houston and Fred Segal in Los Angeles.

Echols described her looks as “classy but with a little bit of brash.

“The women in Texas are strong, but very fashionable,” she said of her inspiration.

Aston Martin, affiliated with the luxury car brand, is priced between $675 and $875 for both men’s and women’s styles. When it launches in the U.S., it will aim for high-end distribution such as in department stores Neiman Marcus, Bergdorf Goodman and Nordstrom.

“Aston Martin has a very strong name. Right now, they are in demand,” Angiolucci said.

But he admitted to challenges when launching an established Italian brand in the U.S.

“It’s a mentality change, and it takes time to build something,” he said, adding that the brand would start hosting events in the U.S. to generate buzz and awareness.

For the core line, designer Claudia Ciuti dropped the price point to between $295 and $395 (lower compared with a few seasons ago), with flat sandals and new snake- and flower-embossed prints on deck for spring.

“Summer ’15 represents one more chance to evolve the collection in a much faster and trendier direction, still respecting the market’s request of walkable heights for the heels,” Ciuti said.

Meanwhile, Boemos is banking on the fact that the men’s market is changing and gaining momentum.

“Men’s shoes have always been black and brown, and now men are more willing to buy colors and new constructions,” Angiolucci said. “You can even have a suit with sporty shoes.”

All of the company’s brands will be manufactured in Italy.

“Producing in Italy is not easy — shoes are more expensive — but we’ve known the [landscape] there for 20 years,” he said.

Ultimately, Angiolucci is bullish that the new additions will grow his company in 2015.

“The year looks good,” he said. “We are on the right pace, and it makes sense to buy something different when business is good. We love the customers to try something new.”