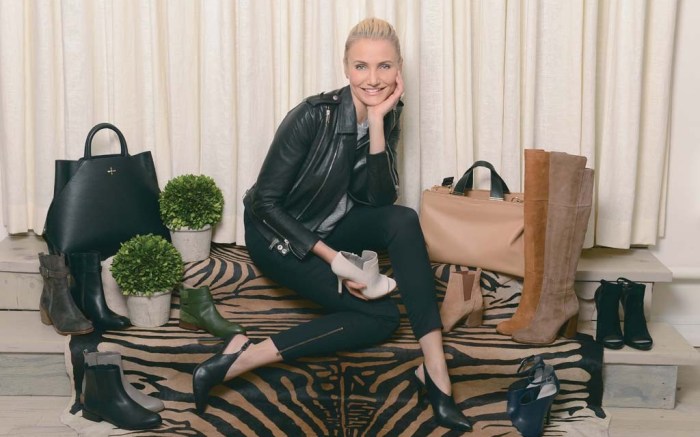 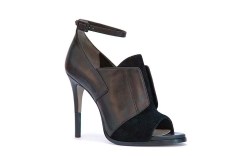 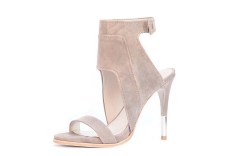 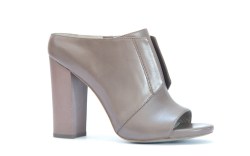 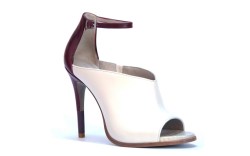 Cameron Diaz understands the power of face time. In the last few weeks she’s put in a lot of it.

The actress has crisscrossed the country to plug “The Body Book,” her new female-focused health guide championing a smart diet and frequent fitness. She also wrapped up filming on several blockbuster hopefuls, from the remake of “Annie” to the upcoming comedy “The Other Woman,” both of which will require a punishing promotional schedule in the months ahead.

For Diaz, who became artistic director of the brand’s parent company, PLV Studio, last summer, it may be the most challenging and demanding role she’s taken on so far.

The 41-year-old said she had to learn — and adjust to — how fast the industry’s production pipeline moves and what types of shoes could realistically be made for consumers. She’s also had to figure out ways to provide input and real-time feedback in between a crowded entertainment calendar.

“In the movie business, things move quickly, too, even more so over the years. We’re used to approving marketing materials before we’ve finished filming,” Diaz told Footwear News in an exclusive interview at PLV’s New York headquarters, just hours after flying in from Chicago for a book signing and an appearance on “Good Morning America” for the second time in a week.

“But in fashion,” she explained, “you have pre-fall, fall, holiday. You have all these little mini collections that you have to do. I can’t keep track of it. It’s literally not my language. But I’m trying to learn it. They are teaching me and I’m learning from them, and they are learning from me.”

Make no mistake, Diaz is serious about this endeavor.

As she settles into a chair in the firm’s 33rd Street penthouse showroom, the actress balances low-key composure with youthful enthusiasm. For two hours, she is a perfect picture in contrast: provocative and professional, goofy and grounded.

Dressed in black pants, leather jacket and a gray top, Diaz said she brings a more sophisticated taste level to the brand, which debuted for spring ’08. In fact, the day after signing the two-year contract — terms of the deal weren’t disclosed but Diaz said she didn’t invest in the company and characterized the arrangement as a “partnership” — the A-lister was on set for PLV’s fall ’13 advertising campaign to “add my two cents.” The ads were shot by Terry Richardson and featured model Jessica Hart.

Since then, Diaz said, she has aimed to “refine” and “pare down” the collection of footwear and handbags priced in the $250-to-$500 range. (Diaz doesn’t have any involvement with the firm’s lower-priced line, Kelsi Dagger.)

“When I first came to PLV, I saw the potential in it because it was a brand that didn’t really have its own identity. It was a little bit all over the place,” the star said. “I looked at it as an opportunity to help create that.”

But doing so wasn’t necessarily easy.

When planning began for the fall ’14 season, Diaz was in the middle of shooting “Annie.” For her, that meant that in between takes she often went to her trailer to review samples of bags and shoes. At other times, she made late-night visits to the showroom to weigh in on prototypes.

“This is very important to me,” Diaz stressed. “I’m not a person who does anything halfway.”

She worked closely with PLV’s co-founder and executive creative director, David Giordano, and said her first collection “let go of the over-detailed shoes, the ones with too many bells-and-whistles. We brought it down to something clean.”

The actress put her stamp on half of the pre-fall product and 80 percent of the fall line, and the end result is a collection that is feminine-chic with a bit of an edge.
Diaz’s eye for detail is evident in many specific ways.

For instance, she suggested lowering a few heel heights and tweaking color combinations on some styles. Other heels now feature sexier ankle straps and toe details that the firm hadn’t tried before.

Shopbop.com, which has had a solid business with Pour La Victoire for a few seasons, plans to boost its buy for fall. The site’s DMM of accessories, Stephanie Nelson, said that with Diaz’s involvement “we have more opportunity with the brand.”

Nelson added, “All the elements that do well with our customers — high, clean sandals, cutout details, open-toe booties, shoes that work for day into night — she is adding to the line. Consumers will be excited.”

Diaz isn’t a celebrity who regularly lends her name and know-how to businesses. For most of her career, she has largely shied away from endorsement deals and brand ambassadorships, with a rare exception last year for Swiss watchmaker Tag Heuer.

For their part, PLV executives believe few people are better suited to this sort of high-profile undertaking.

“She lives a lifestyle we all dream about,” said PLV Studio CEO Chris Nakatani. “Cameron brings an elevated taste level and an elevated perspective to the line and its design process.”

He also brought up the actress’ exposure to all levels of fashion — from runways to red carpets — and the fact that her regular appearances in front of the cameras could only help fuel growth.

The goal, Nakatani said, is to broaden Pour La Victoire’s business at stores such as Bergdorf Goodman, Bloomingdale’s and Neiman Marcus, among others.

Still, the brand faces a tough climb. There are already a number of successful celebrity footwear collaborations fighting for space in the market, from Jessica Simpson and Sarah Jessica Parker to Fergie, Gwen Stefani and Ivanka Trump.

Nakatani and Diaz both said her name will not appear on the line. Likewise, she won’t be featured in any ads.

The CEO said the messaging will “come organically” and that the team is still figuring out the exact details.

He did hint Diaz could offer commentary on PLV’s website, as well as draw attention to the line with more posts on her recently launched personal Twitter account and through interviews with consumer magazines timed for when the product hits stores.

Giordano added that any brand mention must be authentic to Diaz. “She’s helping us behind the scenes in ways people are going to love,” he said.

For her part, Diaz said she hopes the shoes resonate for the right reasons. “I don’t want girls to aspire to be me. That’s not what this brand is about. It’s not about wearing a shoe I would wear,” she said. “I want them to see themselves in this shoe.”