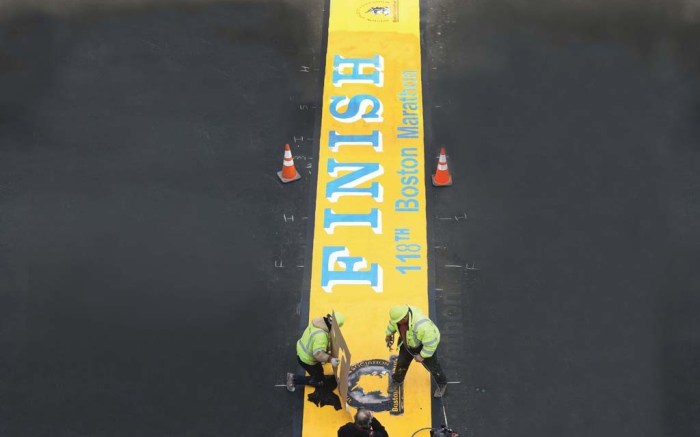 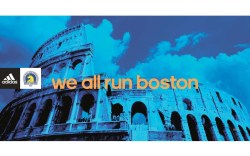 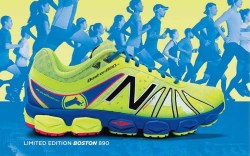 A year after the Boston Marathon bombings, running brands and retailers are entering the race with a renewed sense of enthusiasm.

“Our message is to celebrate this year’s marathon,” said Lauren Blanda, GM of merchandising at Boston-based athletic retailer City Sports. “We’ll be nodding to [the events] last year, but our goal is to not have a somber tone at all, but to celebrate Boston and celebrate running.”

Security has been bumped up for the April 21 competition. About 3,500 police officers (twice as many as last year) will be on the scene, and spectators are discouraged from carrying large bags, covering their faces or carrying more than a liter of liquids. But race officials and affiliates told Footwear News the main focus is on promoting the event.

“It’s going to be an amazing Boston Marathon, regardless of how effective we and our competitors are at our activations,” said Adidas’ director of running, Mikal Peveto. “It’s going to be cathartic for a lot of people.”

While entry slots in the qualifiers-only race are always at a premium, the Boston Athletic Association cited “significantly increased interest” in the 2014 marathon. To adapt, 9,000 more spaces were made available, with a little more than half of those spaces filled by 2013 runners who weren’t able to finish. (This year’s race, with 36,000 runners, will be one of the largest ever fielded.)

As a result, the city and its stores expect a similar rise in tourist traffic. According to reports, as many as 1 million spectators — or double the standard number — are predicted for the day.

The firm has a location on Boylston Street in between where the two bombs detonated last year, and it plans to host an event there for the public the night before the race.

The store’s windows and interior will be decked out in partnership with Boston-based New Balance. The athletic brand also will supply sister store Concepts with an exclusive made-in-America makeup of the label’s 574 heritage running shoe.

Lexington, Mass.-based Saucony, a division of Rockford, Mich.-based Wolverine World Wide Inc., is keeping the tragic events of 2013 top of mind, according to Chris Lindner, chief marketing officer and SVP of sales.

“Our focus continues to be on the spirit and resiliency of all those affected by last year’s events, the heart and soul of this iconic race and the whole Boston community, of which we are a part,” he said.

Saucony is supplying race kits for the 108 members of Team MR8, a charity team formed by the parents of Martin Richard, who was 8 years old when he was killed in the explosions. The company also created the “Martin Richard Saucony Run for Good Grant,” which awarded $10,000 to Boston’s Youth Enrichment Services, a track-and-field program in which Richard and his family participated.

Puma’s U.S. division, based in Westford, Mass., is holding an event at its Newbury Street shop to benefit The One Fund, the charity established in the wake of the bombings to aid those affected. According to a spokeswoman, the brand will donate money for each mile notched by runners on an in-store treadmill set up for marathon weekend.

And Adidas, which has sponsored the Boston Marathon for the past 26 years, also is helping to support The One Fund. The brand is providing VIP race-day service (special escorts to the start line and pre- and post-race treatment) to donors who bid on spots on the One Fund Team. The team was created by race organizers the Boston Athletic Association and running shop Marathon Sports, whose Boylston Street location was directly behind the first blast. The goal, Peveto said, was to raise $500,000, an amount the team has surpassed.

“After last year, everyone was humbled by the outpouring of support and the sense of community,” he said. “After a tragic event like that, the world seems to be a lot smaller all of a sudden.”

City Sports plans to host a question-and-answer session at its Boylston Street store on April 15 with race director Dave McGillivray. Runners will be able to get informed and prepared for the race, Blanda said, particularly important with both the larger field this year and the added security measures. “Runners get so nervous,” she said. “It’ll be a great way to get people in the store and calm their nerves.”

City Sports also is partnering with New Balance to promote the brand’s “We Are Boston” campaign.

“We knew that 2014 was going to be really special for all of us in Boston,” said Andy Downin, running events manager for New Balance. He noted the brand spent time trying to decide what kind of message would be appropriate this time around. “Where we settled was a celebration of and love of our city. Companywide, let’s just celebrate the city we love and our home, and moving forward.”

New Balance has always made outdoor marketing a cornerstone of its marathon push. This year, the company has added the Prudential Center, near the finish line, where it will display banners with the “We Are Boston” message.

The athletic firm’s street marketing team kicked off the messaging early, Downin said, taking to the streets with shirts that said “I Love Boston Because —.” While passing out markers, they asked people to fill in the blanks and then post a picture on Instagram with the tag #loveBoston.

Downin said the response was overwhelming. “People were coming out of restaurants as they were eating dinner, so excited to tell us what they loved about Boston, whether it was people who were born and raised here or tourists visiting.”

And Adidas’ Peveto added that everyone is looking ahead and not back.

“This is a new beginning,” he said. “There’s a lot of reverence and there will be a lot of events commemorating last year’s tragedy, but as the race begins, it’s a new day for the Boston marathon, and we’re looking forward to that.”

The footwear crowd is always a fixture at the highly competitive Boston Marathon, but brands and retailers told FN the interest in the 2014 race has been off the charts. “We send a big team every year, but we knew very early on that [for 2014] there were a lot more people wanting to run and be a part of it,” said Mikal Peveto, director of running for Adidas. Here, athletes preparing for this year’s marathon share the reasons they’re lacing up.

Lester Wasserman, owner of West NYC (did not finish in 2013):
“It will be very safe. I can see the starting line being emotional. I’m really excited. For that race day, it’s all worth it. You’re a hero that day.”

Tarek Hassan, co-owner, The Tannery (did not finish in 2013):
“I want to finish. I feel like [the bombers] stole that away from me, so I want to be able to cross that finish line. And I want to show my support for Boston and show that we’re not afraid of anything.”

Greg Zuckerman, footwear buyer for City Sports (first-timer runner):
“It’s definitely going to be an emotionally charged weekend, and most people are approaching it with a super-positive vibe, which should make it a celebration rather than the inverse.”

Tim Perry, marketing manager for running at Puma (finished his third Boston marathon in 2013):
“I expect this year’s event to serve as a form of healing and collective therapy for the victims, runners and city as a whole. I’ve never been more excited for the Boston Marathon.”