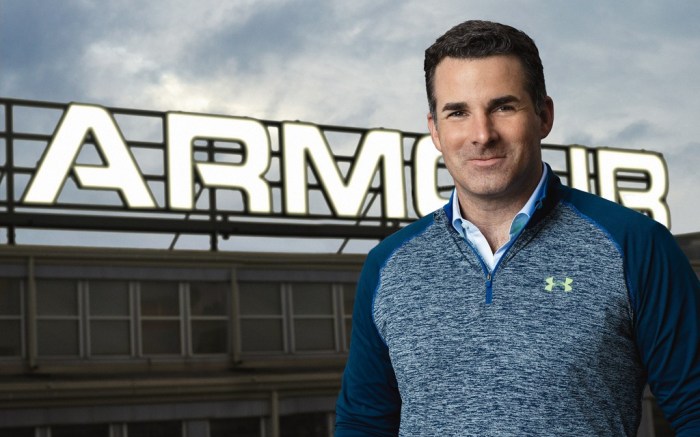 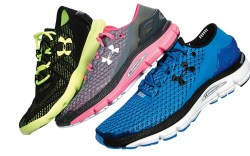 In Baltimore’s Locust Point, a hub of former industrial buildings now turned into homes for hipsters and businesses, activity was thriving last Tuesday, even as temperatures threatened the 100-degree mark.

It was shortly after 1 p.m., and a dozen fitness-minded people were outside on Under Armour’s replica of a football field doing pushups, lifting weights, lunging and running sprints. They were all young and buff, and they were committed to sweat-testing company gear.

Inside the adjacent building overlooking the company-branded field (nearly everything here has the interlocking UA logo somewhere on it), Kevin Plank sat at a conference table in his office, talking about where the nearly $3 billion athletic brand he built is headed next and his obsession with fixing the things Under Armour doesn’t excel at.

Known for fostering an aggressive, if at times brash, corporate culture, Plank was open about lessons he’s learned as CEO of a major company and the advice he’s received along the way — some of which he gleaned from famous connections. For instance, he’s been known to text former U.S. Secretary of State Colin Powell for professional counsel, and he once benefited from advice casino king Steve Wynn gave him after the firm’s initial public offering in 2005.

“He said that I will be tested, tested with mediocrity. And that people will justify decisions to me and they will give every financial reason as to why I should do something,” Plank said. “But he said, you’re running your brand, know what you and your brand stand for.”

It’s no surprise, then, that Plank and his team have been methodically plotting how to translate the Under Amour name into top-notch footwear product.

He and his executives learned some harsh lessons about the sneaker space after their splashy, superhyped push into the non-cleated market in 2008 failed to connect with consumers. Plank openly acknowledged the product was not up to the company’s standards.

Since then, the firm has hired Dave Dombrow, now head of footwear design. It quietly opened a footwear and design center in Portland, Ore., in Nike Inc.’s backyard in the spring of 2013. (The center began with two workers and quickly swelled to 28; plans call for 50 employees there by the end of 2015.) Then in October, Under Armour promoted longtime staffer — and Plank’s first partner — Kip Fulks to president of product, in addition to his existing COO role. And in March of this year, the firm added former Mizuno and Nike executive Fritz Taylor to its ranks, charging him with the business side of all running footwear.

The manpower moves are paying off. Industry experts said Under Armour’s footwear is a far cry from where it began.

“The footwear has steadily developed its own Under Armour personality,” said Matt Powell, an analyst at SportsOneSource. “The shoes don’t look like other companies’ shoes, and their early shoes did. They were very derivative. Now they have their own design point of view and personality.”

Inside company headquarters (a former detergent factory that now houses about 1,300 employees), executives are most excited about the latest line of running footwear and its expanded use of SpeedForm technology.

After launching the $100 SpeedForm Apollo in February to much retail success, Under Armour is betting even bigger for spring ’15 with a broader collection. It will debut SpeedForm Gemini, a $130 shoe targeting the run-specialty channel. It also plans to follow up with another trainer called SpeedForm Apollo Vent.

Executives believe the SpeedForm products, which are made in a bra factory instead of a traditional footwear production facility, will differentiate the company from other brands — and, of course, boost total footwear sales, which are expected to hit $400 million this year, up from $300 million in 2013. The line has distinguishing traits such as a close fit and a seamless heel, and uses materials that enhance breathability.

The Gemini, in particular, features a cushioning system underfoot that allows the material to adapt based on how hard the runner strikes the ground.

To help tell the new product story, Under Armour will begin “a substantial marketing push” early next year. The campaign is expected to include a mix of TV, print and digital spots, as well as grassroots efforts at small running events and major marathons. Top brass said the firm will announce new race sponsorships in the coming weeks. (Under Armour typically spends 11 percent of revenues on marketing each year.)

The timing couldn’t be better, as participation in running events is on the rise.

According to a recent Running USA report, the number of people getting active in the sport has grown 70 percent in the last decade. The study revealed record numbers of female finishers and people completing half-marathons. What’s more, new types of races have also fueled interest in the sport, from Color Runs and Tough Mudder-like competitions to zombie races.

“While [Under Armour] is growing market share in running, it’s still the No. 6 brand. There are a lot of brands to get past to compete with Nike. The best category to do that in is running,” SportsOneSource’s Powell said. “[Choosing footwear] is a very personal decision for a runner. They take their decisions very seriously. That’s the category Under Armour ought to be pushing hard in. Let some of the other things go to the back burner — like basketball, where Nike has 95 percent of the market.”

Executives said they have the strategy right this round. And they have little doubt consumers will see the difference.

“When we launched our SpeedForm Apollo, we unlocked about 50 percent of the potential. We unlocked some cool new ways to manufacture shoes,” Fulks said. “But with Gemini, we took it to the next level. With the Gemini, we just learned more. We also hired more people with a wealth of knowledge on biomechanics, on engineering, industrial design, textiles. We didn’t have those people three years ago.”

“They’ve executed on strategy really well,” said Camilo Lyon, an analyst with Canaccord Genuity. “They have footwear from $70 to $130, and hit other increments up to that. And that matters. They can get into sporting goods, mid-tier retailers and now the specialty channel.”

Still, winning over consumers will be a hard slog.

While Plank is clearly up for the fight, it’s easy to see his frustration with the stigmas attached to his company long ago.

“We are constantly burdened by people saying, ‘Oh, no. They are the apparel guys. They don’t make shoes.’ I don’t know who made those rules of saying you’re an apparel brand or you’re a footwear brand,” the chairman and CEO said. “Everybody is generally making their things in generally the same places. But some are now differentiating, like with SpeedForm and using a bra factory. The unique thing is that when we go to a new market, we have the ability to reintroduce ourselves.”

To prove his point, Plank rattled off numbers as easily as football stats.

“We have to do a better job of retraining our traditional wholesale partners, who maybe said, ‘No, I tried your footwear three or four years ago,’” Plank said. “The company we were four years ago is so drastically different.”

One major difference: Under Armour entered the acquisitions game for the first time in its 18-year history.

Talking about his recent buy and sounding off on its potential, Plank got a glint in his eyes. He has lately been a crusader-in-chief for good health.

“You can pull up your bank balance on your phone, you can pull up stock prices, you can find out how much gas and oil your car needs. But when you see a doctor every 12 or 18 months, they pull out a manila folder, ask how you feel, and you’re thinking, the most valuable asset I have in life is my health and you have no data on it whatsoever other than when I was here last?” Plank said.

“We also believe obesity and health is a massive issue for the world. And the next big category is going to be proactive health and medicine. Right now we have no information about our bodies, unless you’re a diabetic drawing blood three times a day,” he added.

Plank and crew said they hope MapMyFitness will not only offer body analytics to users, but also provide the company with actionable insights.

For instance, of the 27 million registered app users — up from 20 million when Under Armour snagged it — the average person runs about 3.1 miles. To that end, company executives are discussing how to build the optimal shoe for that distance.

Additionally, top bosses have data on the times of day people run and the weather conditions they are most willing to head out in. The goal, they said, is to build product around that information.

“Running is the biggest place where you have to play as a company,” Plank said. “You have the most discerning consumer there who’s the most knowledgeable about footwear. If you can win there, you can win anywhere.”