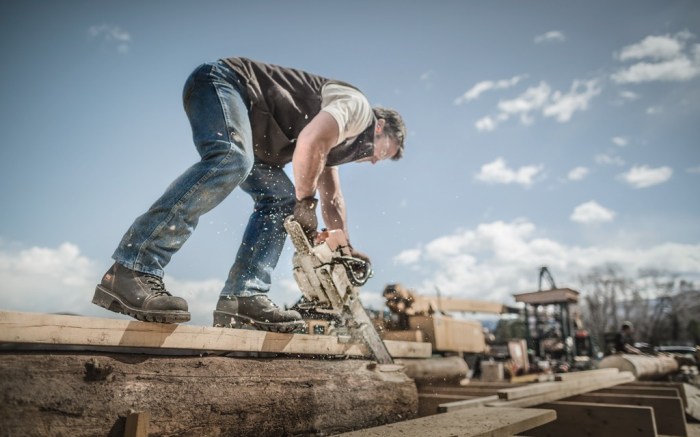 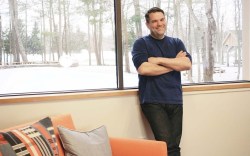 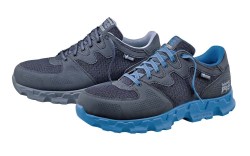 Less is proving to be more for Timberland Pro.

The Stratham, N.H.-based brand, which marks its 15th anniversary this year, has found consumers prefer classic product over trendy looks. “At the end of the day, most consumers want traditionally styled workboots,” said Xavier Kawula, senior product manager. “I haven’t seen a lot of heavily styled [product] have legs.”

At the VF Corp.-owned label, aesthetics are just part of the equation. “Performance, comfort and durability are driving the market today,” said Kawula.

For example, this fall the brand will launch Power Train, a collection with super-lightweight, anti-fatigue technology built into the outsole of the shoe, retailing for $100. According to Kawula, the material was originally developed in 2008 for midsoles, the result of a visit by the Timberland Pro team to a Harley Davidson plant. “In talking to the safety manager, [they learned] how anti-fatigue mats were a trip-and-fall hazard. [He said] he wished there was a way to put anti-fatigue [properties] right into the shoe.” As a result, the Power Train is meant to mimic the effect of standing on anti-fatigue mats, which help reduce musculoskeletal exhaustion in areas where workers stand for long periods.

New innovations have boosted Timberland Pro sales, which rose 10 percent in 2013 over the prior year, with a similar increase expected in 2104. (The work-focused division represents 10 percent of Timberland’s overall business, including sister lines Renova for health care workers, Valor for the duty market and Five Star for hospitality.)

According to Kawula, Timberland Pro’s biggest growth has come from higher-priced products. “We do best with consumers who see their jobs as careers,” said the executive, noting a sweet spot is the $130-to-$180 range. “We get the most brand loyalty from people who are not day laborers but carpenters and electricians. They’ve learned their lesson about using superior tools and consider their boots tools.”

Here, Kawula talks about capturing today’s young consumer, women in the workplace and keeping an eye on the competition.

Young people are being encouraged to join the trades. Have you seen this at Timberland Pro?
XK: [Recently], people have recalculated the financial benefit of going to a four-year university. Both men and women are looking at the trades as a viable long-term career. We haven’t seen it yet, but it has to happen. Coupled with this, an [uncertain] economy and tight job market have people with good-paying carpenter and electrician jobs in no hurry to retire. So while trades are becoming more attractive to young people, they’re also attractive to those currently in them.

Workboot consumers are extremely brand loyal. How is Timberland Pro marketing to young customers to secure them long term?
XK: There’s not one place to advertise anymore. You have to have a multidimensional strategy — outdoor, Web, TV and radio. We try to focus on [media] where people see an event live. We’ve had good success with hockey, such as the NHL Network, where ads are tagged by region. Guys talk about the event the next day at work. [However], both generationally and due to the type of work they do, young consumers are good BS-detectors. The best thing we can do is give them an honest picture of the product and not cut corners in delivering on it. If that means we have to be more expensive than other brands, we hope they feel they’re getting their dollar’s worth.

How important is the women’s category for Timberland Pro?
XK: The business is growing and represents about 8 percent to 10 percent of [sales]. However, it takes a long time to change directions. Over the past four years, I’ve seen more women in supervisory positions than ever before. We have a shoe called the Newbury, a women’s safety-toe clog in two SKUs — black and brown — that’s built for that customer. Maybe she’s an accountant or shift supervisor and has to cross that yellow line into the factory space where she needs a safety toe. She [also] needs a shoe that can be left at her desk to pop on when needed that looks good with her professional clothes.

Who are Timberland Pro’s key retail partners?
XK: It’s the independent industrial footwear stores such as Vanderbilt’s or IPP [Industrial Protection Products]. They drive both how we create product and how consumers validate us. We also have a retailer summit every year, when we bring in about 12 retailers from across the country to [our headquarters] to talk to us about how we do business. We also [sell to] e-commerce sites such as Amazon.com and Zappos.com.

What are today’s work customers looking for in terms of style?
XK: Most want traditional-looking boots in brown leather. Maybe they want a little [contrast] in their stitching. We’ve done more toe bumpers over the last year, starting with the Endurance PR, a heavy-duty puncture-resistant boot. It might be a little bit of Keen’s influence. It gives [boots] an outdoorsy feel, but also is an obvious way of adding durability.