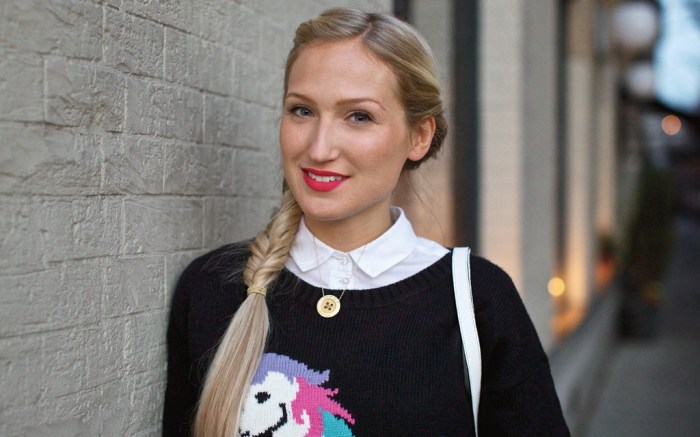 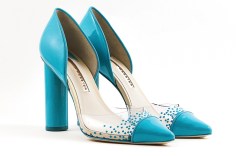 Sophia Webster is all about fun. She’s a bold dresser, pop culture fan and a person who loves to laugh. Her eponymous women’s footwear label reflects that sense of mirth with bright colors and unique silhouettes, from a sandal with pink flamingo motif and polka-dot heel to a bejeweled flat.

Capturing the things that bring her joy “happens organically,” said Webster, 28. “I am constantly designing things in my head, and it’s just a matter of when I get to sit down and sketch them out. I enjoy what I do.”

But for all her levity, the London-based designer is serious about building her business — and it shows. The Sophia Webster brand has had a speedy trajectory since it launched in spring ’13 with the help of mentor Nicholas Kirkwood. The made-in-Brazil footwear, retailing for $395 to $1,195, is in 33 countries and on shelves at major retailers including Nordstrom, Saks Fifth Avenue, Neiman Marcus and Bergdorf Goodman, as well as cutting-edge boutiques such as Colette in Paris and Matches in London. Webster has also debuted two hometown pop-up shops and several collaborations, including runway styles for Victoria’s Secret and an ongoing partnership with J.Crew.

The next few seasons will be busy, too. She plans to expand her handbag offering and grow her baby-shoe capsule collection, Sophia Webster Mini, into a full line of kids’ footwear. Webster also aims to bow her first flagship store, in London, in 2015.

Still, she’s not in a rush. “I don’t get drawn into what other people expect me to do,” she said, “but I put a lot of pressure on myself. I wouldn’t want to do this if I couldn’t do it the best I could. It’s just something innate in me.”

Here, Webster talks about making wild shoes wearable, grandma style and the time she fainted over a celebrity.

What inspired your fall footwear?
SW: My grandma is Czech — she was a refugee — so I was looking at Czech patterns, prints, folk art and trim. I designed a boot that had a lot of rickrack kind of trims and embroidery on it, in pastels like lilac and pink. It reminded me a little bit of Ski Barbie, but it also had a sort of Paris Hilton vibe about it. At the same time, it reminded me of a fairy tale princess. That’s when I started thinking I could do a sort of naughty, “Mean Girls”-inspired presentation [for London Fashion Week]. I found a way to merge those together. I created a Heartbreak Hotel [theme] with modern-day princesses, Beverly Hills kinds of brats who were waiting for Prince Charming to come and save them, but he didn’t come.

You’ve said Gwen Stefani has been a major style influence. What is it about her look that resonates with you?
SW: She has timeless style and we are similar in that it’s kind of girly-tomboy. She does that really well. She’s the queen of it. When I was growing up, I was obsessed with her. When I was about 14, I went to a No Doubt concert at Brixton Academy and I fainted. I woke up in an ambulance and I’d missed the whole thing. It was a bit overwhelming.

Why are you eager to expand the Sophia Webster Mini capsule into a full line?
SW: Last season I launched with some baby shoes that were handmade in London. They’ve [performed] quite well in sales, so we made some vulcanized styles, really fun high-tops and cute trainers [for fall ’14]. I used a lot of the same fabrics and leathers and bright colors that I used in my main collection. I’m pregnant as well, due in July. I found out at Christmas, so I have babies on the brain.

What have your pop-up shops taught you about retailing?
SW: It’s always interesting to learn more about my customers and the type of women who are buying the shoes. That’s the great thing about having a store. We get insight into that which we normally wouldn’t get. We have a huge cross-section of women who buy the shoes. I find that fascinating. It’s definitely not just one type of woman or age group.

How are you able to cater to all of them?
SW: As I’ve developed the range more, I’ve offered different heel heights and not necessarily more muted colorways but things that are easier to wear. [The styles] still have the same sort of energy I like to have in my designs. On one end, there might be a really crazy shoe with all different colors and prints and beads hanging off, but there also will be a pump in the same story that has that detail in the back. It has the same feeling, but it’s not as attention-seeking.