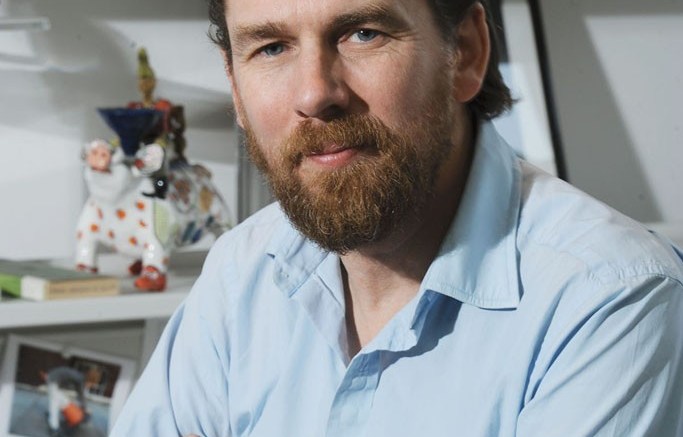 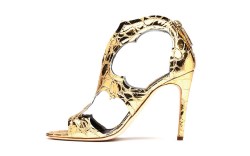 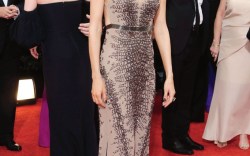 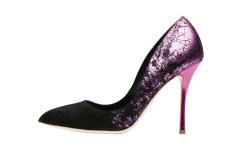 For Rupert Sanderson, simplicity and success go hand in hand.

The soft-spoken designer keeps his footwear silhouettes understated and his London-based brand’s growth measured. “Revolution is not in the air,” he said regarding next steps for his 13-year-old eponymous luxury women’s label. “It’s very much about building on what we have been doing.”

But brand building has meant breaking plenty of new ground, too. Sanderson recently debuted a holiday collaboration with Antonio Berardi, available exclusively at Net-a-porter.com. The collection consists of sexy pumps and sandals, and will continue into spring and fall ’14.

In addition, the designer is prepping for a London Fashion Week project with U.K. retailer Joseph.

Sanderson’s main line of sleek flats, heels, sneakers and boots, priced from $595 to $1,795, is available globally. The label’s biggest market is in Europe, and it is sold in the U.S. at Neiman Marcus, Nordstrom, Barneys New York, Bloomingdale’s and Saks Fifth Avenue. Growth in Asia is a focus going forward, according to Sanderson, who plans to bow more branded boutiques on the continent by the end of the year. (He currently has two stores in Asia, both located in Hong Kong).

The designer also is enjoying increased attention from celebrities, including Julia Roberts, Elisabeth Moss and Sarah Hyland, who all wore his looks on the red carpet during this year’s awards season. Other notable fans include Kate Middleton and Jessica Alba.

“When you get a really good placement, it’s exciting, but you can’t look at it in the short term,” Sanderson said. “It’s about being in it for the long term and doing things [to target celebrities] every year. It takes time to nail down what works. We have a review at the end of February, and it is always interesting to see how it happened, who are the stylists we work with best. From there we work out how to go forward. There’s a rhythm to it, which is great.”

Here, Sanderson reveals his latest influences, why he’s so picky about collaborators and the secret to his easygoing outlook.

What is inspiring your design work right now?
RS: I like the fact that things have calmed down a bit, and it feels like people are reacting more to simplicity. One of the styles coming through for fall ’14 is a pointed flat. Americans call it a skimmer. The last is something I have worked on for a long time, but [for fall I have done] a slight variation using fluorescent vinyl. These sorts of things — that tightness of silhouette, that slightly 1950s [look] and a modernist feel rather than being overpowering — are so understated, yet when people get it, it’s great. [Platforms] still have a place, and when that cycle was en vogue, it was great fun working on it, but what’s inspiring me at the moment is going back to [the idea that] less is more.

What are the most dramatic ways the market has changed over the last decade?
RS: The four seasons have become really established. Whereas resort and cruise were very much American [constructs], now they are becoming equally important [internationally]. E-commerce has revolutionized things. Everything is so much faster. Sales start earlier, they’re shorter and there’s a real need for new merchandise quickly. Specials, exclusives, collaborations — it’s about newness.

Speaking of collaborations, what’s the secret to a successful design partnership?
RS: You’ve got to work with people with whom you genuinely share some sort of design aesthetic, so the conversation is two people speaking the same language. You can’t just say, “Eh, they’re famous, so we’ll make a shoe,” or “They’re big and we’re small.” It never works like that because it’s a very one-sided arrangement. If it’s just a marketing exercise, I glaze over quickly. The trick to collaborating is actually collaborating.

What is your most formidable challenge right now?
RS: I want to be in America a lot more. It’s still the biggest market in the world. [Americans] consume and understand brands and fashion, and they love great shoes. I would love to be able to have a [bigger] department store business [in the U.S.]. We are getting there, which is good. When I first started, I got into Neiman Marcus rather quickly. I was, quite frankly, unprepared for it. It was too early. But now we are very well set and we’ve got great support on both coasts. We are constantly looking for the timing to step over and open a [branded] store and e-commerce in the States.

Why have you stuck to a modest growth plan versus more rapid expansion?
RS: My trajectory has been more consistent, and I’m much happier for it because it has allowed me to keep control of things. I’m lucky enough to own a factory in Italy. It’s an old-fashioned Italian way of doing business. I used to work for [a family-oriented firm], so that formed me as to how you run a shoe business. Basically, we’ve replicated that. It’s factory-based with a greater belief in the core art of shoemaking. That’s what I believe in most passionately.