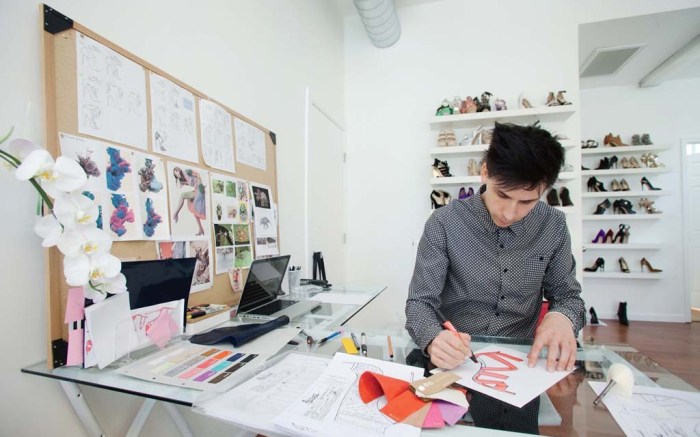 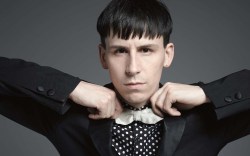 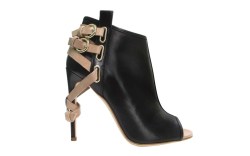 Since launching his business in 2008, Jerome Rousseau has attracted many famous fans.

The 2014 awards season hasn’t been much different, with Lucy Hale, Elisabeth Moss and Olivia Munn wearing his shoes and bags on the red carpet so far.

Sure, free press helps, but to expand the Los Angeles-based brand’s reach in a big way, Rousseau decided he needed to do more.

To that end, he signed on with Massimo Bonini Showroom for the international business and added resort and pre-fall lines to his eponymous label this year.

And the designer is slated to unveil a shoe collaboration with Lela Rose at her runway show during New York Fashion Week this month. The Jerome C. Rousseau x Lela Rose footwear — new takes on his signature booties and heels — will retail for $595 to $895 at high-end department stores and Lela Rose’s Dallas boutique this fall.

Rose said the two creative minds meshed well. “I like that [Jerome] incorporates whimsical and feminine details into his collection, which I felt complemented my clothing. He adds a dash of personality, which every accessory needs,” she said.

Rousseau, whose business grew about 50 percent last year, also has been busy crafting his own line for the season.

“It’s fun, flirty and playful,” he said of the shoes, which include updates to several popular silhouettes, as well as two new constructions featuring a sculptural, flared heel. Jerome C. Rousseau footwear, priced from $595 to $1,585, is carried worldwide by retailers such as Saks Fifth Avenue, Bloomingdale’s and Harvey Nichols, as well as high-end boutiques.

With so much on his plate, Rousseau barely has time for breaks, but when he does get away, he heads straight for the music store. “I love buying records,” said the designer, who infuses his passion into his footwear. “Just this month I probably bought 50 new ones. I love going to [well-stocked] stores or just going through a lot of bad records in $1 bins to find three gems.”

Up next, the designer is planning personal appearances at key department stores and boutiques across the U.S., in his native Canada and other countries. “Spending more face-to-face time with the customers is important,” he said.

Here, Rousseau discusses what it’s like to collaborate, why he’s a fan of Cyndi Lauper and where he goes to get his groove on.

How did the collaboration with Lela Rose come about?
JR: Her brand is feminine and it’s always elegant. There’s a great play of color, material and texture, which is also key to my collection. The brands are like-minded in that sense. Lela Rose is also carried at great retailers and some are retailers that [don’t currently carry Jerome C. Rousseau], so that was an exciting opportunity. The collaboration could not have been easier. It was seamless and fun.

What was the inspiration for your main fall ’14 collection?
JR: Music is always a big inspiration for me. It’s something that’s in my [life] every day right now. [Bryan Rabin and Adam XII’s Giorgio’s] dance night [in Los Angeles reminds me] of when I was younger in London and used to go to a specific dance night just because they would play one song I loved. I would wait four hours for that song to come on. [Los Angeles] dance nights bring me back to that sort of emotion and beautiful energy you get at any age when you love a song. I’ve been shaking my ass to that music.

What’s the hardest part of your job?
JR: One of the biggest challenges is the workload. Before starting my business, I designed for various labels for 10 years, but running a business is a whole new venture. Designing a collection becomes part of what you do, although you probably spend the same amount of time doing it as you would in a [second] job, at nighttime and in your spare time. You spend the weekdays running your business. There’s not a moment in the year where I’m not either showing a collection or traveling to develop the next one. But it’s not work I’m unhappy to do. I’m very lucky that I’m passionate about my work.

Several stars recently wore your label at the SAG Awards, Golden Globes and other events. Did that help your visibility?
JR: It has been a pretty exceptional three weeks, and I’ve been massively excited about it. [Celebrity placement] definitely creates a lot of enthusiasm, and you can see it on social media right away, on Twitter, Facebook and even Instagram. What it does is engage the customer — someone who perhaps already knows and wears the label, or who may be discovering it through someone like Laura Carmichael on the red carpet [at the SAG Awards and Golden Globes].

What celebrity would you like to see wear Jerome C. Rousseau who hasn’t yet?
JR: The one I keep talking about is Cyndi Lauper. She’s fantastic. I loved her as a child, but also as an adult because today she is fighting for causes that are very close to me, [such as] gay equality. There’s also the breadth of talent: The woman won a Grammy for Best New Artist in the 1980s, an Emmy [for Outstanding Guest Actress in a Comedy Series] in the 1990s and she just won a Tony Award for Best Original Score for “Kinky Boots.” That’s three different fields. She’s a solid woman with solid talent who never fails to inspire me.