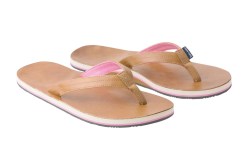 It’s been a banner start for Hari Mari, the Dallas-based flip-flop brand founded by husband-and-wife team Jeremy and Lila Stewart. Since launching in 2012, the company has staked its name on high-end product offering premium comfort with amped-up style — a combination that has successfully wooed retailers around the country, including national chains like Urban Outfitters and Jack Spade.

The founders’ early success is particularly notable because they are newcomers to the footwear industry. They were inspired to reconsider their career paths in this direction after a job opportunity took the couple to Jakarta, Indonesia, for three years, and they saw the extreme hardship faced by children in the region.

“We knew we couldn’t jump back into corporate America after the experience we had in Asia,” Lila Stewart explained. After returning to Texas in 2010, they began planning a company that would benefit kids in their home country.

“We found that pediatric cancer is the most fatal disease for children in the U.S., and that sealed the deal for the philanthropic part of our business,” she said.

Like Toms Shoes, Hari Mari makes charitable outreach a cornerstone of its brand identity. The flip-flops are priced around $60 to $80, and for every pair sold, the company donates $3 to support kids battling pediatric cancer.

Here, Lila Stewart, who manages sales and PR for the brand (her husband heads operations and manufacturing), delves into the firm’s approach to product, marketing and giving back.

Hari Mari has grown tremendously in only two years. To what do you credit your success?
LS: Our growth can be attributed to customers wanting something new and fresh in what was a stagnant flip-flop market. They responded to a brand that’s made responsibly, gives back, is good-looking and comfortable. We’ve got a lot of selling points, and we really run the gamut in terms of who we can sell to. Our brand can do outdoor, surf, fashion-forward accounts. We’ve been picked up by running stores primarily because of the comfort level in our patented toe post.

The brand is outspoken about its mission to fight pediatric cancer. How are you making an impact?
LS: We have a large presence here in Texas, so we support families who can’t afford treatment for their children at the Cook Children’s Hospital in Fort Worth and Dell Children’s Medical Center in Austin. As we grow and become more nationally known, we will absolutely open up more hospital relationships in different pockets of the country. We want the donations to be local to where our customers live. But we’ve found that when you say how much you donate as a whole, [people say] it’s either too much or too little, so we’ve decided to keep that information internal. However at the end of the year, all our retail accounts receive dollar amount totals of how much their store contributed to our Flops Fighting Cancer initiative.

You launched Hari Mari without any experience in the footwear business. What have been some initial challenges?
LS: It’s been hard to estimate how many pairs of shoes we need to produce. Many accounts hear about us in the middle of a season and want to place an ASAP order. You never know who is going to come on board and when. Currently we’re out of a lot of our leather line because Urban Outfitters wiped out a big chunk of our inventory. It will be nice once we have several more years under our belt and can better estimate what we need. But for now, it’s just a guessing game.

Your marketing has a very distinctive look. What is the inspiration behind the aesthetic?
LS: We felt like no one [in the category] was speaking to Middle America. If you look at the larger established flip-flop brands, they have surf or beach aesthetics, but people who’ve never even been to a beach are wearing flip-flops, and in warmer climates they are wearing them year-round. So we really wanted to focus on urban settings and be a little more realistic in our marketing and the way we convey the brand.

How are you approaching future growth?
LS: Our first goal is to become a top-of-mind national flip-flop brand. Most people in America still don’t know about Hari Mari, and we’d like to change that. For spring ’15, we are rolling out a whole new line called Dunes. It’s at a lower price point of $45 — all rubber, very sporty, but also fashion-forward. We plan on doing a kids’ line in 2016, and eventually we’ll introduce closed-toe shoes and maybe some apparel to support the brand. For every pair of footwear that we sell, we will always give back to pediatric cancer.