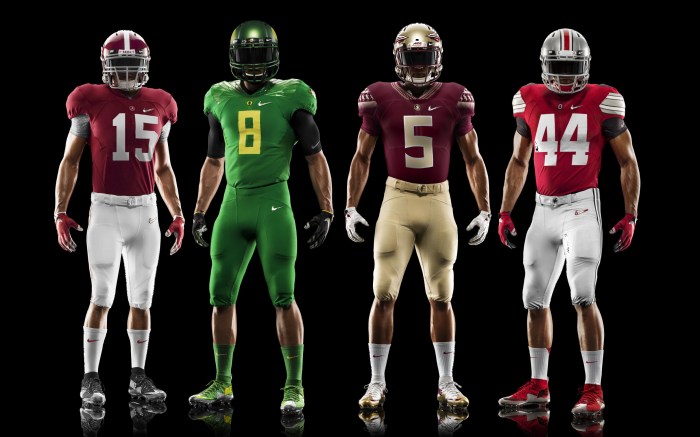 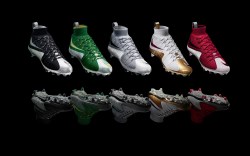 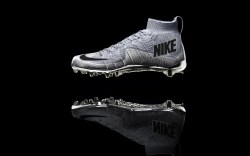 On New Year’s Day, the first-ever College Football Playoff will get underway, and Nike will be right in the center of the action.

In honor of the sports milestone, the Swoosh designed custom uniforms and footwear for each of the four teams — Alabama, Oregon, Florida State and Ohio State — that will duke it out for the coveted national championship title.

On their feet, they’ll sport Nike’s new Vapor Untouchable cleats. The brand reportedly went through more than 70 iterations of the shoe before it was satisfied with the final design, which features an ultra-lightweight Flyknit upper made with recycled polyester yarn. A protective Nike Skin overlay works with the Flyknit to increase protection and durability, while a Carbon V-Plate enhances propulsion.

“The Vapor Untouchable pushes the limits of speed on the field and leverages the power of sustainable innovation to reduce environmental impact off the field,” explained Ken Link, design director for Nike. “Athletes have told us this cleat feels like an extension of the foot, allowing them the speed they need, with freedom of movement unlike anything else they’ve tried.”

Fans will see the shoes in action beginning at 5 p.m. ET on Jan. 1, when Florida State squares off against Oregon in the first semifinal game in Pasadena, Calif. At 8:30 p.m., Alabama and Ohio State will take to the field in New Orleans for the second matchup. The winners of both games will advance to the national championship, scheduled for Jan. 12.

Consumers can purchase their own official Playoff gear at Nike.com, Nike stores, as well as other key retailers. Cleats are priced at $200 and team jerseys at $150.

Here, a sneak peek at the bold Nike looks the players will be showing off on game day: