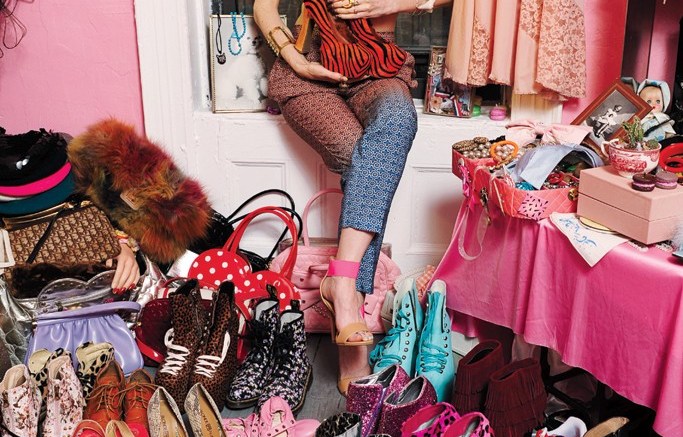 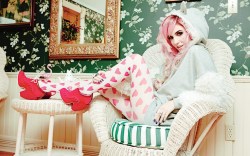 With her signature pink hair and penchant for sparkles, flower headbands and bold, quirky ensembles, Audrey Kitching clearly has a wild side. But the model, fashion blogger and designer is pragmatic when it comes to shoes.

“I like to dress up, but I also like to be able to run errands in the same outfit,” said Kitching, who divides her time between New York and Los Angeles and maintains well-stocked shoe closets in both cities. “I like to wear heels that are comfortable and mix street style with a casual daily life.”

The Philadelphia-born 27-year-old has two apparel lines and a jewelry collection, and in the past few seasons has become more visible on the footwear scene. For fall ’12, Irregular Choice named Kitching the face of the brand, and she served as art director, stylist and model for that season’s lookbook, which was shot in Kitching’s hometown.

She also modeled for emerging shoe designer Kerol D. last year and recently was hired as a designer for the Milan-based label. “I’m creating a 12-piece collection [for fall ’14],” Kitching said, noting her Kerol D. styles will be available in the U.S. and that the gig is likely permanent. “There will be a really chunky-heeled boot and a high heel. They are giving me free rein, so I’m a bit overwhelmed because there are so many choices.”

The multitasker also is adding published author to her resume. Her style guide, “Budget Fashionista,” which she is self-publishing, hits shelves this fall. “It teaches how you can have a designer wardrobe without [breaking the bank],” Kitching said.

Her own closets are a testament to that ideal, as Footwear News discovered when Kitching opened the doors to her New York abode and shared a glimpse of her wallet-friendly shoe collection.

Early shoe memories: “When ‘Sex & the City’ first came out, I was too young to understand it and get into it, but then [in my late teens] I started watching the reruns and DVDs and it made me become obsessed with shoes.”

Most beloved labels: “I really like Dolce Vita because they are comfortable. And Jeffrey Campbell is great for the super on-trend, crazy stuff. I like Irregular Choice as well because they’re wild. I have a few pairs of Elizabeth & James shoes, which are really comfortable. Then I have Vans and Chucks for hiking and exercise.”

Most frequently worn shoes: “I have a pair of House of Harlow 1960 moccasins that are rainbow beaded and kind of my slip-on, run-and-get-takeout shoes. As far as heels, my most worn would be a pair of Jeffrey Campbell leather lace-up boots with wood heels.”

Oldest pair: “Nike shoes that a Scottish designer named Pauline Clifford made for me about seven years ago. She hand-crystallized the entire shoe and I hardly wear them. I’m scared that the Swarovski crystals will come off, and they are in perfect condition. I wore them once for a photo shoot.”

Highest heel: “A lace-up boot by Unif with a 6.5-inch heel. I knew they were the highest, but I had to measure them [to be sure].”

Biggest footwear splurge: “Three years ago, when the Prada ‘chandelier’ shoes came out, I got them on clearance for like $400. It wasn’t bad compared to the original price.”

Most regrettable pairs: “Those are the shoes I consider ‘photo-shoot shoes.’ I buy a lot of shoes online so I don’t really get to try them on. Some look great online and then they get here and they are so painful or hard to walk in.”

Wildest style: “I have this Irregular Choice pair where the actual heel is a diamond shape. It comes down to a little point but [above that is] a huge triangle. They’re pretty crazy, and every time I wear them, people are like, ‘How are you walking?’”

Technique for locating hard-to-find brands: “I’m a crazy Google person. I will Google something for hours until I find it. If you really want to find something and you search for it, you’ll find it.”

Best tip for shopping on a budget: “At the end of every season, like mid-summer, big online shoe stores put all their stuff on sale because they want to bring in that fall inventory. Wait until the middle of July to buy some of your summer shoes, and you are going to get them for 60 percent off.”

Favorite footwear moment from a film: “The movie ‘Confessions of a Shopaholic’ stands out for me, when [main character Rebecca Bloomwood] is putting her credit card in the freezer in a cup of water so she can’t go buy shoes.”