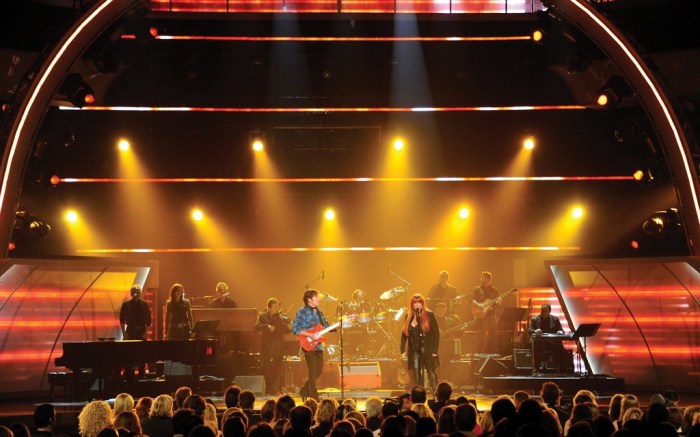 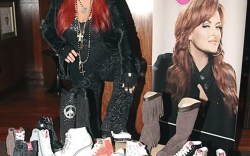 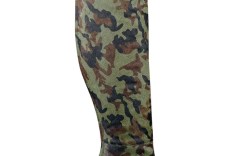 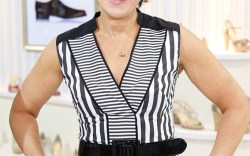 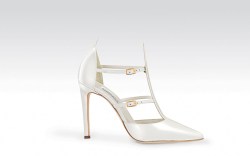 Wynonna’s Shoe Stories
Wynonna Judd can’t live without her BeDazzled sneaker wedges. The country star unveiled her latest project, a women’s footwear line called Got Soul, at FN Platform, where she also took time to sign autographs and chat up fans. The singer said the inspiration for the collection — sneaker wedges, boots and flats sporting bright sequins, metallics and neons, and slated to hit retail for spring ’14 — was a shoe she had decorated for a recent performance.

“I’m on stage, and I hear from the audience, ‘Oh my god, your shoes,’” Judd told Spy, kicking up her foot to show off the black-and-white, rhinestone-encrusted sneaker that started it all. “[Fans kept saying] the same thing at meet-and-greets. All of a sudden, it was like, ‘bling!’ literally and figuratively. Every woman needs to feel sparkly at some point.” And Judd is serious when it comes to spreading the gospel of bling. “I gave Rosie O’Donnell a BeDazzler,” the musician revealed. She also shared a few secrets about her own closet and her gifting plans for Got Soul.

What made you get into the footwear business?
“It wasn’t a marketing or I-need-to-make-money thing. I’ve been offered liquor [endorsement] deals and weight-loss deals, but no, it’s got to be something that’s me. I wear [fashion sneakers] every night on stage for my two-hour show, so it started authentically, and I’m really proud of that. It’s a very personal love affair with the fans.”

Is your off-stage wardrobe just as sparkly?
“Yes. I have a glue gun in a drawer, and I also have a girl in Nashville, Tenn., who has been working with me for almost 30 years. I’ll send her a T-shirt that has, say, Johnny Cash, on it, and I’ll say, ‘bling out the J and the C,’ and she does it. I also had these pants [I’m wearing] done. Every stone is put on by hand. This is Nashville, baby.”

To the Nines
Punk rock is in at Nine West. The brand has a new collaboration up its sleeve with Decades owner Cameron Silver and Nine West contributing style director Kate Ciepluch, for a collection inspired by 1980s punk, of course. “We wanted to do pumps in a downtown, cool girl way. [Cameron] and I got to talking about the whole punk thing that’s going on in fashion and saw an image of a beautiful woman in the subway [on Canal Street] in this Grecian gown and we were like, what is on her feet? We want to design that,” said Ciepluch. A line of limited-edition styles followed, including d’Orsay flats, classic and scalloped pumps, slouchy booties and over-the-knee boots featuring iconic punk trends such as neon accents and camouflage calf hair. Fashion model and blogger Alexandra Spencer is the face of the campaign. “She’s our girl. She’s not only a fashion lover, blogger and model, there’s a personality. She has responded to the little scenarios we put together. The look is effortless,” said Silver. “[The collection] is edgy, sexy, chic, downtown and effortless.” The Cameron Silver for Nine West collection will retail for $69 to $299 online and in stores in October.

Kenneth’s Corner
Straight from Sin City, Kenneth Cole was jetting off to India to scout out the retail scene and potential store locations. The designer, who will present his spring ’14 collection during New York Fashion Week on Sept. 7, said his travel schedule is not slowing down anytime soon. He plans to host an AmfAR event in Italy later this month and in Rio de Janeiro in October.

Fashion First
Ralph Lauren will have a new fan in his audience during fashion week. Yeardley Smith, the designer behind Marchez Vous, will attend the style veteran’s show on Sept. 12. “He’s one of my favorite designers, so I’m really excited,” she said. And Smith already has a few lines prepped in case she gets to meet Lauren. What would she say? “I have a closet full of your clothes, I’ve been shopping your line forever and your [designs are beautiful],” said Smith.

On the Catwalk
Are you runway ready? Gio Metodiev is. The man behind the Gio Diev shoe line has paired up with edgy ready-to-wear designer Sally LaPointe for his New York Fashion Week debut. For the project, Metodiev was sure to maintain LaPointe’s signature style, so all Gio Diev creations are single sole, featuring color palettes such as rosegold mirrored leather, black-matte python and stone gray patent. “A strong, sexy look also is captured by the use of various width straps, curved openings and sharp edges,” said Metodiev. “I strived to create exquisite styles that are perfectly finished, just like a rose, but that still carry those hard elements, like thorns on a stem.” And there’s one big name Metodiev hopes to see front row. “Lady Gaga wears Sally’s pieces, so it will be a thrill to see her attending the show and hopefully becoming a fan of [my brand].”

Spotted…
Swizz Beatz with a pair of Jay Adoni shoes. The hip-hop artist was on hand in Las Vegas and stopped by the Adoni Group booth, where the company head was waiting with a special pair of platform pumps (adorned with gold roses and some bling) that Adoni had crafted for Beatz’s wife, Alicia Keys. Spy will be searching for the look on stage.