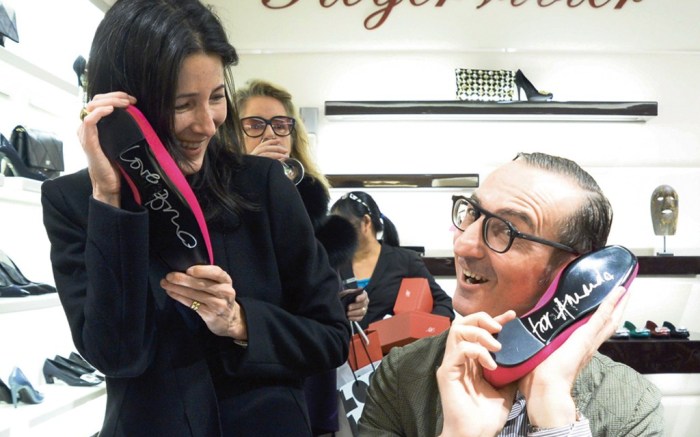 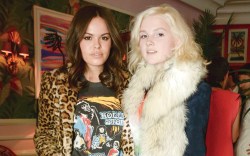 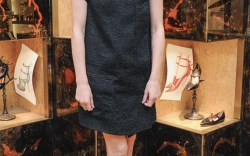 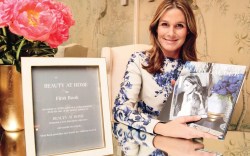 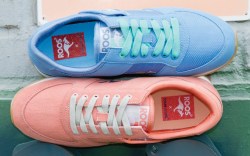 Comma Rules
Bruno Frisoni conquered the concrete jungle. The creative director of Roger Vivier had plenty of Manhattan moments last week to celebrate the reissue of the label’s Virgule style — that curvy comma pump. And hot off the heels of a recent brand retrospective in Paris, Vivier took a forward leap with a new campaign for the revamped shoes, shot by buzzy 19-year-old Brooklynite Olivia Bee and featuring model/DJ Atlanta de Cadenet. Frisoni and Diego Della Valle swooped into town to celebrate the shoe’s new lease on life, at Paul’s Baby Grand in Tribeca. Additionally, other personalities made appearances, including Courtney Love, Annabelle Dexter-Jones, Tali Lennox, Micol Sabbadini and Nicky Hilton. Earlier in the week, Frisoni also spent some time at Saks Fifth Avenue, where he signed shoes and greeted customers — among them, actress Kelly Rutherford. Here, the designer talks about the relaunch and his empire state of mind.

Why now for the Virgule revival?
“In the process of working on the Roger Vivier book, [released by Rizzoli earlier this year], going through the archives and working on the exhibition, I was again faced with this very famous heel. It’s fun, feminine and could be ladylike, too, but in a [fresh] way. The silhouette is the key thing in shoes.”

How did you choose to work with Bee and Cadenet?
“We wanted to have these two girls working together. Having Olivia and some cool girl like Atlanta, [Duran Duran guitarist] John Taylor’s daughter, playing together brings a younger attitude to the brand.”

So where are you jetting off to next?
“Asia, Singapore, Tokyo and Lebanon. So many trips! It’s a great moment for Roger Vivier. I’m like a suitcase myself. It’s always good to travel.”

Autograph Please
Armed with a Sharpie and a stack of her footwear sketches, Tabitha Simmons knows how to please fans and loyal customers. The designer (sporting her spring ’14 Heather oxblood pumps and Dolce & Gabbana chandelier earrings) signed shoe prints at a recent Bergdorf Goodman event. “I view them as a work in progress,” she said of the charming drawings, which drew label loyalists and friends such as Vogue’s Marina Rust and creative consultant Patricia Herrera Lansing. She also brought along a selection of colorful styles from her resort ’13 collection, dreamed up during a recent trip to South America. “The prints were inspired by Peru. I wanted to capture my travels abroad,” Simmons said. But even though far-flung destinations are an important part of the creative process, the designer was happy to be in New York, standing in the very store that initially spotted her potential. “Bergdorf feels so special to me because it was the first to pick me up,” she said.

Lauder Living
Did Aerin Lauder celebrate Christmas in July? The founder and creative director of lifestyle brand Aerin has launched a new book, “Beauty at Home,” which meant, in some cases, re-creating scenes from her house and design taste. “I loved shooting the stories. We were shooting holiday in the middle of summer,” said Lauder, whose footwear collection makes an appearance, too. “We shot the closets and the shoes.” As for her namesake shoe collection with Jimlar Corp., the designer is now showing the spring line, which she described as both feminine and modern. “We always turn to different things for inspiration, from museums to art and fashion,” Lauder said while at Bergdorf Goodman for her book launch last Wednesday. And though earlier in the day she was wearing her own wedge boot, for the party Lauder transitioned into classic black Manolo Blahnik pumps. “He’s another very good friend of mine,” she said.

DJ Booth
Shane and Shawn Ward are moving to the music. A new song, created by hip-hop artists Cage and D Boog , hits today and pays homage to the Roos designers and their footwear. “The Revival” track, released on iTunes and through the brand’s social media, is part of the Wards’ Revival DJ Initiative, a new marketing program that has them partnering with more than 20 DJs for social media campaigns and events. “We are a lifestyle brand and music is all about a lifestyle,” said Shawn Ward. So what music is he jamming too now? “I’m a 1970s guy, so I like Elton John and Led Zeppelin,” said Ward, who also has a taste for current chart toppers. “We always have music on. I like Pharrell, Jay-Z and The Black Keys.”

The 30-Year Marc
Happy 30th anniversary to Marc Jacobs and Robert Duffy. Jacobs and his business partner are gearing up to celebrate their 30th year of working together in March, and the upcoming milestone is giving the duo a chance to reflect on three decades of collaboration. “We can finish each other’s sentences and we know what the other one is thinking,” Duffy told Spy at a recent fashion event. “Sometimes that’s good and sometimes it’s bad.” That’s not to say there aren’t still surprises along the way. “As far as creativity, I never know what to expect from [Marc],” Duffy said. “That never changes.” And do they still get along after all this time? “Every six months we’ll have a disagreement,” he revealed. “We argue about silly things, but not very often.”