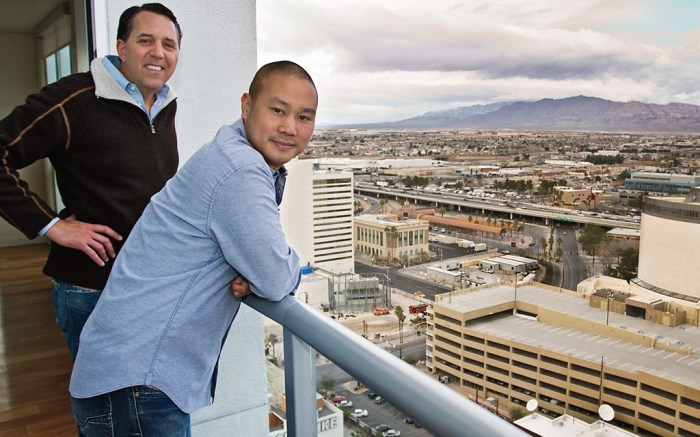 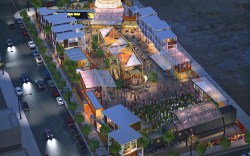 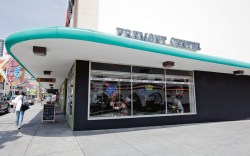 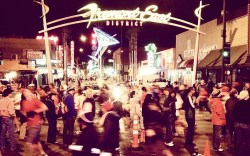 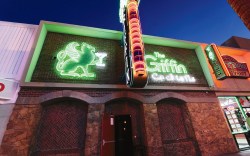 A year ago, the walls of Tony Hsieh’s apartment overlooking downtown Las Vegas were plastered in Post-it notes and maps of the area as he began to brainstorm what the city’s Fremont East neighborhood could become with the proper attention and investment.

Now those plans are coming to fruition, and over the next six months the district will see rapid development. Already, new businesses have opened, construction projects have broken ground, tech firms have relocated — and that’s just a hint of what’s to come.

“Now that the land acquisition part of it is mostly done, we’re focusing more on building stuff or renovating space,” said Hsieh, CEO of Zappos.com and founder of the Downtown Project, a $350 million community investment fund he has bankrolled to help transform the downtown area of Las Vegas into a vibrant, community-focused place to work and live.

“In 2013, we will make monumental strides [in the development of the downtown area] simply because a lot of the infrastructure we’ve been planning for the last 12 months will finally start coming online this year,” said Fred Mossler, Zappos’ head of merchandising who is also an investor in the Downtown Project and serves as a strategist and mentor. “That’s only going to increase the energy level and activity downtown.”

A major part of the plan is the relocation of Zappos’ corporate offices to the Fremont East neighborhood, in the former City Hall building. While the company’s formal move of its roughly 1,500 employees won’t occur until September, several projects are already off the ground, thanks to funding and support from the Downtown Project.

For example, in October, chef Natalie Young opened downtown restaurant Eat, and the lifelong aspiration has already turned into a profitable reality.

“Natalie had worked as a chef at The Hard Rock Casino for 10 years, working in the 24/7 Café,” Hsieh said. “She was about to leave town and move to Santa Fe, N.M., when I met her. I ran into her in a coffee shop and basically through a serendipitous interaction, we started talking. It turned out her lifelong dream was to open her own breakfast-and-lunch place. That has been open for a few months and is doing close to double their original projections [for business].”

And in January, Stitch Factory, a co-working fashion space, opened its doors. The facility gives fledgling designers access to machinery and materials that otherwise might be cost-prohibitive. It also offers community classes on fashion design, pattern-making and sewing.

Mossler said the Stitch Factory could be the seed that helps the area blossom into a full-fledged garment district, and talks are under way with potential business partners to bring apparel manufacturing to the area.

Hsieh also has been in discussions with companies interested in manufacturing footwear in the area. “We’re still finalizing things, but hopefully we can announce that in the next month or two,” he said.

Adding to the downtown fashion scene is Coterie, a men’s and women’s clothing boutique that opened this past fall.

Owner Sarah Nisperos said she wanted to offer designer fashion in downtown as a way to make a statement about the revival of the neighborhood.

“I opened Coterie here because I wanted to use my skill set to help the good guys,” she said. “Opening a retail store that has new clothes instead of the expected downtown vintage product speaks to the evolution of our revitalization. My store also provides another daytime hangout within the community, which is something we also need. My hope is that Coterie becomes a major platform for serendipitous collisions.”

Nisperos said she only stocks a small amount of women’s shoes, though she often helps clients find matching footwear on the Zappos website. “We’ll sit with them and help them through their order,” she said.

A few blocks away, Shipping Container Park — an outdoor shopping area where 40 businesses, ranging from restaurants and specialty food shops to retail stores — will inhabit low-cost space, is under construction and slated to open in July.

“We look at [the park] as a place to incubate businesses,” Mossler said. “It will give entrepreneurs the chance to have a small space. They don’t need to sign a lease for five years and make a bunch of capital improvements. They’ll be able to test out their concept and, if it works, we’ll be able to provide them with a larger space somewhere downtown.”

At the center of the park is a play area for children. On the dome covering the space, a 3-D scene will be projected, while an outdoor stage is set to host a variety of music and entertainment events.

Mossler said that while the park is sure to attract tourists, it was created with area residents in mind and not out-of-towners. “The goal is to build it for the local community,” he said.

Also under construction is the Inspire Theatre, a 150-seat facility designed to showcase speakers discussing a range of topics. “It’s all about the idea that visiting downtown will make you smarter,” Mossler said, adding that the space will also include a coffee shop and a rooftop bar.

Though the theater is still being built, the speaking series is under way, currently housed in construction trailers. Already, the program has attracted such high-profile speakers as documentary filmmaker Morgan Spurlock and AOL co-founder Steve Case.

A second theater is in development in the Ogden Apartment building, where Hsieh, Mossler and several other Zappos and Downtown Project executives live. It is tentatively called The Ogden Theatre. “That will be a smaller version of the Inspire Theatre,” Hsieh said. “We want to have multiple speaking facilities because we have so many people coming through. And at night, we can [use the space for] small bands to perform or show independent movies.”

A private school — called 9th Bridge — is also in the works and is slated to debut in August. “We’re building an early childhood center [for] ages 6 weeks to kindergarten,” said Connie Yeh, head of Downtown Project’s $50 million education fund. “We will have infant, toddler and mixed-aged, pre-K/kindergarten classes.”

Each year, grades will be added until the school becomes a full K-12 institution. “We want to teach kids about creativity and entrepreneurship as well as [traditional schoolwork],” Hsieh said.

In addition, a medical center is expected to open later this year, and Hsieh said it could have big implications not only for local residents but for the medical community as a whole. “It’s going to change the whole health care model,” he said. “It’s a model focused on wellness as well as health.”

The Downtown Project also has invested in and relocated 15 tech firms to the area. Among the newcomers are Romotive, a company that builds robots that can be controlled by smartphones, and Ecomom, an e-tailer specializing in kid-friendly products.

In all, Steven Hill, Zappos’ VP of merchandising, who serves as a liaison between Zappos and the Downtown Project, said the various tech companies that have relocated to downtown employ about 100 people, adding to the creative environment of the area.

And this October, the city will see the debut of a 15-block music and culinary arts festival called “Life Is Beautiful.”

“We’re basically fencing off 15 blocks, which has never really been done before in any city,” Hsieh said.

“It will be a great thing for the community,” Mossler added. “It will be a music, culinary, speaker and fashion festival — all in downtown Las Vegas and all happening simultaneously.”

Also in the pipeline are several new restaurants, a film production studio and shared car and bike programs, plus more.

Hsieh said he’s now completed the first year of a five-year development plan for the neighborhood. After that, he anticipates the area will continue to develop, but will take on a life of its own. “In five years, this will be a very, very different place where people will turn around and wonder, ‘What just happened?’”

5 Downtown Hot Stops
While there is a lot to see and do in downtown Las Vegas, project architects Tony Hsieh and Fred Mossler had some advice for show attendees wishing to view the work in progress. “The best reason to visit downtown during FN Platform is so you’ll be able to see the contrast between this show and the next,” Mossler said. “There will be so much change over the next six months. It’s definitely worth spending some time on Fremont East and getting a feel for it, and then coming back. You’re going to see a dramatic difference.” Below, the execs offer up the must-see attractions in downtown.

1. The Downtown Project Tour
Downtownproject.com
“You definitely need a tour for the context,” Hsieh said. “I would recommend doing it first and then wandering around after because you need to know where to look in order to be able to appreciate everything.”

2. Eat
707 Carson St.
“The most common reaction we have is, ‘I can’t believe this is in Vegas because it’s not at all what you would expect,’ said Hsieh. “There is a really good energy about [the restaurant].”

4. Romotive
The Ogden, 150 N. Las Vegas Blvd.
“You can see the [tech startup’s] offices and factory — it’s all in the Ogden Apartment building. And you can play around with [the] robots [they produce],” Hsieh said.