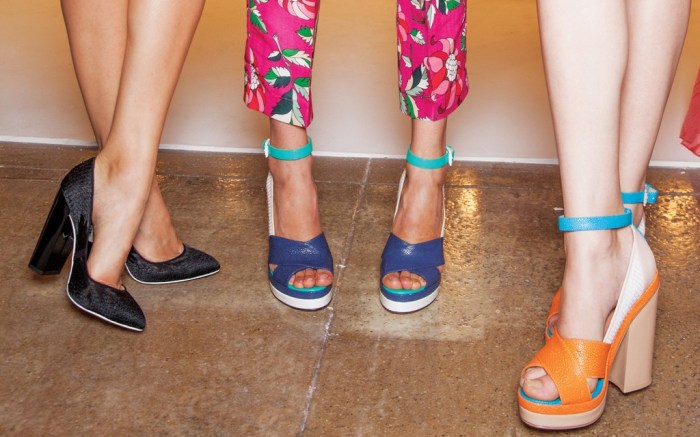 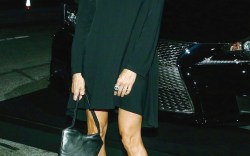 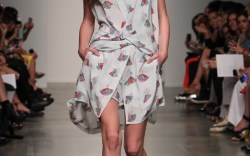 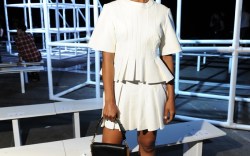 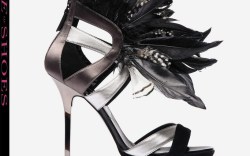 Fashion Forward
It was another major shoe moment for Sarah Jessica Parker. The actress-cum-designer hosted a preview of her new collection, SJP, at the St. Regis last Thursday with business partner George Malkemus — and she got on the floor, literally, to showcase her new styles. Parker was candid about the challenges of crafting the perfect pair of shoes, talking about everything from her quest to find the ideal “geranium” red for her pumps to getting the right fit on the Edda T-straps, named after Audrey Hepburn (it was the actress’ original name). Parker chose to wear the Edda for the line’s unveiling, but gushed, “I really love all of them.” She named every shoe, in fact, so not surprisingly there’s also a Carrie style. “Some of them are names I couldn’t use for my daughters, since I only have two,” Parker said. So are there any looks named after twins Tabitha and Marion? “No, it’s bad luck.” The collection will hit Nordstrom stores exclusively in February.

Elsewhere on the Fashion Week Circuit, Spy got the scoop on the season’s top collaborations and shoe collections. Here are a few highlights.

• Aldo Rise collaborated with London-based label Ostwald Helgason on a capsule of striped block-heel pumps, wedges and satchel-style handbags. “We started from the feet up this season,” said creative director Susanne Ostwald, who began working with the footwear brand about five months ago.

• “It’s about fresh colors and very high heels,” Jean-Michel Cazabat said backstage before the Lela Rose show. Indeed, his soaring d’Orsay styles added a sexy touch to the label’s sweet, special-occasion dresses. In an about face, he also provided punk looks for Libertine.

• And at Prabal Gurung, Cesare Casadei was the man behind the footwear for their third collaboration. “The silhouettes are very sophisticated, refined and sexy,” he said of the runway looks, adding that he was inspired by one of his favorite old-Hollywood stars. “It was a mix between roses and Marilyn Monroe, and the innovation of Prabal’s collection.”

• For the first time, designer Jeremy Laing worked with LD Tuttle on his metallic mules and ruched-strap platforms. All eyes were on the sculptural carved wood soles.

• Feminine and flirty designer Rebecca Taylor turned to beautiful metallic booties and strappy gladiators for her collection. “I live in the real world. It’s who I design for,” said Taylor. And once the fashion week madness was over? “We are going around the corner for tequila shots. It’s our tradition!” she said.

• Off the runway, Saks Fifth Avenue hosted a designer appearance with Alexandre Birman. “I’m trying to give a face to the brand,” said Birman, who is also busy training for the NYC Marathon and is a father to a 1-year-old daughter. How does he do it all? “I don’t sleep much,” he said.

Emmy Ready
Stuart Weitzman is addicted to scandal — sort of. “Kerry Washington is so compelling in the show that it has become a must-see program for me regardless of where I am in the world,” said Weitzman of his Emmy pick for Lead Actress in a Drama. As for his nomination for Outstanding Comedy, his pick was an easy one: “Modern Family. Who isn’t a Sofia Vergara fan?” Meanwhile, Sophia Webster is a true “Homeland” lover. “It has had me on the edge of my seat for so long now, and I can’t wait for the next season,” she said. And her pick for Best Actor in a Drama follows suit, too. “Damian Lewis of course,” she said. “Sgt. Brody’s character seems like a really difficult one to get right, but I believe him every step of the way.” As for Christian Siriano, he’s a fan of the Netflix variety. “House of Cards is an amazing show,” he said.

Paging Mr. Rousseau
Jerome Rousseau is hitting the books this fall. The designer’s creations are featured in two tomes slated to arrive in bookstores next month. “For the Love of Shoes” (TeNeues Publishing Group) features interviews with footwear gurus such as Fashion Institute of Technology Museum director Valerie Steele and celebrity stylist Mary Alice Stephenson, as well as designer profiles. Meanwhile, “The Complete Book of Shoes” (Firefly Books) highlights 40 iconic labels from around the world. And Rousseau’s fall ’12 Kier style, as well as others from the designer’s past few seasons, happen to be featured in both books. “It somehow makes my work seem very official to see it in a coffee table book,” Rousseau told Spy. “My label turns 5 years old this season, and the books seem to be a timely way to celebrate and to document [my] achievements.” In other book news for fall: “Do You Speak Shoe Lover? Style & Stories from Inside DSW,” hitting next month, features a Steve Madden look on the cover.

Twitter Talk
You could say that he has a way with words. Kenneth Cole, who hosted his spring presentation last week, sparked controversy again recently when he reminded Twitter followers to buy his shoes, but used a Syria reference to do so. “‘Boots on the ground’ or not, let’s not forget about sandals, pumps and loafers.” So how did he defend his choice words? “I’ve never looked to offend anyone over the years,” Cole told Spy. “I’ve consistently talked about political issues throughout my career and this was just meant to start conversation.” (Cole previously caused some uproar in 2011, when he tweeted about the conflict in Cairo, Egypt.) Shifting gears, the designer was optimistic about his spring collection and its refined high heels. Among the offerings were new colorways — injections of green, coral, white and “50 shades of black,” Cole joked.