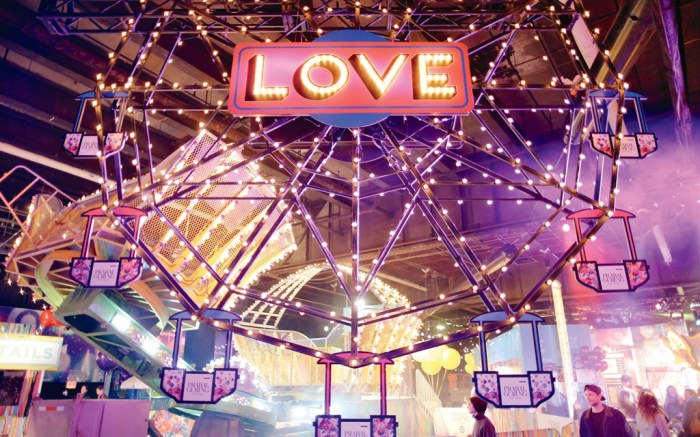 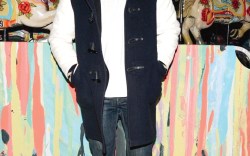 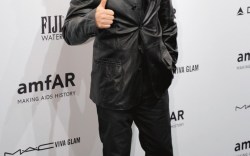 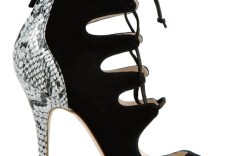 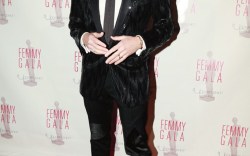 Carnival Daze
Prabal Gurung loves a good carnival ride. The designer felt like a kid again at the kickoff party last Wednesday night for his apparel, accessories and footwear collaboration with Target. “It’s amazing, exciting and surreal,” the designer said of the event — a wild, whimsical indoor carnival, complete with full-size games and rides at Pier 57 in Manhattan. The fête drew a slew of celebrities, including Carey Mulligan, Olivia Thirlby, Elizabeth Olsen and Rashida Jones, all ready to indulge in the festive atmosphere and pre-shop the limited-edition wares, which were released to the masses over the weekend. Gurung said he also was gearing up for a busy Fashion Week, with his second runway show today. So how does the designer keep his energy up throughout such a hectic month? “[Spending time] with friends and family,” he said. Phillip Bloch attended the Target party, but his mind was on the AmfAR gala (which was happening simultaneously at Cipriani Wall Street). Earlier that day, Bloch completed a last-minute styling job on Lindsay Lohan for the event. “My friend Charlie Sheen called me and said, ‘Hey, hook my friend Lindsay up. … She wore a Theia gown with some of her own gorgeous Prada shoes.” The stylist added he was impressed to get Sheen’s call. “I have never seen a celebrity do that for another celebrity.”

Leguizamo’s Life
Kenneth Cole has a friend in John Leguizamo. The actor was on hand at AmfAR’s New York gala on Wednesday, where Cole was being honored (alongside Janet Jackson and Heidi Klum) for his contributions to the foundation for AIDS research. Leguizamo sported a pair of 2-year-old Kenneth Cole slip-on shoes for the occasion, but the actor tweeted that Cole offered to “upgrade” him after spotting the footwear. Leguizamo likes to kick it old-school, however. “[Kenneth] started out with some shoes in the 1990s that were my favorites, so I always go to him,” Leguizamo said. “There’s something cowboy-gangster about [the shoes] that I like.” And Cole was full of praise for his pal, too. “I’ve known John for a long time and I love his energy and style,” he said. “I like the shoes that he walks in.”

Runway Angst
When it comes to Fashion Week, even the pros get jitters. Designer Monique Lhuillier told Spy she feels nervous before every presentation for her eponymous apparel and footwear label. “I always get butterflies,” Lhuillier said at her showroom last week. “You think about thousands of people [looking at your collection], and when you come out at the end, there are all the lights and cameras.” Supermodel Karlie Kloss said the feeling is mutual, but she also sees the adrenaline boost as a plus. “That’s the fun part,” she added. “The moment I stop getting butterflies is the moment I need to stop [doing runway].”

Oscar Buzz
Carson Kressley, who will report live from the red carpet with Kelly Ripa and Michael Strahan during the Academy Awards on Feb. 24, has some predictions for the big night. “Footwear has been relatively tame [at the awards shows so far],” he said at the Femmy awards last week. “But everybody traditionally puts their best foot forward for the Oscars.” Speaking of which, Kressley was rocking some studded smoking slippers by Christian Louboutin. “These are good for New York because you don’t need mace,” he quipped. “They are a good investment, and I’ve amortized them per wear, so now it works out to only $60 per outing.”

Shoe Frenzy
The Fashion Institute of Technology is shoe obsessed. The latest exhibit at the Museum at FIT showcases a selection of 150 top styles from the 21st century. “I didn’t know what to expect,” said designer and exhibitor Charline De Luca, “but when I saw all the press, I said, ‘Wow, am I really going to be standing next to all those amazing designers?” Gianluca Tamburini, whose work also appears in the exhibition, was in town last week to host a trunk show at Saks Fifth Avenue, where he hoped to sell at least 10 pairs retailing for more than $5,000 a pop. “New York is New York after all,” he quipped.

On Set
Pour La Victoire is headed to the South of France. The brand teamed up with iconic photographer Terry Richardson and model Jessica Hart for the second time — now for a spring campaign shot on a set designed to feel like a holiday vacation. “I love the spring campaign as it features the PLV woman in a more relaxed style. She really let her hair down,” said PLV Studio Creative Director David Giordano. And the brand had a new member on the set — recently appointed CEO Chris Nakatani, who might have been a little star struck. “Great first day on the job. I walked into the frame of Terry Richardson shooting Jessica Hart,” Nakatani told Spy. “I was extremely impressed with the scale of the production of the photo shoot. I felt like I walked on a movie set.” Also managing the set was stylist Kate Young, and Richard Kirshenbaum of NSG/SWAT served as creative director. The campaign will appear in March magazines.

Spotted…
Bob Goldman cheering for the Los Angeles Lakers. The Chinese Laundry CEO went out to root for his favorite team when they played the Brooklyn Nets last week. “My favorite part was when Kobe [Bryant] dunked on Kris Humphries and Gerald Wallace,” he said. And the exec even had some celebrity sightings, too: Nets owner Jay-Z and Billy Crystal were in the crowd at the Barclays Center.