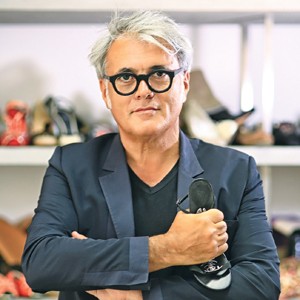 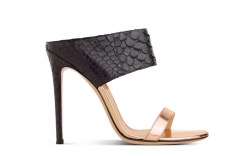 Milestone Marker
Giuseppe Zanotti’s eponymous footwear collection turns 20 next year, and the designer is going back to his roots for a few of his spring ’14 styles, incorporating the same vintage jewelry embellishments he used early in his career. Meanwhile, stateside, the designer plans to set up shop in Atlanta this fall. The city, a hotbed for hip-hop artists, could get some help from a major artist, he hinted. Could it be friend and sometime-collaborator Kanye West?

Rossi’s Run
“Beautiful!” exclaimed Bergdorf Goodman President Josh Schulman as he perused Gianvito Rossi’s spring ’14 collection last week in Milan. Also on the scene during Spy’s visit: Bergdorf’s Linda Fargo, Selfridges’ Sebastian Manes and Lucky editor-in-chief Eva Chen, among many others. It’s no secret that Rossi, the son of Sergio Rossi, is attracting major attention these days. “It seems like fashion is [shifting] to my point of view,” said the designer. The hard-working Rossi said he wouldn’t slow down after Milan Fashion Week, either. “I don’t have time to relax!”

Raoul & Raphael
Raoul co-creative directors (and Singapore power couple) Douglas and Odile Benjamin hosted a fashion week fete to welcome Raphael Young, who now heads up design for the label’s footwear and handbags. Young, who splits his time between the City of Light, New York and Milan, will reveal his first collection for the brand for fall ’14. Still, Odile Benjamin couldn’t resist taking one of Young’s bag prototypes out for the evening. “You have to stop stealing the samples,” her husband joked. “I’m simply test-driving,” she responded. The multitasking Young also hinted at another exciting project with a major luxury house, set to be announced in the coming months. “You’ll have to wait and see,” he said.