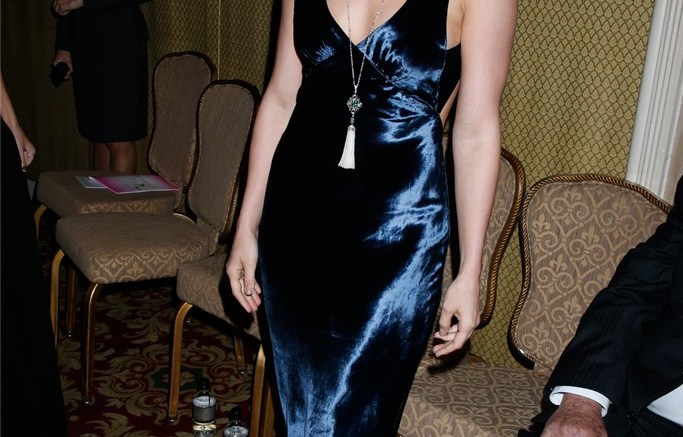 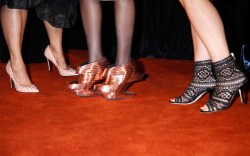 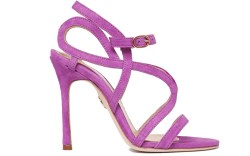 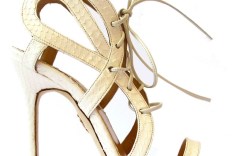 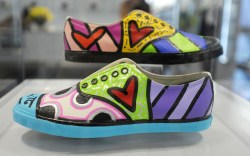 Footwear Frenzy
Julianne Hough said that creating a footwear collection is challenging in many ways. The hardest part? “Waiting to wear the shoes,” Hough said of her eponymous collaboration with Sole Society. “We are working on production almost a year out, so you tend to fall in love with silhouettes a season ahead.” Luckily, a pair of black pumps were ready last week for the FFANY Shoes on Sale charity gala, for which Hough acted as a host and spokesperson. “Working on my shoe collection has allowed me to explore my creativity in a new way,” the actress noted. “It’s really exciting to watch your designs take shape.” Also at the event,
Gail Simmons stepped out to support the cause. The “Top Chef” judge wore sky-high Saint Laurent heels that were appropriately pink to complement the evening’s most popular color. “They never go out of style and the platform actually makes them comfortable,” Simmons said. Elsewhere, FFANY captured the best shoe moments on camera to crown the “Best in Shoe” winners, which included looks from Boutique 9, Vince Camuto and United Nude.

Spring Break
Theresa Ebagua has a lot to celebrate. Not only did the designer behind 3-year-old footwear brand Chelsea Paris showcase her spring collection at London Fashion Week for the first time, but retail giant Barneys New York has picked up key styles for both resort and spring ’14. “I am thrilled to have Barneys carrying the Chelsea Paris line. They are the authority on fashion and luxury,” Ebagua said. Among her offerings for the season are bold sandals in monochrome hues with plenty of snake and hints of red. Traces of Ebagua’s native Africa also are included in the collection’s DNA. And to keep things interesting, a new signature silhouette will be introduced next winter. “That’s all I can say for now,” the designer hinted.

In Living Color
Lacoste has a new definition for the term “blank canvas.” Pop artist Romero Britto partnered with the sports brand to hand-paint three original Rene Lacoste tennis shoes, which were auctioned off at an event in Miami last week to benefit the nonprofit organization Best Buddies, which supports people with developmental disabilities. “We are very proud to work with Britto and Best Buddies for this collaboration,” Lacoste Footwear’s North American president Dave Grange said. “A world class artist and a fantastic charity with Best Buddies was a superb partnership for Lacoste.”