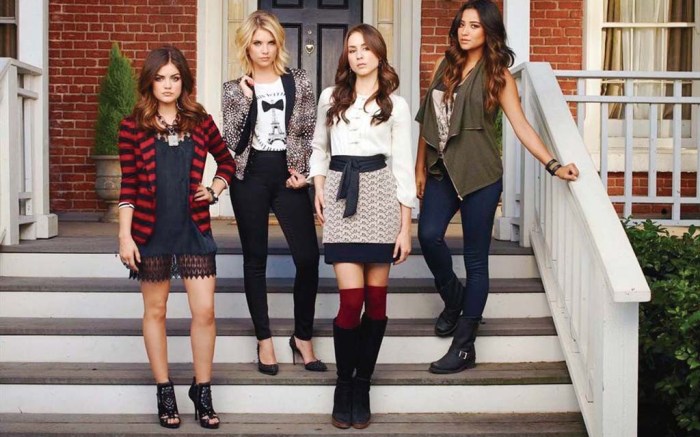 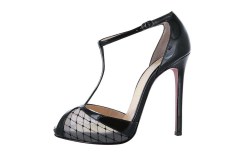 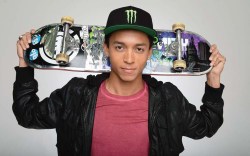 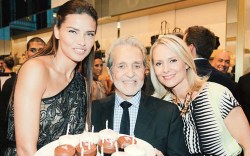 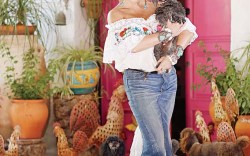 High Stakes
“Pretty Little Liars” is upping the footwear ante. For season four, which kicked off last week, costume designer Mandi Line said to expect some standout looks that are “higher, taller, louder and brighter,” adding that brands such as Jeffrey Campbell, Rebecca Minkoff, AllSaints, Steve Madden and Nike all made the cut. “I truly get my inspiration from the scripts and what I couldn’t [wear] fashionwise when I was in high school,” said Line. “Yes, trends affect me, but only a little.” Here, she talks about taking style risks and why limits on boots do not exist on the ABC Family show.

How would you describe the overall footwear style for the main four characters?
“Unique, random, daring, edgy and the higher the heel the better.”

Do you have a favorite character to dress?
“Aria because she takes risks. There is nothing actress [Lucy Hale] doesn’t trust me with.”

What shoe brands do you prefer to style the male cast members?
“AllSaints, Ben Sherman, Steve Madden, John Varvatos and, of course, Converse.”

Any behind-the-scenes shoe moments to share from season four?
“Look for the platform Nikes. The girls die for them. And you should always play the game, ‘How many boots can Mandi put the girls in for one episode?’ No matter the season, no one in life can have enough boots.”

Red-Letter Day
Saks Fifth Avenue has got a lot of sole — red sole that is. The retailer’s 10022-SHOE floor debuted its much-anticipated Christian Louboutin shop-in-shop last week. Expansive and impressively stocked — Spy counted about 205 SKUs on the floor — the space features many signature Louboutin store elements such as a red carpet and arched walls. The Saks staff was seen putting the finishing touches on the space Thursday morning. “You should have seen us at 9:30, putting up all these things,” one staff member said to her colleague, pointing to the electric-blue chandelier in the center of the space. The boutique will rank as one of Louboutin’s largest worldwide.

Street Smarts
Fresh off his second gold-medal win at the X Games Street League contest in Barcelona, Spain, pro skater Nyjah Huston is finding that being the reigning champ has its downsides. While the accolades are appreciated, Huston said they make it harder to maintain his anonymity. Still, the 18-year-old takes it all in stride. “I don’t try to hide myself when I’m skating with my homies,” he said. “When kids recognize me, it definitely adds a little more pressure to land some tricks.” Huston, who recently debuted his first signature sneaker with DC Shoes, isn’t resting on his laurels. “I plan on continuing to street skate as much as I can and make some progress with new tricks.”

New Doors
Vince Camuto put in some face time this week with new friend Adriana Lima. “[Vince’s] design is fashionable and affordable, and I’m really happy that I got a chance to be here and meet him in person,” said the supermodel, who played hostess at the opening of Camuto’s first VC Signature flagship on Madison Avenue last week. And Lima was rewarded for her services, too, with some surprise cupcakes and champagne to celebrate her June birthday. But with the store officially in business, Camuto and his wife, fellow shoe exec Louise Camuto, were ready for a vacation. “We are working until the end of the week and then we head off to Europe,” Vince Camuto told Spy. “We are going to Capri and Positano, and we are bringing all of my daughters to spend a couple of weeks there. Then Louise and I will probably spend another week by ourselves and head back [to New York] for July.”

Beverly’s B&B
Beverly Feldman’s fans can now catch a behind-the-scenes glimpse of the footwear designer’s life. Inspired by her hotelier brother, Feldman recently opened an inn, Finca Belon, inside her sprawling home in Alicante, Spain. Visitors can choose between three plush guest suites in the 18th-century farmhouse, where they are treated to a look at the shoe archives, homemade sangria, cuddles from the designer’s 10 poodles, massages from onsite staff and a tour of the city’s best haunts with Feldman herself — at least, when she’s in town. While Feldman said the hotel is a money-making venture — “We’re going to be the new Hiltons,” she quipped — she also admitted that the endeavor was a good excuse to put her penchant for home décor to good use, creating everything from themed bedrooms to a jazzed-up pool area.

Spotted
Cyndi Lauper in red-hot heels by Valentino while performing at the Tony Awards. Apparently, her “Kinky Boots” were left at home.