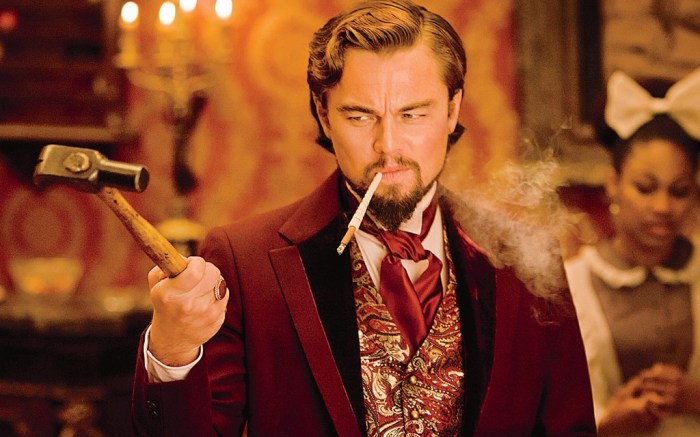 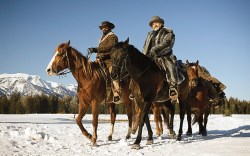 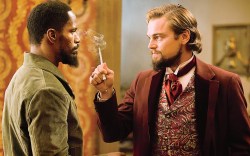 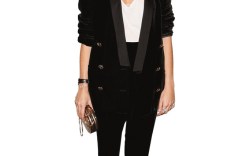 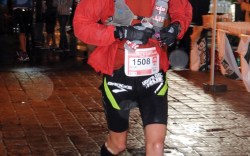 Wild Wild West
Western looks are back on the big screen. Style in Quentin Tarantino’s latest Golden Globe-nominated film, “Django Unchained,” was inspired by cowboy movies of the 1960s. “Quentin had a lot of films for me to watch,” costume designer Sharen Davis told Spy. “It was kind of fantastic because it pointed me in the right direction of how he wanted this film to go.” Set in the South two years before the Civil War, Davis said the outfits in “Django” have elements of a spaghetti Western. “I had to characterize each of the leads so the audience would immediately know who was a good guy or bad guy,” Davis said of working with top actors such as Leonardo DiCaprio, Jamie Foxx and Christoph Waltz. Here, the costume designer (who is also eagerly awaiting the Academy Award nominations, out this Thursday) talks about bringing the Wild West to the Old South.

Tarantino wanted this film to have the look and feel of spaghetti Westerns of the 1960s. How did you incorporate that in your shoe choices?
“We had a lot of cowboy boots, but I had to find boots that were in 1850 and not 1880. So a lot of the boots don’t have a lot of flair, like tooling or that little Western-cut dip that cowboy boots are known for, because a lot of that started in the late 1800s. I got very little sleep because a lot of these characters, like Django [Foxx], are cowboys in 1850 and I couldn’t stay within the confines of the period. I took a lot of inspiration from pioneer people traveling to the West, [such as] pre-cowboy looks, so I didn’t cheat too badly.”

DiCaprio plays the villain and his style is different from the other leads. What was it like styling his character?
“Leo plays a southern plantation owner born with a lot of money, so I put him in richer colors like brown and burgundy, where most of the other colors are black and gray. Leonardo has great shoes. He has a pair of John Varvatos spat shoes that have side buttons and also a lot of half boots. We went to Varvatos for a lot of Leo’s shoes because he makes shoes that kind of look like the period.”

Any memorable style moments behind-the-scenes?
“One of my favorite memories was working with Don Johnson. Subliminally, I was thinking of a blend of Miami Vice when I was dressing him. He can just wear that white suit.”

Her Word
Get ready for a shoe shout out. Man Repeller blogger Leandra Medine told Spy that footwear gets a notable mention in her upcoming collection of essays on her life experiences and fashion. “There’s a chapter called ‘The Glitter Shoes,'” the style blogger teased, “but that’s all I’m going to say.” Medine has been putting the finishing touches on her book, which is reported to hit shelves this year. “I get so wrapped up in what I’m writing,” Medine said of the process, which requires her to relive good, bad and ugly moments, like an old break up with her now-husband.

High Heels
Beverly Feldman found a muse for her fall ’13 collection in an unlikely place: Nancy Botwin (played by Mary-Louise Parker) on Showtime’s recently-ended “Weeds” series. “[Nancy’s] style was so unlike mine, so California and so bizarre,” Feldman said. “She wears knee socks with clog sandals or boots and loose weird tops. … Not at all the Euro, high-fashion chic that I am familiar with. But I thought it was cool.” The Alicante, Spain-based designer, who watched all eight seasons in late-night rerun marathons, also said she found a bit of herself in the main character. “I related to Nancy, as she was always trying to sell her product, support her family and getting involved with various bad boys. Just change the weed [to] shoes and there was my life.” As for how the show will translate into footwear for her eponymous label, Feldman said a modernized aesthetic including booties, combat styles, sportier looks and round-toe shoes will exude California-cool. “I’m also including striped knee socks with every purchase,” she quipped.

Big Screen
Will Scott Jurek be coming soon to a theater near you? The fabled ultrarunner, who gained a whole new level of fame after his star treatment in blockbuster running book “Born to Run,” has been working with Peter Sarsgaard as the actor prepares to direct a big-screen adaptation of the tome. But Jurek said he’s not sure if he’ll play himself in the movie. “If [Sarsgaard] wants his brother-in-law” — yes, that would be Jake Gyllenhaal — “to play me, that would be OK, too.”

Spotted…
Fred Mossler and his groomsmen in custom Lucchese boots he designed for his Dec. 22 wedding. The stingray-embellished style even featured a special embroidered message: “Fred and Meghan, Sundance Resort 12/22/12.” Blushing bride Meghan Boyd sported Louis Vuitton during the ceremony and dinner reception, before switching to Giuseppe Zanotti for the dance party later in the evening. Meanwhile, Ugg Australia surprised the entire wedding party with first editions from the brand’s new “I Do” collection of booties and slippers.

Man About Town
Kurt Geiger is linking up with hot emerging British menswear talent James Long for a collaboration to be unveiled at this week’s London Collections: Men. The line will feature three styles, including a horse-hair ankle boot and two inside-out monk shoes, all of which come on a cleated rubber wedge. “We wanted to [fuse] the craftsmanship of our Kurt Geiger London label with James Long’s unique attitude,” said Geiger Creative Director Rebecca Farrar-Hockley. Added Long: “It has been a very organic collaboration. Having the shoes work with the collection’s concept really finishes the look.” The line will hit retail in September.