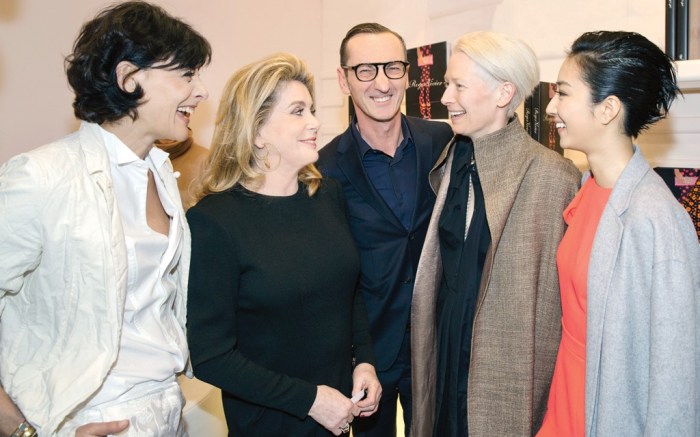 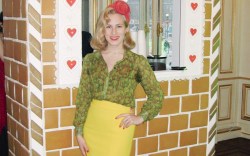 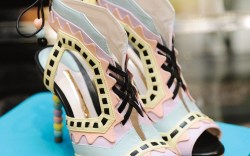 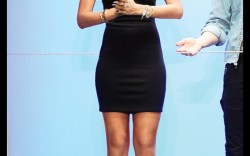 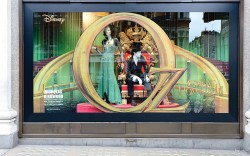 French Toasts
There was no shortage of might in the City of Light last week. On Monday evening, Tilda Swinton and Catherine Deneuve helped Bruno Frisoni and Ines de la Fressange fête Rizzoli’s newest fashion tome, “Roger Vivier,” which celebrates the history of the label and honors its late founder. “It was, it is, it will,” is how Frisoni poetically summed up the theme of the book, featuring more than 300 color photos and sketches. “We didn’t want to bore people with too many words and details. It’s more like a scrapbook,” the designer said during the label’s elegant presentation a few days earlier. Frisoni once again drew from many inspirations, including Las Vegas and sophisticated Parisian women, namely Fressange, who helped him dream up the much-buzzed-about satin pumps adorned with a makeup brush.

The next night, Swinton and Princess Caroline of Monaco co-hosted a Pringle of Scotland event to celebrate a special collection inspired by Grace Kelly. Manolo Blahnik collaborated on the footwear styles.

Charlotte Olympia Dellal had everybody talking with her “Once Upon a Time” collection, replete with riffs on classics. Among the standouts: shoes with Big Bad Wolf appliqués, crown jewels and porcelain frog figurines. The Rapunzel braided heel also figured prominently alongside watch-themed Perspex handbags. “All my inspirations are something I’ve come across and kept in mind for the right moment,” the designer said. Also fitting for a fairy tale, Dellal served coffee out of a life-size gingerbread house. “Some people don’t believe me that it’s real so they’ve been trying to eat it,” she joked.

Tabitha Simmons enjoyed being a spectator in Paris this season. After runway gigs in New York and Milan, she swept into town to present her fall collection and catch a few shows from the front row. “There is beauty in both points of view,” she said, “but it will be nice to relax and catch a show.”

Relaxation wasn’t on the schedule for Laurence Dacade, though. The designer was literally running between her showroom and the Chanel studio for much of the week to put the finishing touches on the rock-star shoes Karl Lagerfeld sent down the catwalk on Tuesday. Dacade was dreaming of quieter days and a getaway to New York, where she always makes sure to check out a Broadway show. On her must-see list? “Kinky Boots.” “I just loved the movie!”

Travel aficionado Pierre Hardy was also plotting his next trip, a journey to Japan. “It’s half work and half fun,” said the designer, who is spending a lot of time in the Big Apple these days. “Our store there is doing really well. It’s [tucked away], but now everyone knows about it.” Hardy also hinted at a new collaboration, which will debut in New York in April, and dished on his personal shoe collection. “I probably have about 200 pairs now!”

Travel Log
It has been a year of big firsts for Sophia Webster, and the emerging designer du jour marked another one this month: her inaugural trip to Hong Kong to make a personal appearance at On Pedder. “The customers here go for the shoes that are the most unique and expressive — they are fearless,” said Webster, who also carved out some time to tour the city. “I enjoyed visiting the boutiques in the Mongkok shopping center and the night market at Ladies Street. There was such a buzzing atmosphere at night.” Up next, Webster will appear at Bloomingdale’s in Dubai, where she is planning to also host her own birthday party.

In Rihanna’s Shoes
Stop, collaborate and listen. When it came to creating footwear for Rihanna’s spring collaboration with London label River Island, the singer and her design partner, Adam Selman, were all about striking a balance. “I wear chukka boots almost every day, and she performs in a lot of combat boots,” said Selman, who custom creates many of the singer’s costumes for performances and photo shoots. “We wanted to do a spin on the traditional army boot. They couldn’t be too crazy and they had to be comfortable, but they also had to be very ‘girls about town.’” Last week’s Manhattan launch party for the shoe and apparel line also featured a retrospective of the best Rihanna fashion moments, a curated selection of outfits the star has worn. Footwear on display included everything from graffiti-covered creepers to stiletto sandals. Selman said dressing the celeb is always a collaborative effort between Rihanna, stylist Mel Ottenberg and himself. “Mel will come up with a vision and then I execute,” Selman noted. “He pulls from [other] designers and we mix it all together to make it work.”

Oz Fest
Nicholas Kirkwood, Disney and Selfridges — what a combination. The designer, known for fantastical creations, is in the spotlight at the London department store this month, through his exclusive capsule collection inspired by the new Disney film, “Oz the Great & Powerful.” Selfridges last week debuted an Oz pop-up, complete with a yellow brick road, original costumes and props from the motion picture. The project is a centerpiece of the retailer’s two-month-long “Shoe Carnival” celebration, which will highlight both the women’s and men’s shoe departments. Kirkwood, Charlotte Olympia Dellal and Rupert Sanderson are among the talents who have created exclusive carnival-themed designs, some of which are displayed in the Oxford Street windows. “I couldn’t believe that I got three windows at Selfridges,” Kirkwood told Spy. “We are thrilled!”

Just In…
Julianne Hough as the new face of FFANY Shoes on Sale. The actress and Sole Society collaborator will act as the event’s spokesperson, with a spot in the PSA and a place at the October event in New York, presented by QVC. “We’re very fortunate to have someone of this status for our 20th anniversary,” said FFANY President and CEO Joe Moore. “She’s a hot topic at the moment.”