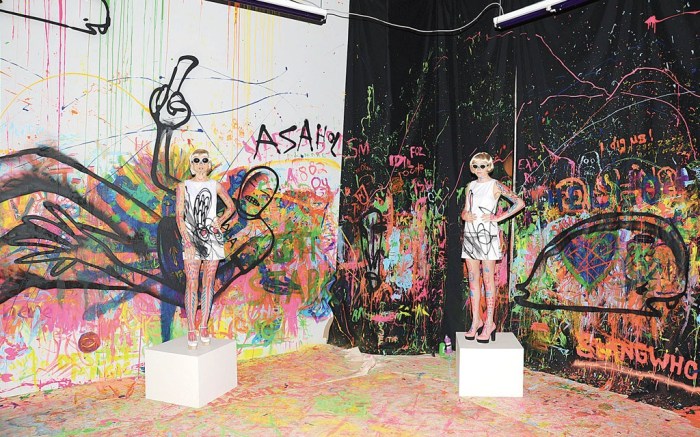 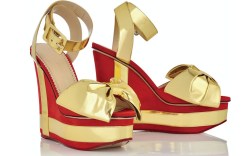 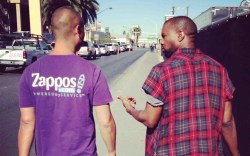 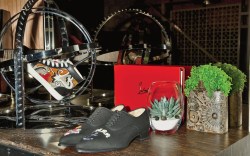 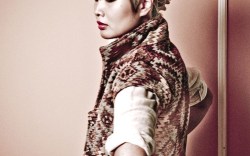 Graffiti Artist
Nicky Hilton and Stacey Bendet go way back. “I’ve known Stacey since I was in high school. I used to buy [product] from her out of her apartment. It’s so great to see how successful she’s become,” said Hilton, who came out last week to fête Bendet’s Alice & Olivia spring collaboration with artist David Choe. The partnership initiative marked the launch of the Kindness Project, an effort to spread the message of love around the world. Zosia Mamet and Vashtie Kola also were on hand at New York’s Ambassador Gallery under the High Line. Before the event, Choe and Bendet spent time together at the brand’s freestanding store across the street from the venue. “When I showed David our collection, he suggested making the eyeglasses mirrored so guys could see up girls’ skirts,” Bendet joked. The party itself featured a glow-in-the-dark graffiti room with splatter-painted models. DJ Hannah Bronfman mixed tunes and brought rapper-friend Theophilus London on stage for an impromptu performance.

Food for Thought
Meatballs are on a roll. Michael Chernow, co-owner of New York foodie fave The Meatball Shop, hosted a Christian Louboutin men’s store event last week, where he talked about his trendy business venture. “I was bartending for a long time, and people always wanted the best burger or the best pizza, so I started to listen to that. I said, ‘OK, I’m going to handle the meatball,’” he said. “People aren’t always interested in a five-course meal. They want simplicity.” Also in attendance was Eater.com founder Ben Leventhal, who dished on some of his favorite New York spots, including The Spotted Pig and Barbuto. Louboutin COO and GM Alexis Mourot — who had a twin moment with Chernow (they were both wearing Louboutin’s Napoli style) — was in New York before jetting off to Japan to celebrate a store opening there. “After that, I’m going to prepare for the holidays,” the exec told Spy. “I’ll be in Switzerland skiing with my family over Christmas.”

On a Mission
The footwear industry is rallying to aid survivors of Typhoon Haiyan. In addition to Skechers and Soles4Souls’ joint 200,000-pair donation, the Fashion Delivers and K.I.D.S. charities are collecting shoes, socks, blankets and basic apparel to ship to affected areas of the Philippines. Dansko also is sending 2,200 pairs of children’s shoes to the Southeast Asian island nation in partnership with Operation Compassion. And designer Ivy Kirzhner donated 100 percent of sales from three days of her site’s e-commerce sales to Doctors Without Borders’ relief efforts. For Kirzhner, the cause is particularly poignant. “Super-typhoon Haiyan affects me personally as a Philippine-born American,” she told Spy. “I actually flew into Manila during the [storm] to be with my sisters who still live there. I definitely wanted to make a personal and professional contribution to help rebuild from this tragedy.”

Betsey’s Time
Betsey Johnson’s footwear and apparel collections might reference bygone decades — “I loved the 1960s. That was my favorite time,” the designer told Spy — but the fashion icon also prefers to be in the moment. “I don’t like to compare what was and what is,” she said. “I [focus on] charity, my grandkids and my daughter. I also like the [technology craze], but I’m computer illiterate. I would love to figure out how my 7-year-old granddaughter is so brilliant on those machines and I jinx them.” But that doesn’t mean the designer doesn’t have some high-tech fantasies in mind for future Fashion Weeks. “I want to present in a new way,” Johnson said. “I want to project my show on the sky for the whole world to see.”