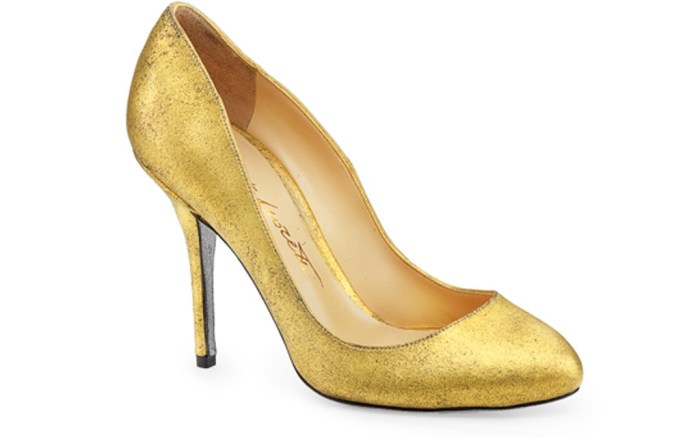 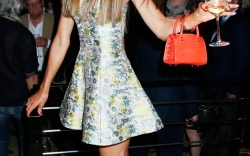 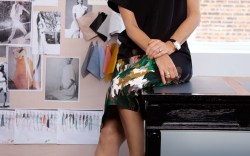 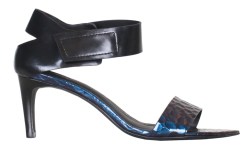 Striking Gold
Alberto Moretti’s 24-carat, gold-adorned stilettos, first unveiled at the Monte Carlo Grand Prix in late May, will soon be available for the taking — at a hefty price. The heels, priced at $4,000 euros ($5,206 at current exchange) will hit Barneys New York, Fred Segal Los Angeles, Harrods London, The Swank Hong Kong and Level Shoe District in Dubai in September. “I worked with the velvet, [which we covered in gold leaf], and treated it as a piece of jewelry,” said Moretti. The designer also is unveiling a men’s loafer version.

Dogs’ Treat
For Ruthie Davis, the dog days of summer are about to begin. The designer is headed to Shelter Island, N.Y., for part of July, and she’s booked a pup-friendly bed-and-breakfast to cater to her two Italian greyhounds. “It’s the first time I have planned a vacation for me and my dogs and my husband,” Davis said, adding that she’s a huge fan of the canine kind. “Notice I said dogs before husband,” she quipped.

Straight Shoe-ter
Amy Smilovic went nuts for Tibi’s pre-spring collection. For resort, the designer chose an almond-shaped tip to give her heels a sophisticated edge while maintaining a sporty feel. “I want everything to be incredibly comfortable. It should have a bit of ease about it,” Smilovic said. Styles range from mid-heel silhouettes with Velcro closures to neoprene booties with treads on the soles to bring in the worker element. Smilovic’s favorites include the backless sporty sandals. “I can’t be bothered with straps anymore. I’m really into slides and shoes without a back,” she said while donning a breezy dress paired with chic neutral flats.