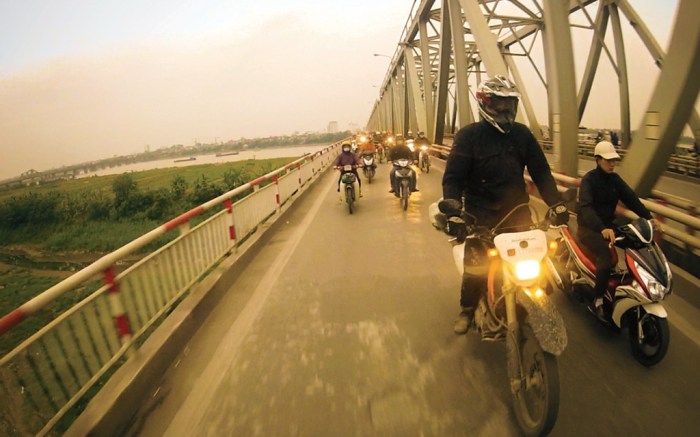 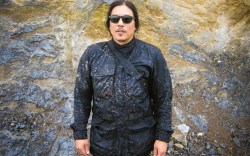 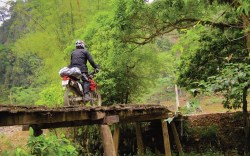 For footwear designer Hing Yeung, motorcycles aren’t just a mode of getting around — they’re a gateway to adventure, an aesthetic inspiration and a great way to put things in perspective.

Yeung, the creative director and founder of Santa Ana, Calif.-based design firm Hong Kong Stunt Team, got his start working on the accessories line for Walter Van Beirendonck, and later designed for the relaunch of Adidas Originals. Through Hong Kong Stunt Team, Yeung has worked on footwear projects for brands including Puma, Reebok, Speedo and Lego. And since his teen years, the Hong Kong native (who grew up in Holland) has been a motorcycle enthusiast.

As a youngster, Yeung rode motorcycles and followed off-road car race Dakar Rally. “I was always intrigued by the adventure part of it and the challenges people had to deal with and how tough it was,” he said.

The riding turned more serious after his position with Adidas started taking him to Asia in 1998.

“I got more into the adventure motorcycle [world at that time],” Yeung recalled. “I would take trips to the Philippines and other countries, and I found out the best way to explore a country is on the motorcycle.”

And being on two wheels lets him experience countries in a new way.

“You can be very agile within any condition, in the jungle or rough terrain. And if you go through a jungle, you can smell all the vegetation and animals, and you’re more connected to your surroundings,” he said. “I don’t have to wait for buses. And because you’re limited in what you can bring, you have to travel very light and simple. I have more freedom.”

Yeung’s travels have included 10 days in Nepal riding through the Himalayas, and one trip earlier this spring, when he rode from Hanoi, Vietnam, to the Chinese border and back.

Today he owns six motorcycles, including a 1981 BMW R80G/S and a “very fast” Ducati road bike that he mostly rides on tracks “because it gets me into trouble on the road,” he said.

His bikes show up in his designs in ways both literal and figurative. For a spring ’13 Hot Wheels collection Yeung created for Mattel licensee INA, the design brief asked that the miniature cars come to life. Yeung found artistic ideas in his own garage.

“Actually, one of the shoes was inspired by the Ducati — the colorways and exposed engine. You see a lot of engine parts, and that comes from motorcycles more than cars because you can see the engine,” he said.

But beyond specific design elements, Yeung’s general aesthetic is heavily informed by his travels on the bike.

“My personal [design] style is very minimal, very essential,” he said. “I like to travel light and live very simply.”

And Yeung noted his days on a bike give him a framework for dealing with the pressures of clients and jobs.

“On the road, you fall multiple times, you get hurt, you’re tired, you’re hungry, you want to give up,” he said. “But you can’t stay in the middle of the jungle. You have to get out of there on your own.”

And when he gets back, “everything else is like less of a problem,” Yeung said, adding nonchalantly, “I had bloodsucking leeches all over my body in Nepal. I’ll deal with these [day-to-day] problems.”