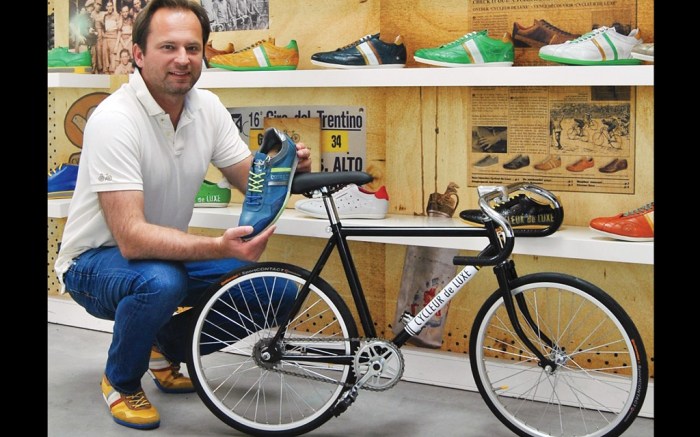 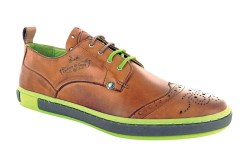 It’s fair to say the idea for Cycleur de Luxe started in a bar.

That’s where founder Patrick Vanneste first encountered a group of jovial bicyclists and decided to try the sport himself. The passion he discovered inspired him to launch his footwear line in 2011.

“I was having a drink [in 2009] and saw all these cycling guys coming in with friends, and they invited me to join them. I was really impressed by the sport — on one side, the physical part, but on the other, the community around cycling, which is a cultural thing around here,” said Vanneste, who is based in Belgium. “The nice thing about cycling is there is no barrier. It’s the postman together with the CEO or president of companies, and then everybody has a drink together.”

Vanneste soon accompanied the cyclists on an outing outside a small village in Belgium. Afterward, the group attended a music festival and socialized. He was hooked.

Since then, he’s participated in several races and now takes his bike out at least once a week, going about 40 miles at a stretch.

But the footwear veteran, who runs a successful company that distributes Merrell and other brands in Belgium and has the worldwide license for Patrick 1892, also wanted to play into his love of cycling with a new footwear brand. (Around the time he started the sport, his first brand, the women’s fashion-oriented Sprox, was sold to the Cortina Group.)

“There was nobody in the market doing that, and cycling is one of the fastest-growing sports in the world,” Vanneste said.

Cycleur de Luxe began with one sneaker, inspired by old performance-cycling shoes of the 1950s. His version had rubber outsoles and comfort insoles. Slowly, he introduced more lifestyle looks in colors inspired by renowned bicycle races — like the yellow T-shirts from the Tour de France and the pink ones of Giro d’Italia.

The full shoe range, which debuted with just men’s, now includes the original sporty sneakers as well as casual low- and high-tops and hybrid casuals for men, and a selection of sneakers for women, priced from $150 to $200. Race-inspired shirts and hats are also available. The shoes aren’t necessarily for wearing while cycling but rather for fans of the sport who want to continue the look off the bike. But every shoe tells a story about the sport.

“In every style, you will find elements of a bike, a spare part or an old cycling shoe,” said Vanneste. “For example, the tongues are perforated. Sometimes you see the number of eyelets are increased on some looks because the original authentic shoes are reflected in [our designs]. These elements come from the cycling industry.”

Cycleur de Luxe is bringing its vélo couture, as Vanneste calls it, to the U.S. for spring ’14. The founder said he will focus on larger cities at the outset, noting that New York is ideal given its recent introduction of the bike-sharing program, Citi Bike.

“We’re going to focus on the areas where cycling is already a part of the lifestyle,” he said. “In big cities, people like it because it’s convenient.”

And after a stop at FN Platform this week, the executive heads to Mont Ventoux in September to tackle the mile-high climb in the Provence region of France. Known for its steep incline, the mountain is probably best recognized for its role in the Tour de France.

“Every little bit [of me] is going to hurt there,” Vanneste quipped.

But as always, he has managed to combine biking with camaraderie. After the cycling tour, Vanneste and his friends will attend a wedding down in the valley.

“Before, I was doing different sports — kite surfing and wind surfing and sailing — and I never thought cycling could be a community that I could enjoy,” he said. “It’s such a nice, social community.”