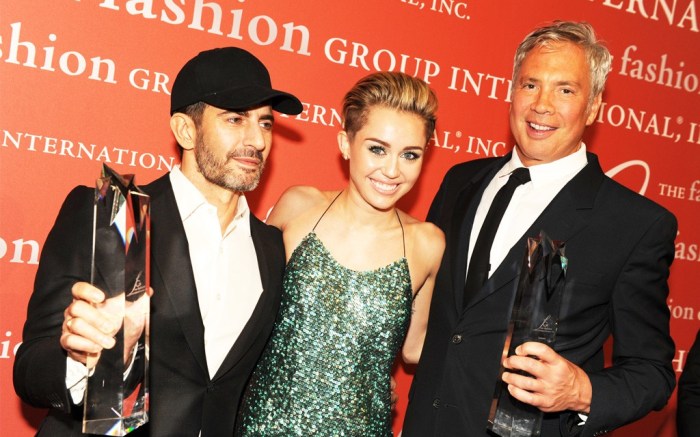 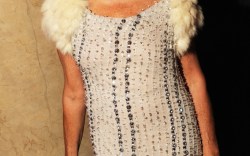 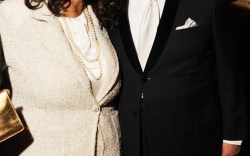 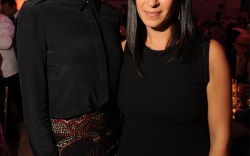 Fashion Group International honored Marc Jacobs and Robert Duffy at the 30th annual Night of Stars Gala on Tuesday, and true to its name, the event brought out an array of sought-after celebrities.

Miley Cyrus, who appeared at the event in a sparkling Marc Jacobs gown and Saint Laurent sandals, garnered substantial buzz as the presenter of the Superstar Award, which went to Jacobs and Duffy.

Duffy told Footwear News he personally invited the controversial singer, who also appeared nude on Marc Jacobs’ “Protect the Skin You’re In” T-shirt, released in July. “Miley is a friend of mine,” he said. “I’ve known her since she was 16. I know her parents, and she came to a party at my house in Savannah, Ga., when she was filming a movie, [“The Last Song”], there. We have been really close ever since. I’m a fan of hers in general.”

The executive added that the Superstar Award, which for the first time was bestowed on a team of two, came at an auspicious time for the duo. “Marc and I are celebrating the 30th anniversary [of our business partnership] in March,” said Duffy, who arrived at the soirée alongside a baseball cap-clad Jacobs. “It’s nice that they honored both of us. It’s sort of a new beginning — we are not at Louis Vuitton anymore, and we are concentrating on Marc Jacobs.”

Several big names from the footwear world showed up to cheer the honorees, including Sam Edelman, Rebecca Minkoff and Brian Atwood. Atwood told Spy he’s a longtime fan of Marc Jacobs — the brand and the designer. “I love that [Marc] always has such passion in what he does, and he isn’t afraid to do what he believes in,” Atwood added. “He never compromises that, and that is very respectable.”