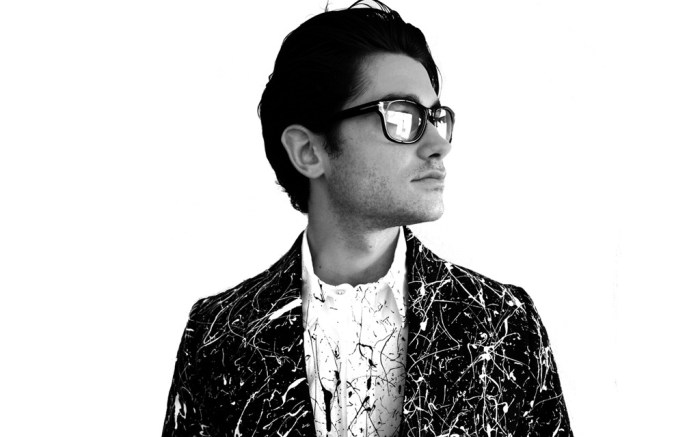 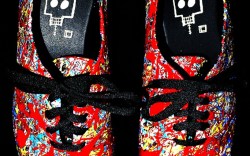 Cameron Helm didn’t set out to be a footwear designer, but as is the case with many works of art, happy accidents led to artistic discoveries.

While working on his canvas paintings, the artist noticed interesting patterns that formed on his shoes as paint dripped from the canvas onto his feet. “I liked the way it looked, and it came to me — what if I used my shoes as my canvas?” he said.

Helm began to experiment on his own shoes and started wearing them to events around Los Angeles. His unique footwear quickly garnered attention. “I’d walk around different department stores and everywhere I would go, people would ask where I got my shoes and how they could get a pair,” he said.

Soon, Los Angeles art lovers commissioned Helm to produce clutches, handbags and dresses. “All of a sudden, a bunch of people started contacting me,” he said. “It was very organic.”

As word of mouth spread, celebrities, too, came to Helm for custom footwear and clothing. His designs have been seen on the likes of Lindsay Lohan, Rufus Wainwright, Chris Brown, Isabelle Fuhrman, Michael Yo, Cameron Silver and NBA player Russell Westbrook.

In late 2012, Helm decided to formally enter the footwear realm. He found a factory in downtown Los Angeles to produce his shoes, designed his own last shape and sourced specific leather for its ability to absorb paint.

And because the shoes are all hand-painted, Helm had to train the shoemakers to mimic his unique process. “It’s a technique I developed over time as I was working on my shoes,” he said. “It creates the consistency of each pattern on each shoe.”

The collection is expected to launch for spring ’14 with a range of silhouettes, including unisex sneakers and oxfords, as well as several styles for women priced at $675 to $750. The shoes will first be available on his own e-commerce site.

Helm said the key to his line going forward would be his commitment to abstract expressionism, and transforming footwear into wearable pieces of art. “I want people to see my product and say that’s a Cameron Helm right off the bat,” he said. “I want the product to speak for itself.”

Each pair of shoes comes with a card of authentication, and the shoebox itself is a piece of artwork. “The tops of the shoeboxes are hand-painted and are meant to be collected. They can even be hung on the wall as a piece of art.”

And while Helm has found his expertise as an artist to be instrumental in his work as a shoe designer, he has also learned that working with shoes has inspired his canvas paintings. “When I work on the canvas, it’s better now because I don’t think about it [as a canvas] anymore, and [my work] becomes more surreal and more true to abstraction,” he said. “It develops the artwork into a different life form. I use a lot of my canvas work as experimentation for my shoes and my clothes. There is no restraint on what’s right or wrong. It’s a really good relationship [between my footwear and my art].”